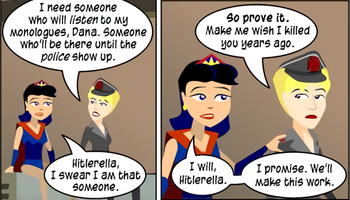 One night battles are okay, but you also want an enemy who cares.
"[Aziraphale was] The Enemy, of course. But an enemy for six thousand years now, which made him a sort of friend."
— Crowley, Good Omens
Advertisement:

Antagonists have many potential on-screen relationships — white-hot hatred, deep-seated desire for revenge, well-concealed sexual attraction, or bitter contempt — but one of the rarest and most satisfying is not hostility at all, but... friendship. Essentially, a platonic Foe Romance Subtext.

Over the years, a Hero and their nemesis will share trials, failures, and successes at each other's hands, each becoming enormously important in the other's life and more intimate (not that kinda intimate! ...Well, usually) than many best friends. Over the course of a series' many Story Arcs, the two will develop a grudging respect for them as a Worthy Opponent. It can sometimes grow to the point that the villain will refrain from killing the hero in a "cheap" or dishonorable way, and even start to concoct bizarre excuses to avoid doing so entirely, spare his life, or even saving them. In these cases, the hero and villain are very likely to become strange bedfellows to beat a new villain who doesn't play by the rules, which may lead to Fire Forged Friendship. Sometimes, the villain will decide to admit to the friendship and perform a full Heel–Face Turn. If another villain kills the hero, this one may make sure that the hero doesn't die alone, and the hero will do the same for them.

Even if the villain doesn't switch sides, it's not impossible for both to be friends "off the clock", or take time out of their latest fracas to Go Karting, or share a meal, or run errands together.

Other times, the opposite happens. A villain may notice that this is weakening him against the hero, and he'll promptly jump off the slope that they've been slowly climbing and undoing seasons worth of Villain Decay by doing something truly vile, like stuffing the hero's girlfriend in a fridge, or just plain pulling out new and lethal tactics when the hero is expecting the same old Harmless Villain.

In these relationships, the hero rarely stops trying to catch the villain, while simultaneously making his capture a personal quest or mission. Needless to say, humanizing a person whose capture you've objectified can complicate your priorities.

Related to Worthy Opponent. Compare Affably Evil and Opponent Instruction. Contrast It's Not You, It's My Enemies, Big Bad Friend, Go-Karting with Bowser, and With Friends Like These.... See also Did We Just Have Tea with Cthulhu?. See Dating Catwoman for the (explicitly) romantic version. Often goes well with Antagonist in Mourning. Frequently the target of Foe Yay Shipping. Has nothing at all to do with attacking your teammates, nor with Helpful Mooks. There is also the Friendly Rivalry which is essentially a milder version of this trope where the antagonistic characters are just competing (in some kind of sporting event, for example) rather than trying to thwart each other.