Freeze-Frame Bonus
aka: Blink And You Miss It 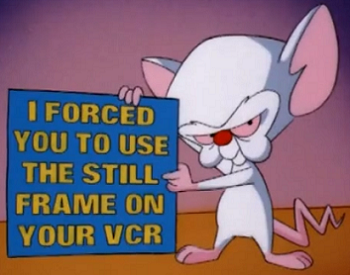 What's a VCR?
"Back when I was writing and producing Dharma & Greg, the only way to read my cards was to record each episode on a VCR and hit the "pause" button. This was not an easy task. The image wobbled like crazy making the tiny words of my weekly tomes very hard to see."
— Chuck Lorre Productions, #182

In video, sometimes the screen will show something so briefly that you cannot tell what it is unless you play the video in slow motion, pause it or go frame by frame on a CAV encoded Laserdisc. Often it turns out to be a joke or a Shout-Out, though it can sometimes be used for Foreshadowing in more continuity-heavy works.

Unreadably Fast Text is a subtrope of this.

Also called a "Blink And You'll Miss It" moment.

(It's often good to link to pictures or actually describe what's seen when giving examples of this trope.)

Compare Easter Egg, Blipvert, Subliminal Seduction (when it happens in-story) and If You Can Read This.

Alternative Title(s): Blink And You Miss It