A God Am I
aka: God Complex 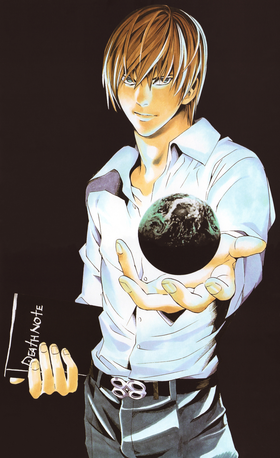 He's got the whole world in his hand.
"Because you are haughty of heart, you say, 'A god am I! I occupy a godly throne in the heart of the sea!'"
— Ezekiel 28:2, The Bible

When a villain, often the Big Bad, gains superhuman abilities or achieves their dearest dream, one can expect them to gain delusions of godhood.

They will often give an over-the-top speech emphasizing just how far beyond ordinary humanity they have evolved, and how lowly they are compared with him. Cue the villain becoming a megalomaniacal Narcissist who is Drunk on the Dark Side and/or declaring that they will Take Over the World.

But you know what they say... Pride cometh before the fall. If they're declaring themselves as a god right in front of a real God, then they’re definitely screwed.

The character may declare that they have transcended morality as well, and is Above Good and Evil, but the tropes do not have to coincide.

Aiming for godhood by rewriting the rules of the world is In Their Own Image. Another alternate version is the "End of the World" Special. See Physical God for those who don't have to try so hard, and Godhood Seeker for those who are quite aware that they're mere mortals and want to change that. May, but does not always result in a God-Mode Sue. It’s also fairly common among Complete Monsters, but not every character with this belief qualifies. Also, see It's All About Me for a similar trope, minus the declaration of godhood.

Ancient sovereigns liked this trope; see also God-Emperor for those examples. See also One-Winged Angel, Smug Super, Dark Messiah. Very common with the Satanic Archetype. Also see Like a God to Me, which is when a character declares someone else godlike but only out of flattery, not as a statement of serious worship. Not to be confused with God Guise, where a character merely pretends to be a god as part of a con. A Straw Nihilist may also have megalomaniacal delusions and believe themselves to be immortal, but never claims to be a god and in fact insists that gods don't exist.

Compare Devil Complex, when a character proclaims to be Satan instead, a behaviour that is usually just as narcissistic but also combined with the sign that the character in question values depravity, sadism and suffering. Contrast with A God I Am Not (where a genuinely godlike being refuses the label to avoid the implications), Stop Worshipping Me (where a deity doesn't want to be venerated as such), Pro-Human Transhuman (where a post human remains sympathetic to humanity), A God Is You (where you are cast as a god, or your Player Character is a god) and Unwanted False Faith (where a human (or transhuman, or other sapient) who is worshiped as a god would rather not be).

Note that this trope requires a self-proclamation of godhood, not just sheer cockiness and/or overconfidence.note The actual words "I am a god" are an easy indicator, but not absolutely necessary. Speaking of oneself in more subtly deific terms is quite sufficient. Possessing or gaining godlike powers by itself doesn’t count, nor is it a requirement to possess such powers to qualify for this trope. Usually being a Physical God and declaring oneself to be a God isn't this trope unless the physical gods in the setting are not omnipotent while this particular one believes it is omnipotent.

The technical term for this is suitheism (when one believes they are a god, but admits others exist) or autotheism (when they believe they are divine and worship themselves).

While all of the Seven Deities have this belief to different extents, their leader is the most convinced by this, Deus believing himself to be the highest authority over the Earth and all who dwell on and above it. Considering his affinity is towards the mantra of pride, this works to his advantage.

While all of the Seven Deities have this belief to different extents, their leader is the most convinced by this, Deus believing himself to be the highest authority over the Earth and all who dwell on and above it. Considering his affinity is towards the mantra of pride, this works to his advantage.