"Our people have walked this land for many, many years, and in that time have learned much about the world. Our allies will need to look to us for wisdom and guidance. My father once made a promise to the Horde, to repay a debt we owed them for their service to our race. I, for one, intend to deliver on that promise."
— Baine Bloodhoof, High Chieftain of the Tauren

The Icon of the Earthmother

The plains of Kalimdor have long been a home to these tremendous nomads. The tauren (Or Shu'halo, in their native tongue) are a race of shamans, hunters, and warriors who long ago developed a complex culture and system of living without the aid of stonework, steel or conquest. This is not to say that the tauren are a race of pacifists, for when they are angered they are capable of retaliating with swift and decisive brutality. Tauren are, in a word, stoic, embodying the strong and silent type with their quiet contemplation. This introspective air combined with their immense size can lead a person to understand as to "why" many regard the tauren as a wise and dangerous race.

Tauren rarely speak unless there is a true reason to, preferring to act instead of talk. However, once a tauren has learned to interact with a companion, there seems to be a more open and enthusiastic exchange of words. Since tauren warm slowly to non-members of the Horde, they are usually silent and may sometimes appear brooding. Having become members of the Horde, the introspective race has been involved in more and more conflict, creating a demand for tauren warriors and healers. Some, such as the Ragetotem and Stonespire tribes, gladly throw themselves into the throngs of combat. Others, such as the Runetotems or Skychasers, must spend time putting great thought into the actions they perform on the field of battle. Taking another life, whether it is man or beast, is an act filled with great significance and responsibility to most tauren.

For all of recorded history, the tauren were nomads, constantly wandering the grassy savannahs of the Barrens, before Thrall and the Horde arrived on Kalimdor. Thrall found a tauren and a centaur fighting and opted to help the tauren out with the violent, cannibalistic centaur and earned the notice of Cairne Bloodhoof, chieftain of the Bloodhoof Tribe. After Thrall helped the tauren boot the centaurs our of their ancestral homeland of Mulgore, the tauren abandoned their nomadic lifestyle and set up the city of Thunder Bluff atop three tall mesas in Mulgore. 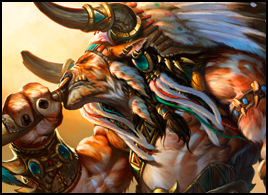 Okay Blizzard, is he awesome or is he not? Trust me, we want to love him.
"The world is torn, and our Horde allies have turned down dark paths. We must guide them. Even in the darkest hour, we will bravely hold our heads high, and honor the Earth Mother in all we do."

Cairne's son, and the new Chieftain of the Tauren Tribes, after Cairne's demise. Baine despises Garrosh's leadership, but knows that if he were to leave the Horde or disobey Garrosh's orders that the orcs would attack without mercy, and the tauren would stand no chance against them. So, grudgingly, he has stood by Garrosh and has tried his best to advise him wisely as his father might have.

Things turn downhill for Baine when Garrosh bombs Theramore. Baine swears to Garrosh that, if he were to do something like this again, he would not stand by him any longer. And indeed, as of Garrosh's exploits in Pandaria, he was the second leader (after Thrall) to personally support Vol'jin's rebellion, fueling it with supplies and warriors from Thunder Bluff. 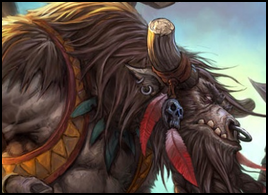 Back in his day, they didn't have plural.
"There's no need to coddle me, boy. I may be old, but I'm not helpless."

Leader of the Bloodhoof tauren and ruler of Thunder Bluff. With the help of Thrall and his Horde, Cairne succeeded in driving the centaur from Mulgore, where the tauren city of Thunder Bluff would be established. In return, he accompanied Thrall on his quest to find Grom Hellscream and the Oracle Medivh, and he was also part of the resistance against Archimonde in the Battle of Mount Hyjal. Owing a blood debt to Thrall, he pledged his allegiance to the Horde.

Prior to the events of Cataclysm, Carine died in a duel with Garrosh Hellscream. While the duel was meant to be an honourable battle, Garrosh's weapon was unwittingly poisoned by Magatha Grimtotem. His son Baine has since taken over as chieftain of the Tauren. 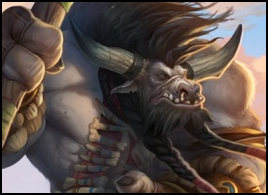 He, most of all, has the right to Bear arms.
"Nature seeks balance in all things."

The tauren archdruid of the Horde, a student and friend of Malfurion Stormrage, and childhood friend of Cairne Bloodhoof. He represents the Horde within the neutral Cenarion Circle faction. 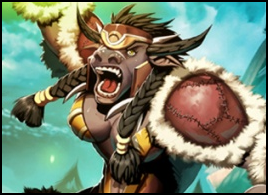 Dark fur, ominous name, no, she's totally not the Token Evil Teammate.
"What brings you to old Magatha?"

The leader of the Grimtotem Clan of Thunder Bluff, a group of incredibly aggressive and supremacist taurens who contrast with their peaceful counterparts. She became matriarch of the clan through an arranged marriage with its previous leader and has taken complete control since his death in a "climbing accident." Her hatred of Cairne is no secret, and it is rumored that she is secretly plotting against him.

As of Cataclysm, Magatha has indeed shown her true colours. She secretly riggs a duel between Garrosh Hellscream and Cairne Bloodhoof, leading to the tauren cheiftain's death. In the confusion following, her Grimtotem clan take over Thunder Bluff, but she is quickly deposed by Cairne's son Baine, who exiles her and her tribe as punishment. She later shows up to 'aid' the player in stopping the Twilight's Hammer in Thousand Needles, though to what ends is currently unknown... 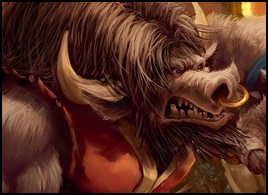 Anyone wanna level 1 raid him?
"Many times have I fallen at the hands of an orc, and many times have I risen again. But NEVER again. For every orc that struck me, I will cleave a thousand of their skulls. This. Ends. Here... I, Gamon, will save us!"

Originally a minor NPC created to help Horde Rogues learn their Pickpocket ability, Gamon rose to meme status when players discovered anyone could attack him — it was incredibly common to hear Gamon's death cries the moment he respawned. Come Cataclysm, he became a powerful elite NPC, but still had no role in the storyline.

That all changed with Mists of Pandaria, when Gamon began appearing as a much more serious character. In patch 5.3 he fought against Garrosh's Kor'kron which had begun subjugating the city. 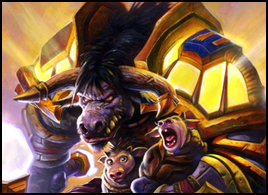 He bears the brunt of the Tauren's Butt-Monkey status.
We live, we fight, we die. The tricky part is finding a reason to do each of those.

Sunwalker Dezco is a tauren Sunwalker and the chieftain of the Dawnchaser tribe. He was dispatched by Baine Bloodhoof to the myth-shrouded land of Pandaria to follow the visions his wife Leza had received. Dezco later works alongside Anduin Wrynn to convince the August Celestials to open the gates to the Vale of Eternal Blossoms, where he becomes the de facto leader of the Horde's base within.