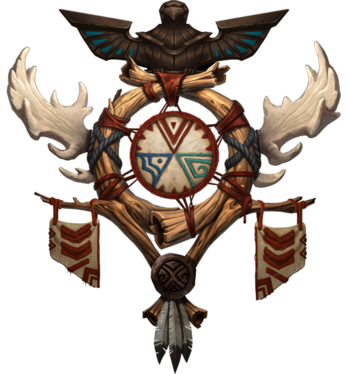 The Highmountain tribe has historically been an alliance between three separate local Tauren clans: the Bloodtotem, Rivermane and Skyhorn. In the wake of the the defeat of the Burning Legion, the Tauren of Highmountain sought to rekindle their bonds of kinship with their Kalimdor-based brothers and sisters. After the Horde players, alongside Baine Bloodhoof, root out Old God corruption within Highmountain, Mayla and her coalition opt to join them in the Horde.

Tropes that apply to The other Horde Tauren

also tend to apply to the Highmountain Tauren, with few exceptions. Tropes exclusive to them: 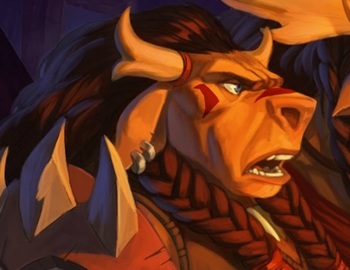 "Together, we are Highmountain."

The current High Chieftain of the Highmountain Tauren, who inherited her position after the murder of her father Ulan Highmountain when confronting Dargrul the Underking. She, as the chieftains before her, is a descendant of the great hero Huln Highmountain who fought in the War of the Ancients.

The chieftain of the Skyhorn tribe, a tribe of hunters and eagle riders. A complete contrast to Torok Bloodtotem (and most of the other rather dour Highmountain), Lasan is a jovial, boisterous fellow and is rarely seen without his eagle mount and companion, Aviash. He is the most eager to reaffirm his loyalties to Highmountain and bring the fight to the Burning Legion.

In Battle for Azeroth, Lasan joins the Horde as the rest of the tribes do, often representing them in the field. He joins Rokhan, Thalyssra, Nathanos, and the player in freeing Princess Talanji and Zul the Prophet from a prison in Stormwind, providing both the transport to Stormwind, and aerial support to the escape. He can later be found in Zuldazar, admiring the Zandalari's pterrordaxes and expressing interest in challenging the Zandalari Pterror-Riders to a race.

While Spirit Walkers as a whole are generally reserved, macabre, and strange, something just never seemed right about Ebonhorn, the eldest of the Spirit Walkers and right-hand of the High Chieftain. As it turns out, suspicions were correct.

Ebonhorn is, in actuality, a black dragon named Ebyssian. Born shortly after the War of the Ancients, Huln Highmountain used the Hammer of Khaz'goroth to banish Deathwing from the Broken Isles and hatch a single egg from Deathwing's brood free of its father's corruption. Named Ebonhorn by Huln, Ebyssian swore eternal loyalty to Huln Highmountain and his descendants, and watches over the Highmountain Tribe of Tauren to this day.

The fact that he is a dragon is kept secret from most of Highmountain's inhabitants. Only the High Chieftain is permitted to know, when he leads them into Neltharion's Lair to tell them the secret history of Huln and himself, and names them High Chieftain.

While he was born without his father's corruption, his natural closeness to the Earth element still makes him more vulnerable to their whispers than most. When he leaves Highmountain with Mayla to attend a feast in Thunder Bluff, protective wards installed by Huln weaken, and he becomes comatose. Baine Bloodhoof and the player character spirit him back to Highmountain, and combat the Necrodark, a clan of Drogbar corrupted by N'Zoth. When the final confrontation comes, Ebonhorn sheds his visage to do battle with a giant C'Thraxxi, and slays it. The wards restored, Ebonhorn returns to his post in Highmountain.

When the Dragon Isles reawakened, Beyssian and Wrathion traveled together and discovered Neltharion's hidden legacy; the Drakthyr. The two black dragons acted as guides to integrate the drakthyr with the modern world, with Ebyssian introducing some of the Drakthyr to the Horde while also warning the Horde of the Primalist threat. 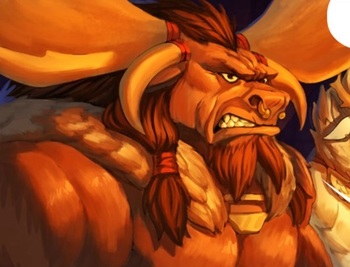 "Does such weakness pass as strength where you come from?"

The chieftain of the Bloodtotem tribe, a Highmountain tribe known to be highly distrusting of outsiders.

During the course of the Highmountain storyline, Torok and his tribe reveal that they have allied themselves with the Burning Legion and transform into the "Feltotem". He's killed by the player with the aid of Drogbar leader Navarogg.

"Though some of the other Highmountain look down on us for our peaceful way of life, we provide them with most of their food and heal the wounds of battle. Those calves need to show some respect for their elders"

The chieftain of the Rivermane Tribe, a Higmountain tribe of farmers and shaman.