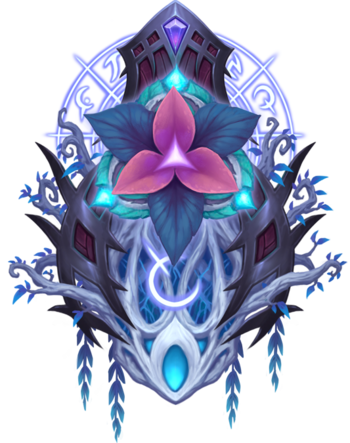 The Nightborne, also called shal'dorei, are a powerful and mystical race of elves, transformed from the night elves of the ancient city of Suramar on the Broken Isles, shrouded in ten thousand years of history. During Legion's invasion, Grand Magistrix Elisande intended to forge an alliance with the Burning Legion, which intended to use them as pawns in the largest demonic invasion of Azeroth yet, all to preserve their civilization. The city of Suramar served as a max-level zone for the Legion expansion of World of Warcraft.

The Dusk Lily represents a rebellion among the Nightborne, led by First Arcanist Thalyssra. The player aids and allies themselves with this rebellion, removing Elisande from power, destroying the Nightwell, and freeing the Nightborne from their addiction to magic through the Arcan'dor, a tree with Mana-bearing fruits. After goodness is returned to Suramar, Thalyssra seeks allies in the Horde, whose leadership showed her people compassion and pity, as opposed to the Alliance leadership who offered dismissal and skepticism, despite Alliance adventurers aiding in the rebellion. Suramar subsequently joins the Horde, and the Nightborne become a playable race to Horde players who have completed the questline.

First Arcanist Thalyssra is the leader of the nightfallen rebellion against the nightborne of Suramar, who have largely allied with the Burning Legion. She was once a close adviser of Grand Magistrix Elisande, but was betrayed by Advisor Melandrus during an attempted coup d'état was left for dead. She ended up outside Suramar and started forming the rebellion. She is later present when Gul'dan falls, and the Nightborne are freed.

She spearheads the Nightborne's efforts to join the Horde after encountering dismissal at the hands of Tyrande Whisperwind, who accused her of becoming the next Elisande or Azshara. By contrast, Lady Liadrin offered Thalyssra's people direct aid during the Rebellion, offering respect and friendship instead of dismissal. Thalyssra visited Silvermoon on Liadrin's behest, and joined the Horde proper when seeing that the Horde values independence and offered them freedom to practice their magic.

In Battle for Azeroth, Thalyssra accompanies the player, alongside Rokhan, Nathanos, and Lasan Skyhorn in an infiltration of Stormwind to free the imprisoned Zandalari ambassadors, Princess Talanji and Zul the Prophet. Her mastery in illusion and barrier magic proves instrumental in their escape, and they escape to Zuldazar successfully to help establish Horde relations with the Zandalari Empire.

Arcanist Valtrois is a Nightborne quest giver and assistant of Thalyssra. She has something of a haughty and proud personality. Even while semi-Withered, she retains her posture and attempts to keep her appearance up. When she is cured of her addiction by the Arcan'dor, the first thing she does is run her fingers across her cheeks, and lament that Mana is wonderful for the skin.

Don't let this fool you, however. Valtrois is very adept in Arcane arts, particularly those pertaining to Mana manipulation and ley lines. The player assists her in redirecting the ley lines into the Arcan'dor chamber. Later, after the Nightborne join the Horde in Battle for Azeroth, she serves as an agent on Zandalar, impressed by the Troll's empire but haughty as ever, and can be recruited to fight the Alliance in missions.

Before the shield around Suramar City was raised, Oculeth maintained a workshop named after him and a teleportation network around the city which fell out of use. Banished for resisting the Legion takeover of the city, his work was still vital to the Nightborne, who made an effort to loot the structures connected to his old workshop's network while Oculeth himself joined the Nightfallen Rebellion.

In Battle for Azeroth, when the Nightborne join the Horde, Oculeth serves to enhance the Horde's network of portals. Surprised that the Horde hasn't established a Bureau of Telemancy, he properly anchors the Honorbound's portal supply line to Dazar'alor and maintains them with routine maintenance.

An exiled nightborne encountered by the player in Azsuna.

A Nighborne noblewoman and an ally of Thalyssra. She becomes an Advisor in order to keep Thalyssra and the other rebels abreast of developments in their enemy.

Grand Magistrix Elisande was the ruler of Suramar and as such was leader of the Nightborne elves on the Broken Isles. During the Burning Legion's third invasion of Azeroth, Elisande allied herself with them, seeing no other option. She serves as the primary antagonist for the Suramar campaign and Nighthold raid, and is killed, replaced by Thalyssra as leader.

The captain of the city watch of Suramar for thousands of years, who switches sides to the rebellion down the line after Elisande commands the slaughter of civilians. Victoire proves a valuable ally that aids in both recruiting new members for the rebellion and saving hostages.