"We came to this world as exiles and outcasts, but together, we can be more. A weapon to break the chains of oppression. A bastion for the hunted and the lost. A family bound by blood and honor. And if our enemies do not give us peace, we will give them war. Victory or death - this I pledge as your Warchief. Until the end of days, I live and die, FOR THE HORDE!"
— The sentiment of Warchief Thrall 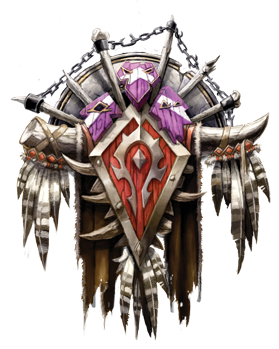 Banner of the Horde

The Horde is one of the two major political factions of the mortal races in Azeroth, its counterpart being the Alliance, centered on the western continent of Kalimdor. Driven by unity, the Horde consists of a coalition of disparate races and cultures loosely joined in an alliance of convenience against a hostile world that would see them destroyed. A faction led by off-worlders and composed of outsiders, the Horde has survived the obstacles of Azeroth by bonding together, fighting as family, comrades, or even uneasy allies. Focused, ferocious, and sometimes monstrous, the Horde values strength and honor and is relentlessly opposed to any who threaten the ideals of freedom and hope, but struggles to keep aggression in check.

Unlike the Alliance, which has remained somewhat consistent throughout the years, the identity of the Horde is always in flux, changing depending on circumstances, leadership, and plot convenience. Starting off as a war machine under the thrall of the Burning Legion, meant to weaken Azeroth before the coming of the demons, the Horde has since then thrown the shackles of oppression and rebuilt itself as an independent force, which now protects its new home from the likes of its former masters. However, not everyone considers its people redeemed, for even when freed from demon corruption, the Horde has neverthless turned to its warmongering ways on numerous occasions, resulting in civil wars, revolutions, and subsequent reformations.

However, no matter its leader, whether good or evil, pragmatic or idealistic, the Horde still maintains certain values that keep it distinct. Above all, it is a faction of outcasts: whether abandoned by their loved ones for becoming monsters, ostracised for usage of forbidden magic, or hated for their dark past, all races of the Horde have experienced loss, and work together because they have nowhere else to go. As a result, the Horde is a much more tightly knit faction than the Alliance: Orgrimmar, the Horde's capital, is a vast multicultural metropolisnote Orcs, trolls, goblins and Huojin pandaren call it home; the Forsaken live there as refugees after Lordaeron, and even tauren and blood elves have their districts and embassies there. By contrast, none of the Alliance capitals houses more than two or three races., and the faction as a whole possesses a strong central leadership, whether a single Warchief or a small council, unlike the more loosely allied kingdoms of the Alliance. Whether it's heroic or villainous, the Horde is also always the warlike faction: its people, hardened by years of suffering, understand that at times, violence is the only solution to problems.

The Horde of Kalimdor

The heroic Horde, formed on the continent of Kalimdor under the leadership of Thrall after he led remnants of the Old Horde out of the Alliance's prisoner encampments in the Eastern Kingdoms. It later expanded to other races of Azeroth, opposes the Alliance and forms the playable Horde races in World of Warcraft.

Initially, the Horde was a villainous faction corrupted by demons. Later on, after the Horde's redemption, not all accepted the Horde as it is. The Horde has a painful history of infighting and betrayal, and those folk often form their own splinter groups.
General Tropes