The island nation of Kul Tiras is located west of the Eastern Kingdoms. The Kul Tiran naval fleet comprised the bulk of the Alliance's naval power during the Second War. It was led by Lord Admiral Daelin Proudmoore in the Second War until his death shortly after the Third War. Since then, little contact has been had with Kul Tiras or its people. However, some of Daelin's remnant forces remained in Kalimdor to stir up trouble, while Baradin's Wardens (a force made of both Stromgardians and Kul Tirans) have been actively trying to keep their hold on the island of Tol Barad against both corruption and the Horde.

The expansion Battle for Azeroth features Kul Tiras as a continent for Alliance players, composed of three zones: Tiragarde Sound, Drustvar, and Stormsong Valley. Within Tiragarde Sound resides Boralus, capital of Kul Tiras. Kul Tiran humans are also unlockable as an allied race later in the expansion, using larger and heavier models than the regular humans.

Grand Admiral of the Alliance 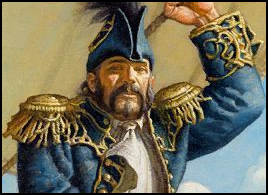 "Can your blood atone for genocide, orc? Your Horde killed countless innocents with its rampage across Stormwind and Lordaeron. Do you really think you can just sweep all that away and cast aside your guilt so easily? No, your kind will never change, and I will never stop fighting you."

Following the Third War, he personally took charge of an expedition to sail west and locate the refugees Jaina took with her from Lordaeron. Finding the orcs settling there, Daelin took over Theramore and began preparations to exterminate them, ignoring his daughter's pleas. Desperate to help the orcs survive, Jaina helped Rexxar and the Horde into Theramore, where Daelin was slain.

Katherine Proudmoore is the Lord Admiral of Kul Tiras following the death of her husband, Daelin, as well as Jaina's mother. After learning of her daughter's inaction during Daelin's invasion of Durotar that has led to his demise, she has decided to cut all ties to the Alliance, and has exiled Jaina once she came asking for help on their behest, being influenced by Priscilla Ashvane, who has been her longtime friend.

See his sheet on the The Forsaken page.

Archmage, Ruler of Theramore, Leader of the Kirin Tor 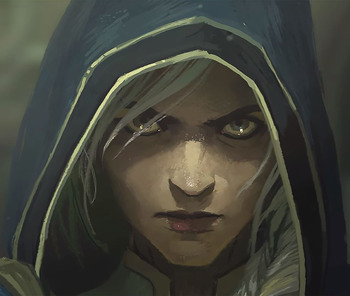 "Beware, beware, the Daughter of the Sea..."
"You spit on mercy? Then you will have NONE. You want carnage?! Garrosh will get more blood than EVER he bargained for!"

Daughter of Daelin Proudmoore, ruler of Theramore, and one of the few humans that believe that peace can be attained between the two factions. During Warcraft III Jaina was introduced as a young and idealistic mage, and Arthas's former girlfriend. Unfortunately, she became unable to stomach his growing corruption, and at the advice of the mysterious Prophet she led a sizable human contingent to the lost continent of Kalimdor. After a series of battles Jaina formed an alliance with the Horde and Night Elves, and fought bravely in the final conflicts of the Third War. Afterwards, she and her people founded the island city of Theramore and sought peace with the Horde.

Despite quite possibly being the most reasonable human leader, things never seem to go Jaina's way. Some time after the battle of Mount Hyjal the navy of Kul Tiras, led by her father, took over Theramore and pushed for renewed war with the reformed Horde. Jaina, unable to convince her father that the Horde had changed, was forced to choose her peaceful ideals over her own family, and allowed the Horde's champion Rexxar into Theramore, where he killed her father. In spite of her experience and foresight she is very much the junior player in the modern Alliance, compared to Stormwind and its returned king Varian Wrynn. By the time of Wrath of the Lich King Jaina is more or less the sole Alliance leader (or at least the only one who gets any screentime) terribly interested in peace, actively defying Varian Wrynn when he seeks to wage war with the Horde.

This changes radically after the events of Cataclysm. After the defeat of Deathwing, the Garrosh-led Horde bombs Theramore and reduces it to ashes, leaving only a few survivors (her included) who were teleported away by the Kirin Tor. Enraged and horrified by the deaths of her friends and the loss of all she had worked for, Jaina proceeds to try and use the Focusing Iris, the arcane artifact used to power Garrosh's mana-bomb, to flood Orgrimmar and kill everybody in the city. She is talked out of it at the last minute by Thrall and Kalecgos, but she still cuts off her friendship with Thrall, considering him partially responsible for the tragedy, as he chose Garrosh as his replacement despite knowing of his hatred for the Alliance. Her rage now contained and to make up for the atrocity she was about to commit, she rejoins the Kirin Tor as an apprentice, but is surprisingly made its new leader, replacing the deceased Rhonin.

Soon thereafter, she finds herself forced to purge Dalaran of the Horde, as Dalaran's portals were used by the Blood Elves to bypass her wards around Darnassus and acquire the Divine Bell. As such, she fully pledges Dalaran to the Alliance again. These continuous disappointments have all but shattered Jaina's peaceful ideals, and she has since then acquired a much harsher view on the Horde, transforming into a warmonger even more zealous than Varian ever was.

In Legion, Jaina has abdicated her leadership of the Kirin Tor and has left Dalaran entirely in protest of the Council of Six's vote to allow the Horde back into the city.

In Battle for Azeroth, Jaina returns to her homeland of Kul Tiras on a diplomatic mission to negotiate the islander kingdom's re-admission into the Alliance, where she receives a less-than-warm welcome due to her involvement in her father's death and is promptly exiled to Fate's End by her mother, Katherine. Later on, after the internal crises of the nation are solved, Jaina is rescued from Thros by her regretful mother and an Alliance emissary and ascends to the position of Lord Admiral of Kul Tiras after Katherine steps down.
For tropes regarding Jaina, see her character page here. 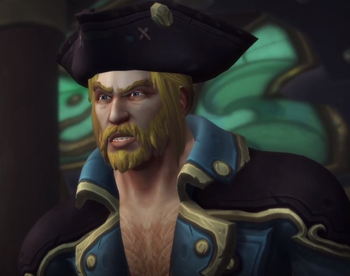 Tandred Proudmoore is the son of Daelin and Katherine, and brother to Jaina and Derek. He was lost at sea in a mighty storm some time ago.

Taelia is a young woman living in Kul Tiras as a ward of House Proudmoore. However, she is not Kul Tiran herself; her mother was from Lordaeron and her father, Bolvar was a knight of Stormwind. Taelia arrived in Kul Tiras as a child during the Third War, where she was taken in by House Proudmoore and her guardian Cyrus Crestfall was personally assigned by Daelin himself. As for her birth parents, all she knows of their fates is that her father died helping to defeat the Lich King Arthas, but is not yet aware of the fact that he succeeded him at the Frozen Throne.

Formerly one of Daelin Proudmoore's most trusted knights, he was entrusted with raising Taelia and retired to become harbormaster of Boralus.

A scoundrel hired by Cyrus to help break the player out of prison. 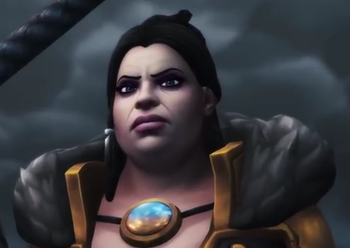 Priscilla Ashvane is one of the most influential people in Kul Tiras, being the head of Ashvane Company and has control over the financial matters of the nation, and therefore, an ability to buy the loyalty of anyone that she sees as an asset. A longtime friend of Katherine Proudmoore, she uses her relationship to influence the Lord Admiral for her own personal agenda.

Harlan Sweete is the leader of the dreaded Irontide Raiders, a group of pirates that has taken over the free city of Freehold in Kul Tiras. He has aligned himself with Lady Ashvane and supports her attempt to seize leadership of all Kul Tiras.

Wife of Lord Arthur Waycrest, Meredith is the head of the Heartsbane Coven, a group of witches using Drust magic in order to take over Kul Tiras.
Lucille Waycrest

Lucille Waycrest is the daughter of Arthur and Meredith Waycrest, and forms the local resistance known as the Order of Embers against the Drust incursion in Drustvar.

Everit Reade is the marshal of the Waycrest Guard and leader of Drustvar's military forces.

Ruling lord of Stormsong Valley and leader of the Tidesages.

Brannon is the young nephew of Lord Stormsong and his presumed heir. He was put in charge of Anglepoint in Tiragarde Sound to gain experience as a leader.

An elderly and respected member of the Tidesages in Brennadam. When he learns of the Tidesages' corruption, he starts forming a rebellion known as the Storm's Wake with the help of Taelia and a foreign adventurer.

A worker at Mariner's Strand who joins up with the Storm's Wake rebellion hunting down the corrupt Lord Stormsong after being freed from the Tidesages.

Ulfar is the last of the Drust druids and the leader of the Thornspeakers, an order of Kul Tiran druids based in Ulfar's Den in Drustvar, who train in the old ways of the Drust from before the time of Gorak Tul. He is the last Drust of this organization originally created by his people. Ulfar does not think highly of Gorak Tul, and believes Tul's twisted ways have disgraced their kind.

Warcraft III faction
The soldiers that Daelin Proudmoore brought to Theramore to destroy the horde once and for all.