Alterac as a whole
Located in the Alterac Mountains, the kingdom of Alterac's king, Lord Aiden Perenolde, joined the Alliance during the Second War but withheld much of its support. The reason was later revealed: Alterac had turned traitor and Perenolde was assisting the Horde. After the war, the kingdom was fought over between the heirs of the kingdom and the kingdoms of Gilneas, Lordaeron and Stromgarde. While it is not known which of the kingdoms got to take Alterac, Warcraft III implies it to be Lordaeron. In World of Warcraft twenty years after Warcraft II, the remnants of Alterac formed the Syndicate, a criminal organization partially responsible for the fall of Stromgarde.
Aiden Perenolde 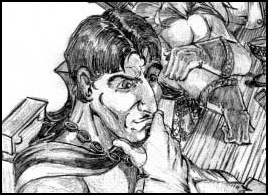 Could you look anymore treacherous?

King of Alterac during the Second War, Aiden Perenolde only reluctantly joined the Alliance, devoting the least resources to the war effort outside of Gilneas. Seeing the Horde's victory as inevitable, he seized the chance to betray the Alliance, letting the Horde through the passes of Alterac in exchange for the ensured safety of his land and people. Following the Second War he was put in house arrest with his kingdom being fought over by the other kings. During this time he had the Book of Medivh stolen and eventually passed it on to the Horde, in exchange for Deathwing destroying the Alliance forces occupying his nation. He died some time later under unknown circumstances.

Son of Aiden Perenolde and prince of Alterac. He tried to stake his claim on the throne after his father's betrayal in the Second War, but his bid was rejected. In the time afterwards he was mentored by Aedelas Blackmoore, who ran the orcish internment camps. In World of Warcraft he leads the criminal Syndicate in restoring Alterac to his rule. He is eventually slain by Horde adventurers in search of a memento of Thrall's old friend Taretha.

Arathor as a whole
Arathor, also known as the Empire of Arathor or the Arathi Empire, was the first of the human nations. It was formed during a period of time known as the Troll Wars, where humans and elves fought against the Amani trolls. The humans of the Eastern Kingdoms were initially divided into different tribes, but Thoradin, leader of the Arathi tribe, united them under one banner and was crowned king. The new nation known as Arathor then founded the city of Strom as its capital city. During the wars against the trolls, the humans of Arathor allied with the elves of Quel'thalas, who trained humans in the art of magic. Together they defeated the Amani trolls and ended the war.

Over more than a thousand years, Arathor expanded and founded cities around the Eastern Kingdoms. During this time, they also encountered the dwarves and formed a strong friendship with them. But as the empire grew, the various cities eventually split away into new nations, reducing the land and power of the empire bit by bit. Ultimately, when the royal family of Arathor left the empire to found Stormwind in the south, the once mighty nation of Arathor was reduced to the highlands around Strom and turned into the nation known as Stromgarde.

Thoradin was the leader of the Arathi tribe and the first king of the united human nation of Arathor. Seeing the scattered human tribes as unable to fight back against the overwhelming numbers of the Amani trolls, Thoradin united the humans over the course of six years. The Arathi outmaneuvered and defeated the other tribes, but spared the defeated and united them under his leadership. With the humans united and Thoradin crowned as king, he formed the fortress city of Strom as the capital city of his new nation. Hearing of the elves' plight in the fight against the trolls, Thoradin allied with the elves of Quel'thalas in exchange for them training 100 humans in the ways of magic. The alliance of men and elves eventually defeated the troll armies below the Alterac Mountains, using the combined magical powers to destroy them.

With the Troll Wars won, Arathor continued to prosper under Thoradin's rule, until one day he left to find the origins of humanity. His search eventually took him to Tyr's tomb in Tirisfal, where he ordered his mages to break the tomb's seals. While he found Tyr's remains there, he also awakened the Old God minion that had slain him. Thoradin died killing the minion, his sword Strom'kar buried in the creature's skull and preventing it from healing.

A warlord who served under Thoradin during the Troll Wars as one of his foremost generals. Ignaeus was a legendary warrior who wielded the great sword Trol'kalar and led Thoradin's armies into battle with the trolls, earning the name Trollbane. His descendants would eventually rule Stromgarde after Arathor decline and the royal family left it behind.

Dalaran as a whole
The magocratic city-state of Dalaran is ruled by the Kirin Tor, a magus senate led by a council of six mages, and was founded by humans and high elves alike. The kingdom's reckless use of magic attracted demons to Azeroth. To combat the demons in secrecy, Dalaran created the Council of Tirisfal to choose and empower a single mage as Guardian of Tirisfal. The last two guardians would, ironically, be the reason for the invasion of Azeroth by the demonic orcish Horde.

The kingdom was demolished by Archimonde in the Third War but it was later rebuilt. The kingdom has taken a neutral stance since Wrath of the Lich King in favor of working against the blue dragonflight and the Scourge. In Mists of Pandaria they once again commit to the Alliance war effort, following the death of Rhonin and the appointment of Jaina as the new head of the Kirin Tor. In Legion, the Council of Six votes to allow the Horde back into the city to help fight the Burning Legion, causing Jaina to take her leave. 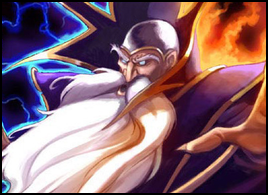 Best beware of him or he'll turn you into a mindless- Baaaaaah!

Grand Magus of the Kirin Tor and effectively Dalaran's official leader. Pledged Dalaran to the Alliance when he heard of the destruction of Stormwind at the hands of the Horde. Served as Jaina's mentor in the years following the Second War. During the Third War, he launched investigations into the supposed plague that was ravaging the northlands of Lordaeron, assigning Jaina with Prince Arthas to uncover the truth. He was ultimately slain in battle by Arthas himself when the Scourge laid siege to Dalaran. 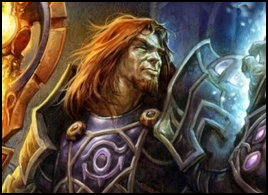 The new head of the Kirin Tor following the death of Antonidas and the one responsible for the Kirin Tor's newfound neutrality. While not a major character in the game, he has had quite a large role in the Warcraft Expanded Universe. His adventures are chronicled in Day of the Dragon, The War of the Ancients, and Night of the Dragon. 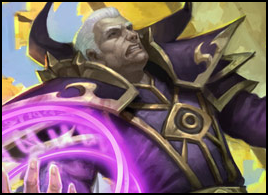 He's cool as a cucumber
“Sacrifice. To the young it means to change, but to the wizened it heralds an end. I know both meanings better than anyone else.”

At first Medivh's apprentice, Khadgar eventually becomes one of the most powerful wizards in the world. On discovering that Medivh is possessed by Sargeras and responsible for bringing the orcs to Azeroth, Khadgar betrayed Medivh to Lothar and, together with Lothar and the half-orc Garona, slew Medivh. Unfortunately, in doing this Medivh cursed Khadgar, then a young man, to age prematurely. The newly greybearded Khadgar went on to be the representative of Dalaran to Lothar, and an advisor to Turalyon. He was ultimately the one to destroy the Dark Portal that had brought the orcs into Azeroth, ending the Second War. Afterwards he was part of the Alliance Expedition into Draenor, where he played a key role, and destroyed the Dark Portal again, this time from the Draenor side.

Khadgar reappeared in The Burning Crusade, where it was revealed that he survived Draenor's destruction, made contact with the Naaru, and now helps to lead the forces of good on that world. He is later revealed in the novel Tides of War to have returned to Azeroth and taken a place among The Six of the Kirin Tor in Dalaran. In Warlords of Draenor, Khadgar is one of the Alliance heroes who goes back in time to Draenor in the era before the First War. On Draenor, he focuses his efforts on finding and eliminating one of the greatest threats in the history of Warcraft: Gul'dan.

In Legion, Khadgar becomes acting head of the Kirin Tor and reopens Dalaran to the Horde after Jaina leaves the city. He also moves the city closer to the Shattered Isles in order to better combat Gul'Dan's forces.

Gilneas as a whole

Kul Tiras as a whole

Lordaeron as a whole

Stormwind as a whole

Stromgarde as a whole
Renowned for its strict martial tradition, the kingdom of Stromgarde is based around the former capital of the original human Empire of Arathor, Strom. When it joined the Alliance in the Second War, it was led by Thoras Trollbane. While one of the Alliance's chiefest supporters during the war, it left afterwards due to disagreements over the taxes used for rebuilding Stormwind and the internment camps. Following the Third War, the nation fell to the Syndicate and Boulderfist ogres under unknown circumstances, with King Thoras Trollbane assassinated in-between the events of Warcraft III and World of Warcraft.

In World of Warcraft, Stromgarde's resources are constantly fought over between the Forsaken undead's Defilers and the human League of Arathor. Stromgarde's prince, Galen Trollbane, was slain in battle by Horde adventurers sent by the troll Zengu. In The Burning Crusade, Danath Trollbane, nephew of Thoras, was revealed to be alive and well on Outland. In Cataclysm, Galen Trollbane was raised from the dead and became part of the Forsaken, while Stromgarde remains in ruins.

The Alliance finally retakes and rebuilds Stromgarde in Battle For Azeroth, serving as the site of the first Warfront in the expansion.

See the Knights of the Ebon Blade's characters page. 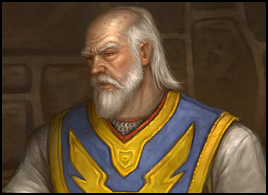 Nephew of King Thoras Trollbane, during the Second War he acted as Militia Commander of Stromgarde. Took part in the Alliance Expedition to Outland, where he served as tactical advisor to General Turalyon and Force Commander of the Expedition. He was presumed deceased following the destruction of the Dark Portal.

Following the Dark Portal's reopening, it is revealed that he and his troops have survived throughout all the years in Outland, himself leading Honor Hold. He has vowed to return to Stromgarde and help rebuild after he heard of the fate that has fallen on it, once he has finished his duties in Outland. As of Cataclysm, with the death of Galen Trollbane and his subsequent raising as one of the Forsaken, he is the last living heir to the throne of Stromgarde.

He later returns to Azeroth in Legion to fight off the demons' invasion and is seen scouting out the Broken Shore with Alliance Warriors. In Battle for Azeroth he finally returns to the reclaimed Stromgarde, protecting his restored kingdom against Horde invaders in the warfront and succeeds in the canonically ending.