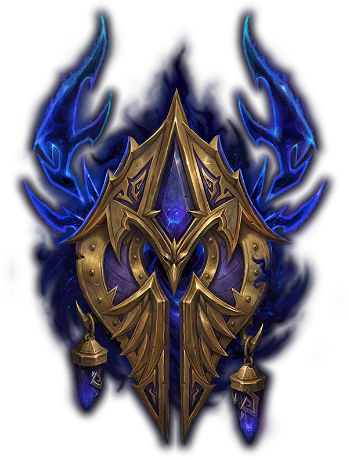 Icon of the Void

The high elves (Quel'dorei in their native Thalassian) of Quel'Thalas first appeared in the Eastern Kingdoms 7,000 years before the First War and mostly kept to themselves.

Its three-thousand-year-old king, Anasterian Sunstrider, honor-bound by a pact with the bloodline of Arathor for King Thoradin's help in the Troll Wars, sent aid to the Alliance of Lordaeron in the Second War due to Sir Anduin Lothar's status as the last of the Arathi. After the orcs, riding enslaved red dragons, burned the borderlands of Quel'Thalas, the elves put their full support behind the Alliance. The high elves were the most reluctant and fair-weather members of the Alliance, and seceded from it soon after the war was done.

About fourteen years later, the Scourge destroyed Quel'Thalas and the survivors renamed themselves blood elves (Sin'dorei or "children of the blood"). A short while later, the blood elves under Kael'thas joined Illidan Stormrage who offered them salvation. Close to five years after joining Illidan, they would join the Horde for support against the Scourge and fight their own prince for allying with the Burning Legion.

This said, a small number of high elves remain. Their central organization is the Silver Covenant, a branch of Dalaran in opposition to their sin'dorei counterparts. Per Word of God, most of the remaining high elves stuck with the Alliance after their kingdom officially left it after the Second War, and did not return after the Third.

While these remaining high elves are not playable in World of Warcraft, they still remain active within the Alliance. Recent developments during and after the Third Legion Invasion has led to the formation of a branch of blood elves exiled from Silvermoon City for dabbling in Void arts, with some high elven members joining as well, known as the Void Elves (Ren'dorei in Thalassian), under the leadership of Alleria Windrunner who is the first elf to master the Void during the events in Argus. These elves are a playable allied race for the Alliance faction since the Battle for Azeroth expansion.

Tropes only applicable to high elves:

Tropes only applicable to void elves:

"Outrageous! They dare to invade our home? They dare! We shall teach them to trespass here! Gather our warriors. Summon our rangers. We will attack the trolls and drive them from our forest so sternly they shall never dare encroach again."

The long-lived king of Quel'Thalas, who ruled it even before the Troll Wars. He perished during the Third War, in a personal duel against Arthas Menethil. 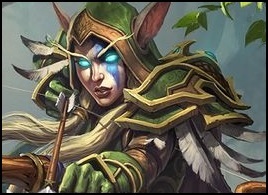 So that's where she has been all along!

A high elven ranger captain of Quel'thalas, eldest of the Windrunner sisters, and an early volunteer to help the Alliance against the Horde in the Second War, even before the high elves formally chose to join the war. During the war the elven homeland was almost burned to the ground by the orcs and her younger brother killed, leading her to become obsessed with revenge and fixated on exterminating the orcs. She relished the chance to join the Alliance Expedition to Draenor and fight the orcs further, and once there, with the aid of Turalyon and Khadgar, eventually gave up on her genocidal quest. While she doesn't appear in The Burning Crusade, her son with Turalyon, Arator the Redeemer, does. Alleria returns in Legion, having been fighting the Legion on Argus with Turalyon and the Army of the Light, and afterwards returns to the Alliance, rescuing and recruiting Umbric's sect of Void users. 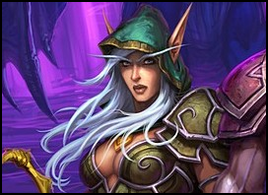 Vereesa is a high elf ranger and the youngest of the Windrunner sisters. Like her sisters, she fought alongside the Alliance against the Horde during the Second War. In current times, she is the leader of the high elf remnants in the Alliance and Ranger General of the Silver Covenant.

Enraged that Varian negotiated a peace treaty with her husband's killers, Vereesa plots to poison Garrosh Hellscream when it becomes clear that he will face life imprisonment rather than execution, as well as defect from the Alliance in favor of the Forsaken, both to reconnect with her sister Sylvanas, and to be able to set foot in Quel'thalas once again. However, at the last moment, she has a change of heart and decides to remain with the Alliance, even confessing the poisoning to Anduin in order to give him a chance to save Garrosh.

In Legion, despite still deeply distrusting the Horde, she agrees to work alongside them in order to combat the Burning Legion, becoming one of the main leaders of the Unseen Path, a Class Hall composed of Hunters from both the Alliance and the Horde. She later assists Tyrande Whisperwind in leading the Alliance contributions to the Nightfallen in Suramar, and serves as one of the main Alliance representatives aboard the Vindicaar during the Argus Campaign.

Captain Auric Sunchaser is leader of the Allerian Stronghold, and later the High Elf Representative in Quel'Danas. 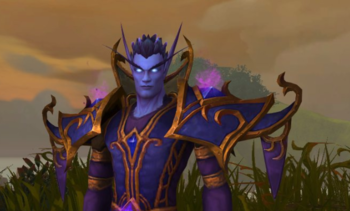 ♫ Arise, ye victims of oppression; let the goblins fear your might! ♫
“We fight for the Alliance because we believe in its values. And one day I pray we will bring all of Silvermoon back into the fold.”

Umbric was a blood elf magister exiled for his Void research. Before the outbreak of the world war in Battle of Azeroth, Alleria Windrunner was searching for him in order to gain the exiles' allegiance and knowledge, and found him doing his research in Telogrus Rift, being nearly corrupted by the void ethereals, but ultimately mastering the power. He is one of the first void elves.