Nearly 25,000 years ago, the Eredar of Argus lived in peace. That didn't last. Their mastery of magic attracted the attention of the Burning Legion and its leader, Sargeras, led the Eredar into corruption. Two of the Eredar's three leaders, Kil'jaeden and Archimonde, fell into the corruption of fel magic. The third leader, Velen, prophesied what was to come and led those who would listen away from demonic corruption.

The uncorrupted Eredar were hunted by their kinsmen until the Naaru K'ure, an alien being of pure Light, came to rescue them. From then on, the uncorrupted Eredar were known as the "exiled ones" or "draenei" and fled Legion pursuit. After they finally seemed to lose the Legion, a weakened K'ure, unable to power its vessel, crashed into a planet and stranded the draenei. The draenei named the planet Draenor and were on relatively good terms with the native orcs.

However, the Legion would turn the orcs into a Horde and raze draenei civilization. Some of them mutated into "broken" and "lost ones" from a demonic taint that robbed them of their connection to the Light. New visitors, Illidan Stormrage, Lady Vashj, and Kael'thas Sunstrider, appeared on Outland years later, the Broken Akama and his Ashetongue Deathsworn joining them. The recovering survivors hid away for years until the Naaru came with a new vessel, Tempest Keep.

When Kael'thas came to the Netherstorm, he stormed Velen's refuge at Tempest Keep and stole its Naaru, M'uru, for himself. Velen and his followers sieged the keep to retake the Exodar wing and escape Draenor. They were successful but blood elf saboteurs caused them to crash on Azeroth. After this, the draenei joined forces with the Alliance to fight in Outland... and, arguably, haven't done much since then. That is, until a temporal disturbance caused the Draenor of old to re-emerge... 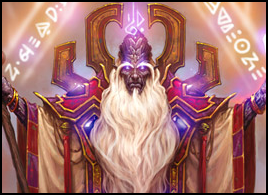 Crystal Demon Pope
"Not all who wander are lost."

The only one of the three Eredar lords approached by Sargeras to reject his offer of power. He has a gift of prophecy that allowed him to see exactly where that path would lead, and with the help of the Naaru, beings of pure Light, he led the like-minded draenei (Eredun for "exiles") into becoming interdimensional refugees.

During the Pandaria campaign, Velen is called upon to tend to Anduin when the latter is critically wounded by Garrosh. Later, during Garrosh's trial, Tyrande, the prosecutor, calls upon Velen in an attempt to discredit the Horde by having him tell the court of his people's near genocide at the Orcs' hands. While Velen does not deny that his people suffered terribly at the Orcs' hands, he reaffirmed that he does not believe the entirety of the Horde nor the Orcs should bear the full blame for the massacre. During the Legion's devastating Third Invasion, he became one of the main leaders alongside Khadgar, Maiev, and Illidan of the united Horde and Alliance forces arrayed against the Legion, spearheading the Argus Campaign that sought to end the Burning Crusade once and for all.
Nobundo 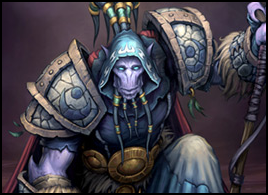 "Everything that is, is alive."

Once a vindicator, Nobundo was one of the draenei that fought the orcs at Shattrath. He and a few others survived, but were terribly disfigured and lost their ability to contact the Light due to a mysterious demonic curse. After being exiled for fear of their condition being contagious, Nobundo was contacted by the elements of Draenor and became the first draenei Shaman. He and the other "Broken" were eventually accepted back into draenei society, and Nobundo began to instruct others in shamanism.

A younger, unbroken Nobundo is a minor character in Warlords of Draenor, first helping to defend Auchindoun from the Burning Legion and then later aiding the Furies of Nagrand to find Gordawg and battle Cho'gall at Oshu'gun.
Maraad 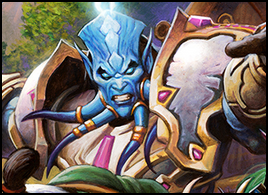 Don't get mad, get Maraad.
"I would avenge the countless draenei who had perished!"

A wandering warrior of faith, Maraad is a pillar of draenei society and one of their most notable Vindicators. His sister was captured and raped by orcs as part of Gul'dan's experiments, giving birth to his niece Garona before dying. Maraad was also present at the destruction of Shattrath City, where he was ordered to escort a party of refugees to safety. Partway through he fought an orc and told the refugees to keep going, that they'd be safe — only to find them all killed when he returned from battle. Prior to Wrath of the Lich King he helped out his niece and her son Med'an against Cho'gall and the Twilight's hammer. He subsequently served in the war in Northrend and returned to instruct others in the ways of the Light. He plays a major role in Warlords of Draenor as he travels back in time to the alternate universe Draenor.
Yrel 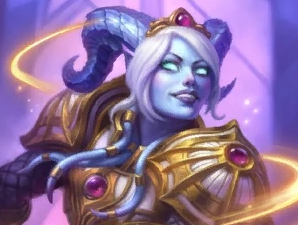 A draenei paladin from the alternate timeline Draenor in Warlords of Draenor. Yrel starts as a naïve priestess on Draenor, but when the Iron Horde begins its path of conquest, she must stand up and become a hero for the draenei and the Alliance.

During the events of Battle for Azeroth, several decades have passed in the alternate Draenor with the Draenei and Mag'har joining together to oust the Legion from the planet. Without an enemy to focus on, the Draenei led by the Naaru turned into an extremist cult bent on converting everyone on Draenor whether they liked it or not, intending to use them as a launching pad to spread 'order' throughout the cosmos.
Exarch Maladaar

"I would forfeit my own soul to protect my people."

One of the five Exarchs and the Speaker for the Dead, Maladaar is a prominent figure in Warlords of Draenor. He leads the Auchenai, a group of soulpriests who watch over the holy sanctuary of Auchindoun.