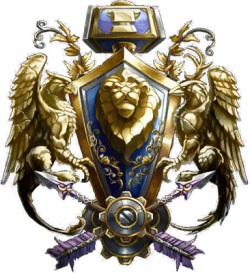 Crest of the Alliance
Also known as the Alliance of Lordaeron or the Grand Alliance, the Alliance was a combined front against the invading orcish Horde, involving the peoples of the seven human kingdoms, the dwarves and gnomes of Khaz Modan, and the high elven kingdom of Quel'Thalas. The Alliance successfully drove the orcish Horde back through the Dark Portal in the Second War but split up by the time the Third War rolled around due to infighting and political turmoil among other larger problems, leaving several member factions broken or completely destroyed.

In World of Warcraft, the Alliance initially consists of Stormwind, Theramore, Ironforgenote Encompassing both the Bronzebeard and Wildhammer clans, Gnomeregan and Darnassus, as well as the remnants of Stromgarde and Lordaeron and the exiled high elves of Quel'Thalas. It is later on in The Burning Crusade joined by the draenei of the Exodarnote  As well as some of the Broken of Outland and in Cataclysm by the now worgen kingdom of Gilneas. Also during Cataclysm, a faction of the Dark Iron clan of dwarves returns to Ironforge. In Mists of Pandaria, the pandaren who follow the path of the Tushui join the Alliance, and during the course of the expansion Dalaran formally rejoins as well. In Battle for Azeroth, the Alliance seeks new allies in their war against the Horde, including the Lightforged Draenei of the Army of Light, the Void Elves, and the naval nation of Kul Tiras. Sometime around the end of the Fourth War, the Mechagnomes of Mechagon also join the Alliance. Other races sworn to the Alliance banner include the Frostborn dwarves of Northrend and the Pearlfin Jinyu of Pandaria. In Dragonflight, the dracthyr of the Obsidian Warders join the Alliance out of convenience to deal with the threat of Raszageth.