Characters / Warcraft The Horde Other

The Horde is more than just its playable races. Its influence spreads all over Azeroth, and the Horde has recruited many people along the way.

Ogres as a whole

The ancient enemies of the orcs on Draenor, the two races put aside their differences with the rise of the Horde.

"I will never call Brackenwall Village my home. To do so is to give up hope of reclaiming our rightful lands"

An intelligent Two-headed Ogre of the Stonemaul clan that lives in Brackenwall Village. He resents that the Overlord of the Clan, Mok'Morokk, hasn't done anything to retake the lands the clan was driven away from. Draz'Zilb sends out adventurers to figure out which Dragonflight drove his clan out of their old village.

Taunka as a whole
The taunka, ancient relatives of the tauren, were thought to be lost until re-discovered by Garrosh Hellscream and his orc forces upon their arrival to Northrend. Like their ancestral relations the tauren, the taunka are a hardy people who have given their allegiance to the Horde. They, like their distant cousins the tauren, are involved with the spirits of the land, though after living for so long in such a harsh environment as Northrend they tend to bully the elements rather than ask them to keep their region inhabitable. Although they appear similar to the tauren, they resemble bison more than cattle.

This tenacious, stoic race knows all too well the rigors of living in the harsh and often deadly wastes of Northrend. Over time, the taunka — whom many believe to be ancestral cousins of the tauren — have adapted, but only by forcing the land and the elements to yield to their will. The taunka's relationship with nature, unlike that of their tauren brethren, has been one of constant struggle and grim perseverance.

Although the taunka may seem dour or even cold to outsiders, those who come to know them will soon recognize an embattled race of survivors characterized by colossal hearts and unshakable resolve. 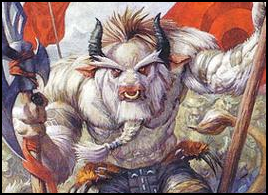 "From this moment, until the end of days I live and die — For the Horde!"
Class: Warrior

Roanauk is the Chieftain of the Icemist tribe of taunka and the High Chieftain of the united taunka tribes. He is being imprisoned in the ruins of Icemist Village by the Scourge. The player aids him in the quest chain Strength of Icemist, where the player frees him. He is then found with other Taunka'le Refugees where the player offically inducts him into the Horde as the leader of the Horde taunka. 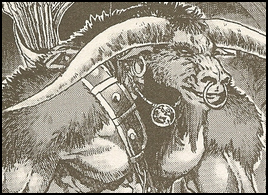 "Unlike you, Shaman, I will not slay one who cannot even move to defend himself... Though I am sorely tempted."

Trag Highmountain is a tauren from the Highmountain tribe, a tribe known for its powerful and tenacious warriors. Trag was friends with Baron Valimar Mordis, a human who later turned into a Forsaken. The two worked together to fight the Scourge and obtain an artifact known as the Orb of Ner'zhul, which allowed the user to raise powerful undead creatures, an artifact Valimar intended to use. When he was willing to sacrifice an innocent, however, Trag was not amused. He rescued the innocent Anveena, but Valimar defeated him in battle. When Trag awoke, he found Valimar raising dead with the Orb, and so he snatched the Orb, and shattered it in his palms. This caused the undead Valimar raised to collapse, including a frost wyrm hovering overhead. The falling wyrm killed them both.

The energies of the Orb, however, were not done with Trag. He found that the Orb has raised him, too, into undeath. No longer one of the living, he tried to return to his tribe, but found himself secretly betrayed when they tricked him and tried to burn him. He defeated his tribe singlehandedly and left, the whispers of the Lich King calling to him...

He eventually did travel to Northrend, becoming one of the Lich King's Death Knights. However, he was able to resist Arthas' control and tried to confront him, but was easily defeated. He was thrown from the citadel and adopted by the taunka, whom he had befriended earlier in his travels through Northrend towards the Lich King.

Goblins as a whole

During the events of Warcraft II, the Steamwheedle Cartel, in the pursuit of riches, threw in their lot with the Horde. After the War was over, they realized there was much more money in working with both the Horde and Alliance, and so in World of Warcraft, offered their services to both. They still lean towards the Horde, but for the sake of money, maintain neutrality.

The Steamwheedle Cartel is one of the largest and most successful of the Goblin Cartels in Undermine. It is a neutral organization that controls several cities and towns around the world, and has allied themselves with a number of other groups such as the Blackwater Raiders in Booty Bay. The Steamwheedle Cartel has made a great deal of profit from maintaining neutrality in the conflict between the Horde and the Alliance. Their services are always available to the highest bidder, employing anyone regardless of their affiliation if they can produce results.

Revantusk Tribe as a whole

Never one of the larger tribes in the Amani empire, the Revantusk tribe was nearly wiped out by the Troll Wars. Reluctantly, the trolls yielded to practicality and moved a safe distance away from the elven invaders. Like other forest trolls, the Revantusks swore that one day they would have their revenge.

As leader of all the forest trolls at the time, Zul'jin eventually accepted Doomhammer's offer. A few tribes of forest trolls joined their new allies on the battlefield. Shortly thereafter, the Horde burned down the borderlands of Quel'Thalas and slaughtered many high elf civilians. Furious at this wanton destruction of life, the elves subsequently committed all their resources to the war, which the Alliance ultimately won.

Several additional battles later, most of the vanquished orcs on Azeroth were rounded up and placed in internment camps. In the war's disastrous aftermath, the Horde was shattered, and many forest trolls deserted their former orc allies without a moment's hesitation. The Revantusks had little choice other than to flee as well, for their numbers were far too few to liberate the captive orcs, particularly when the orcs themselves seemed uninterested in freedom. Because they continued to feel some loyalty toward the Horde, the Revantusks were the target of many attacks from other forest trolls. Eventually the Revantusk tribe relocated to the coast of the Hinterlands, where they hoped to avoid further notice.

Then the courageous orc Thrall began reassembling a new Horde. He resolved that his people would return to their shamanistic traditions and establish a nation of their own. Word of the revitalized Horde and its noble goals soon reached the Revantusk trolls, who were still dwelling in Lordaeron. The news stirred the trolls' interest, and the tribe immediately dispatched its speediest runners to make contact with the orcs.

Thrall was wary of the trolls at first, but he came to see that the Revantusk trolls were unique among forest trolls in a fundamental way. The Revantusk tribe had never had much in the way of the fighters or resources, and so it had instead decided to specialize in the trickier art of negotiation. By the time they spoke with Thrall, the Revantusks had acquired a reputation for trustworthiness that was well deserved.

The trolls were impressed by Thrall and his dream. Even so, they remembered the recklessness and corruption of the Old Horde. Thus, the Revantusks declined to rejoin the Horde, but they did agree to a pact of friendship and mutual assistance. 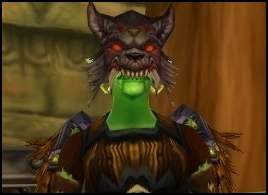 "Every victory of the Revantusk is a victory for the Horde!"
Class: Primal

Primal Torntusk personally fought in the Second War and fled to the to the coast of the Hinterlands after the war and helped established Revantusk Village. Sometime before joining the New Horde her mate Elder Torntusk was captured by the the Vilebranch tribe and held at Jintha'Alor.

With her mate free and now in charge of the village, Primal Torntusk has gone to lead their warriors against the wicked Vilebranch tribe. She's found at a camp she captured near the entrance to the city.

Unshackled as a whole
A group made up of various former slaves of the Naga founded by Neri. They crossed paths with the horde when the horde crashed into Nazjatar. They are now working together to take down the Naga and free their fellow slaves.
Neri Sharpfin
"It's hard to image what we'll do once we don't have to fight to survive. I look forward to figuring that out."

A female gilgoblins who is the leader and founder of the Unshackled. Neri Sharpfin was a slave to the Naga who tried multiple times to escape her masters, she eventually escaped along with her fellow prisoners and vowed to free all the slaves from the Naga. When the horde comes to Nazjatar she rescued the adventures and bring them to her home Newhome. She now works with the horde to stop the Naga and save the slave still held by them.