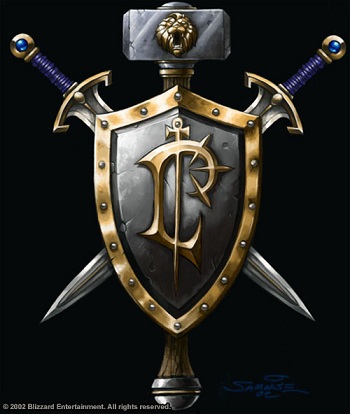 Covering most of the northern regions of the Eastern Kingdoms, Lordaeron was the largest of the human kingdoms. By the time of the orcs' arrival on Azeroth, it was ruled by King Terenas Menethil II. When refugees from Stormwind arrived in Lordaeron after the First War, Terenas called the other human kingdoms together and formed the Alliance of Lordaeron. Lordaeron was also the birthplace of the Order of the Silver Hand, founded in preparation for the coming war with the orcs.

Unfortunately, fourteen years after victory in the Second War, the plague of undeath would ravage the kingdom of Lordaeron. Despite efforts to combat the Undead Scourge, Terenas' heir Prince Arthas eventually fell to darkness and slew his own father, conquering Lordaeron for the Scourge.

While Arthas was eventually ousted from Lordaeron, a large majority of its people are now undead, some of which became the Forsaken. However, the living remnants of Lordaeron among the Alliance, the Scarlet Crusade and the Argent Crusade, still seek to restore the once great kingdom.

The forces of Lordaeron were the playable human/Alliance faction in Warcraft III (minus the Blood Elves' campaign from The Frozen Throne). Stormwind took over this role for the basic humans in World of Warcraft. 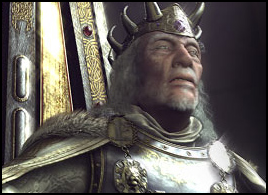 A king that doesn't kick ass for once
"I will not institute quarantine without proof of your claims, ambassador! The people of Lordaeron have suffered enough without becoming prisoners in their own lands."

The king of Lordaeron and one of the primary founders of the Alliance. When Lothar brought the refugees of Stormwind with him north to Lordaeron, Terenas immediately called for all of the neighbouring kings to unite as the Alliance. After the Second War had been won, Terenas took over as its leader for years to follow. During the Third War, he ignored Medivh's prophecy of the Burning Legion's coming, dismissing him as "rambling prophet". As a plague had presumably struck the northern parts of Lordaeron, he sent his son, Prince Arthas, to investigate, who found out that an undead army, the Scourge, was behind it all. After Arthas returned from Northrend, he was killed immediately by the now corrupted Arthas, who promptly destroyed the lands he had ruled for over 50 years. Alas, he did not get to taste the swift release of death. His soul was bound within Frostmourne, alongside many others.

In Wrath of the Lich King, Terenas provides the ironic narration of the expansion's opening. He also plays a major part as a soul in the fall of the Lich King, where he taunts the Lich King that his end comes and in the final fight, he not only helps players get freed from Frostmourne, he also ressurects the entire raid after Tirion destroys Frostmourne.

See his sheet on the Scourge page.

See her sheet on the The Forsaken page.

Order of the Silver Hand

"At times I have been a leader of a church, a mindless minion of the Scourge, and a commander in a secret war. But I have always been a priest first."

Head of the Church of the Holy Light prior to Benedictus and co-founder of the Order of the Silver Hand. Having recognised how unsuitable priests were for warfare after the destruction of Stormwind, he founded the Order of the Silver Hand with his apprentice Uther, whom he anointed as the first paladin. He died sometime between the Second and Third Wars, the cause unknown. His grave can be found at Faol's Rest, outside of the Scarlet Monastery.

He is revealed in Legion to have been raised as an undead by the Scourge during the Third War, but managed to break free of their control. He has remained hidden since then, but reemerges to form a united front of priests of all faiths against the Burning Legion.

See his sheet on the Stormwind page. 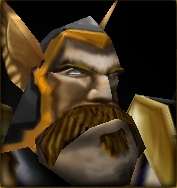 Lord of the Mustache
"The only good non-human is a dead non-human."

Grand Marshal Othmar Garithos was a human supremacist and noted racist with a fierce hatred for all non-humans, and a special hatred reserved for elves in particular. When Lordaeron fell during the Third War, leadership of the broken remnants of Lordaeron's army fell upon his shoulders. He managed to successfully defend southern Lordaeron and take back Dalaran from the Scourge, but at the same time cost the Alliance the aid of the blood elves when he tried to execute Kael'thas and his men. He was killed by Varimathras on orders from Sylvanas, after having previously allied with each other to take back Lordaeron's capital city. 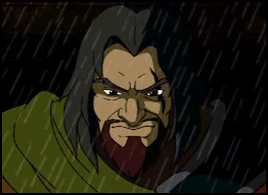 Master of Durnholde Keep and head of the orcish internment camp system. Found the orphaned Thrall after the murder of his parents and raised him, intending to make him into a general that would lead the orcs into taking over Lordaeron for Blackmoore. Having mistreated the orc as he raised him, Thrall ran away, eventually finding his way back to the clan he came from. When Thrall took control of the Horde and freed the orcs from the internment camps, he laid siege to Durnholde, eventually killing Blackmoore.

Also known as just the Captain, Falric was one of the officers serving under Prince Arthas' command during the Scourge. He loyally followed his prince into the frozen wastes of Northrend, but after Arthas turned he was slain and raised as a death knight. He since followed Arthas as he slew his own father and laid waste to Lordaeron. 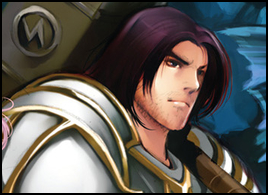 Once a paladin in service to Prince Arthas Menethil, Jorad Mace is haunted by his failure to stop his prince from destroying Lordaeron, which caused him to lose his connection to Light. Was on the verge of death following the destruction of Lordaeron, but was saved by the mysterious Borel, also known as the dragon Krasus. Waiting in Tarren Mill, he encounters the blue dragons Kalecgos and Tyrygosa and the mysterious young girl Anveena. He aids them in their search for Borel and the Sunwell, eventually culminating in the discovery that Anveena was the Sunwell in human form all along.