A character subpage for the WarCraft universe, including World of Warcraft. For the main character page, see here. 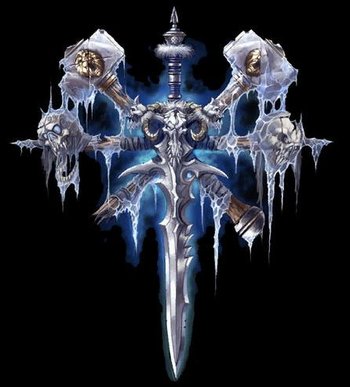 The Scourge is an army of undead created as a vanguard for the invasion planned by the Burning Legion, with the goal of succeeding where the Horde once failed. The Scourge's mission was to spread terror and destruction across the world in anticipation of the Legion's inevitable invasion. The Lich King, who ruled the icy realm of Northrend from his Frozen Throne, created the terrible Plague of Undeath, which he sent southward into human lands. As the plague encroached on the southlands, countless humans fell prey to Ner'zhul's mental control and life-draining sickness every day, swelling the ranks of the already-considerable Scourge.However, following the defeat of the Burning Legion and the decimation of their branch of the Scourge, Ner'zhul decided it was time to make his own power play, bringing Arthas north to free him from his icy prison, and declaring the Scourge a host unto itself apart from the Legion.

That said, their rule was not absolute, as the Horde, the Alliance, the Red Dragonflight, the Argent Crusade, and even traitors from within their own ranks (The Forsaken and Knights of the Ebon Blade) all rose to oppose the Lich King's will. Eventually, Arthas was defeated after the factions and their allies united to storm Northrend and lay siege to his fortress within Icecrown Citadel, battling their way through his most powerful minions in order to defeat him once and for all. However, as Arthas lay dying in the snow, the ghost of his father, Terenas Menethil, issued a dire warning:

As fortune would have it, a voluntary candidate presented itself in the form of the horrifically burned and tortured Bolvar Fordragon, whose broken body had been taken by Arthas from the failed siege of the Wrathgate in order to shape into a death knight. Now, with the world of the living no longer able to comfort him, Bolvar serves as the incumbent Lich King: the eternal jailer of the damned. It's Bolvar's will alone that prevents the Scourge from rampaging across Azeroth, and as a result, they've mostly remained dormant to this day, content to remain within their territory on the unforgiving northern continent. In recent years, however, Bolvar has grown more active, even participating in the defense of Azeroth during the Third Invasion of the Burning Legion by entering into an alliance with the somewhat reluctant Knights of the Ebon Blade, helping them obtain their artifact weapons as well as form a new Four Horsemen. However, there are also worrying signs that Bolvar's noble heart may be succumbing to the dark powers of the Helm of Domination... 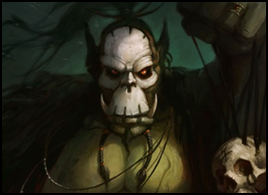 SKULLS FOR THE SKULL THRONE! ...oh wait, this is Warcraft...
"The other orcs are lost. They have served their purpose. All that we gain will be ours alone. I am the Horde, and I will survive. Choose me, or choose death."

Once the elder shaman of the orcs, Ner'zhul was the first among his kind to be contacted by Kil'jaeden of the Burning Legion. After being fooled for a while, he managed to see the truth and tried to undo the corruption he'd started. Unfortunately for him, his apprentice Gul'dan took over his position and role willingly. Years later, Ner'zhul led the nigh defeated orcs as warchief in the aftermath (expansion pack) of the Second War. After creating portals to other worlds, seeking to conquer them, he escaped the Alliance through one only to be caught by Kil'jaeden.

The demon lord ripped Ner'zhul to pieces, yet preventing him from dying. The orc eventually vowed to help the Legion create another army to attack Azeroth in exchange for the promise of a new, healthy body. Ner'zhul was turned into the Lich King, beginning the existence of the Scourge.

In Warlords of Draenor, the alternate timeline Ner'zhul manages to avoid his grisly fate and apparently return to shamanism. Forced to join the Iron Horde or risk his peoples' deaths, Ner'zhul has called on the ancient and forbidden powers of the Dark Star, an old deity to the Shadowmoon clan that suspiciously appeared at the same time as the draenei's crash landing centuries ago. 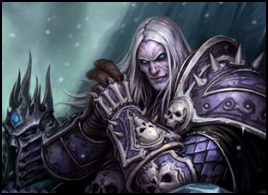 The son of King Terenas Menethil, Arthas started out as The Wise Prince, an idealistic, chivalrous hero of Lordaeron, and was also Jaina's Proudmoore's lover. Unfortunately, the events of the Third War drove him to abandon his idealistic stance in favor of purging the Plague of Undeath sent by Ner'zhul (the original Lich King). Eventually, the trail set up by the Dreadlord Mal'ganis led him to Northrend and the sword Frostmourne, which consumed his soul and turned him into a Death Knight. He went on to slaughter his people and his father, the king and helped summon Archimonde in a failed attempt (influenced in part by Nerzhul's scheming) to claim the power of the World Tree. Shortly thereafter, Ner'zhul called him back to Northrend to defend against the assault of Illidan Stormrage. Arthas defeated Illidan, then rose to the weakened Frozen Throne, merging with Ner'zhul and becoming the Lich King. Arthas then consumed Ner'zhul's spirit and eradicated Ner'zhul's mind some time after their merge but before Wrath of the Lich King, establishing him as the sole leader of the Scourge.

Bolvar Fordragon
For tropes on the third Lich King, see Warcraft Knights Of The Ebon Blade. 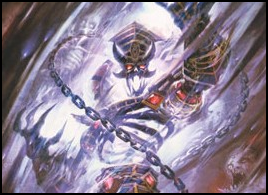 "I am Kel'Thuzad, and I've come to deliver a warning. Leave well enough alone. Your curiosity will be the death of you."

A powerful necromancer in life, Kel'Thuzad was resurrected in the energies of the Sunwell by Arthas shortly after the latter's Face–Heel Turn. With the help of the Scourge forces, he was able to summon Archimonde into Azeroth via portal magic; the Eredar's ensuing rampage destroyed the city of Dalaran and culminated in the loss of the World Tree. Despite the defeat of the Burning Legion (and by proxy, the Scourge), Kel'Thuzad was not killed; rather, he accompanied Arthas on his journey to Northrend, where the prince eventually became the Lich King and appointed Kel'Thuzad as his right hand lich. He ruled the necropolis of Naxxramas, which terrorized both the Plaguelands and Northrend, though he felt defeat at the hands of adventurers. Yet, his phylactery was never found during his fall, implying he may still be around... 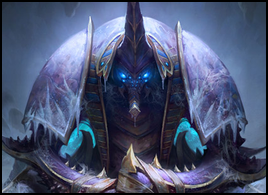 "The Scourge will devour all!"

Anub'Arak is the former king of Azjol-Nerub, who was killed and raised by the Scourge. The big crypt lord is now called a "Traitor King" by the surviving Nerubians, who wish to see him destroyed. He met up with Arthas on Northrend, who, alone and severely weakened, gladly accepted Anub'Arak's help. 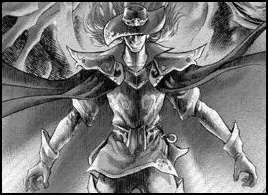 Once an esteemed magister, Dar'Khan Drathir would become one of Quel'Thalas' greatest traitors. His limitless ambition, combined with his egotistical mindset, made him an easy pawn for the forces of the Lich King. Empowered by the treacherous Prince Arthas himself, Dar'Khan opened the way for the Scourge to enter Quel'Thalas and ravage the land in their march to the Sunwell.

Though he was killed at some point after the fall of Quel'Thalas, Dar'Khan has been resurrected by the Lich King and now resides at the fortress of Deatholme in the southern Ghostlands, where he commands the Scourge in Quel'Thalas. 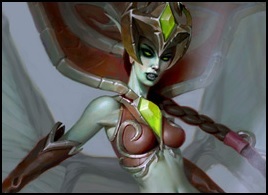 Formerly a High Elf warrior who survived the battle of Silvermoon, now an undead Blood Elf and the leader of the San'layn. She was a warrior of Quel'thalas and part of Kael's forces that fought to destroy the Frozen Throne at Icecrown. After Illidan's defeat, she was one of the survivors hunted down personally by the Lich King. Despite her efforts, Lana'thel was defeated and raised as an undead. The Lich King made her Blood-Queen Lana'thel, leader of the San'layn and put her in charge of overseeing Scourge operations across Azeroth. 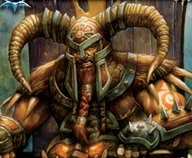 Ymiron is the vrykul king of Northrend. When the vrykul children started being born as smaller and weaker, Ymiron saw it as a sign that they had been abandoned by the titans and their watchers, declaring that the vrykul would now worship him as a god. He also ordered all of the "deformed" children to be killed, but their parents instead helped them flee south, where they would eventually become humans. For unknown reasons, the vrykul later went into a state of deep slumber for thousands of years.
When the Lich King arrived to take over Northrend, he awakened Ymiron and his slumbering people, who turned towards worshipping him as their new Death God. Ymiron proved himself to the Lich King and was turned undead, but was killed by adventurers in Utgarde Pinnacle. As a result of denouncing the titan keepers and his dark pact with the Lich King, he was denied entry into the Halls of Valor and instead condemned to Helheim. In Legion he is fought once again by players in the Maw of Souls dungeon. Warrior players who beat him forcibly recruit him as an unwilling champion for their order hall. 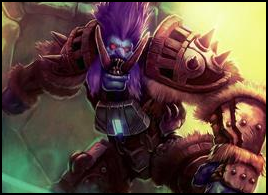 An ice troll encountered by the players, having been captured by the companions of Budd Nedreck. He makes a deal with the player that is supposed to ensure that Drak'tharon Keep remains unbreached and Zul'Drak safe from the Scourge. In reality, he tricks the player into lowering Drak'tharon Keep's defenses, allowing the Scourge to swarm over it. He is subsequently placed in charge of subjugating the rest of Zul'Drak for the Scourge and tries to forcibly convert the player to help in this. The player and the Knights of the Ebon Blade exploit this to infiltrate his forces and sabotage his plans, culminating in his death at the hands of the Lich King himself. 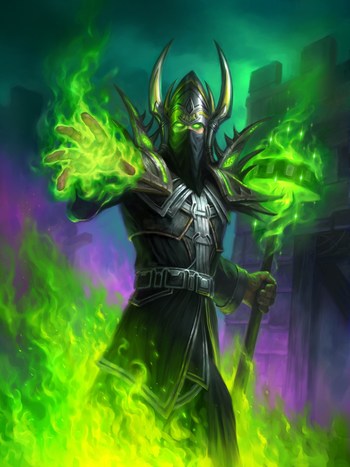 Archmage Arugal is a former mage of Dalaran who lived within the ruins of Shadowfang Keep and was later raised from the dead. He is most notorious for having unleashed the worgen once more unto the world by freeing them from the Emerald Dream.

Originally a respected patriot of Gilneas and a royal archmage, Arugal eventually became a member of the Kirin Tor of Dalaran. However, after the Scourge destroyed Dalaran and most of its populace, he returned to Gilneas. When the Scourge reached the outskirts of Gilneas, Arugal was called by King Genn Greymane to help him find a way to protect his kingdom. Arugal told him about the worgen, a mysterious race he had learned about, which could be summoned to help them. He warned Genn about the worgen's strength and ferocity, but the king decided to enlist their help. Using Ur's research, Arugal summoned worgen to attack the undead that attempted to pass the wall. Though they were successful in killing the Scourge, they later turned their rage against the Gilnean soldiers, turning some of them into worgen. This started spreading the worgen curse all through Gilneas.

Some worgen later sieged the keep of the noble Baron Silverlaine. Situated above the tiny hamlet of Pyrewood Village, the keep quickly fell into shadow and ruin. Driven mad with guilt, Arugal adopted the worgen as his children and retreated to the newly dubbed 'Shadowfang Keep'. Although slain and beheaded, in Wrath of the Lich King he is resurrected as the Shade of Arugal by Darkfallen Princes, where he serves as the leader of a new Wolf Cult in Grizzly Hills.

A lich in the Scourge army. Unlike the rest of the liches, loyal to Ner'zhul, Winterchill is fanatically loyal to the Burning Legion and participates in the Battle of Mount Hyjal.