The Prophet Zul: Vol'jin! Of the Darkspear! You would turn your back on your own people?
Vol'jin: The Horde is my people. If it be war you bring, then I stand against you. 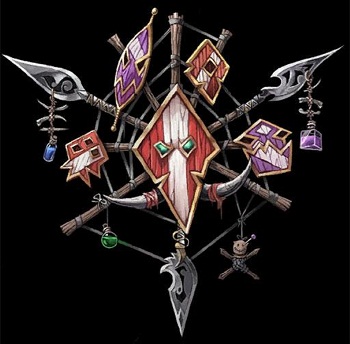 The Icon of Shadows

The savage trolls of Azeroth are infamous for their cruelty, dark mysticism, and seething hatred for all other races. Yet one exception among the trolls is the Darkspear tribe and its cunning leader, Vol’jin. Plagued by a history of subservience and exile, this proud tribe was on the brink of extinction when Warchief Thrall and his mighty Horde forces were driven to the trolls’ remote island home in the South Seas during a violent storm.

Led at that time by Vol’jin’s wise father, Sen’jin, the Darkspears abandoned their prejudices and worked together with Thrall’s orcs to defeat a group of humans encroaching on the jungle isle. With unparalleled bravery, the trolls fought side by side with the Horde to secure victory, but tragedy befell the Darkspears soon afterward. Intent on appeasing a mysterious sea witch, a frenzied band of murlocs captured the isle’s defenders. Although a number of the imprisoned orcs and trolls managed to escape, the noble Sen’jin was slain by his captors.

In Sen’jin’s honor, Thrall welcomed the Darkspears into the Horde and offered them sanctuary in a new kingdom that he planned to create across the Great Sea. The trolls accepted Thrall’s offer, and Vol’jin eventually led his tribe to the vibrant jungles of the Echo Isles located just off the rugged coastline of Durotar.

Chieftain of the Darkspear, (former) Warchief 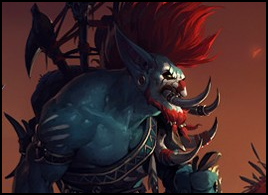 "You, Taran Zhu, have your family to care for here. So does Chen. Tyrathan gonna return to his family. The Horde be my family. Just as Tyrathan can't let his family believe he be dead, nor can I do that to the Horde. They deserve peace, too, and my accepting it here would deny it to them. ... Can or cannot doesn't matter. Shadow Hunter or troll doesn't matter. Vol'jin Darkspear not gonna do it. That be not who I am. Time come that I be reminding my enemies of that fact, and making them pay for the evil they've wrought."

Chieftain of the Darkspear Tribe of Trolls. He joined up with the Horde in Warcraft III (as seen in the demo of Reign of Chaos and The Frozen Throne expansion) after Thrall & co. saved his tribe from the wrath of a naga Sea Witch (later named Zar'jira) and her murloc minions. He took the role of leader after the death of his father Sen'jin at the hands of one of Zar'jira's worshippers. As a Shadow Hunter, Vol'jin was raised with savage training as a Headhunter, which led into more magical studies when he became older, and started communing with Loa and other ancestral spirits.

For most of WoW's life, he has played a minor role compared to other Horde leaders. In the story, he served as Thrall's most trusted adviser and agent, leading Orgrimmar in Thrall's stead if the latter were to leave the city, and giving the Warchief advice, in which case, Vol'jin excelled in both diplomacy and military tactics. Things, however, took a turn for the worse when Thrall named Garrosh Hellscream as his successor.

While Vol'jin, as well as the other advisers, attempted to reason with Garrosh, he was too impulsive, arrogant, and hot-blooded to listen to them. In a heated exchange, after Garrosh killed Cairne Bloodhoof in Mak'gora, Vol'jin left the city of Orgrimmar with a single promise — if Garrosh continued to lead the Horde down a dark path, Vol'jin would take it upon himself to end his reign swiftly and silently. This came to a head during Garrosh's Pandaria campaign, where Vol'jin approached the Warchief with a final warning; bringing war to Pandaria's shores wouldn't unite the conquered under the Horde's banner, but make them turn against Garrosh, lest they be ruled by a tyrant. Garrosh responded by having an assassin attempt to slay Vol'jin.

With a poisoned dagger plunged into his throat, Vol'jin wandered the wilds of Pandaria, with only his Trollish regeneration keeping him alive, until he came across an old friend in Chen Stormstout. Chen took him to the Shado-Pan where he could recover from his wounds. After an adventure at the side of Chen and the Shado-Pan, Vol'jin resolved to return to Durotar and begin a rebellion against Garrosh. He was successful, pulling almost the entire Horde to his side, with Orgrimmar being the final holdout.

During the Siege of Orgrimmar, Vol'jin had a choice. He could plunge deeper into Garrosh's underground fortress and slay him, as he promised. But Orgrimmar was being sacked, and people, both innocent and guilty, friendly and hostile, were dying as the Alliance looted the streets. Vol'jin resolved to leave Garrosh to Thrall and the nameless champions of the Horde and Alliance, so he could unite the Revolution with the defeated defenders of Orgrimmar, bring peace to the city up above, and end the chaotic bloodshed. He placed the safety of his city and his people over his personal feud with Garrosh Hellscream.

After Garrosh's fall, Vol'jin was unanimously named Warchief of the Horde. Sadly when the Burning Legion returned, Vol'jin was mortally wounded in battle at the Broke Shore. Before he passed on, he named Sylvanas as the future Warchief. 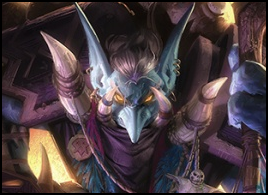 "I saw your arrival in a vision! Especially you... the Seer."

Chieftain of the Darkspear Tribe before his son. Sen'jin lived a relatively peaceful life until new troubles began. Humans from Kul Tiras came to the island and made a settlement, pushing the trolls further into the island. Meanwhile, the once-docile murlocs had become fevered, prodded by the dark Sea Witch that lived in the ocean, who they offered sacrifices to.

Then one night, Sen'jin received a vision and he sent his son Vol'jin to the First Home...

Sen'jin saw a young orc — a farseer, who would drive the humans away, and save his people, leading them from the island. That soon came true. As Sen'jin's visions reported, Thrall and his fleet were forced to moor on his island after the Maelstrom nearly destroyed his ships. Sen'jin approached the orcs, warning them of the humans nearby. Thrall promised to force the humans from his island. After defeating the humans's leader, an archmage, and forcing them into a retreat, they were suddenly attacked by murlocs who captured Sen'jin's trolls, the witch-doctor himself, Thrall, some of the orcs and the remaining humans.

Thrall managed to escape the prison and rescued many orcs and trolls, but a murloc high sorcerer took Sen'jin into the deepest part of the underground lair, where he brutally attacked him and sacrificed him to the Sea Witch just as Thrall arrived. Thrall battled through the murlocs and finally destroyed the murloc high sorcerer, but Sen'jin's wounds were deep, and he was dying. In his last breath, Sen'jin implored Thrall to take his people from the island and save them from destruction.

It was as Sen'jin wished. In his honor, Thrall ferried many Darkspear on his ships and took them to Kalimdor, as Vol'jin stayed behind to rally the disparate villages that Thrall could not reach. Sen'jin, now a blessed ancestors in the care of Bwonsamdi, continued to advise and assist his son from beyond the grave, offering sagely advice and wisdom. It was Sen'jin's dream that Trollkind would be led by Shadow Hunters, as they had been long ago, and he saw Vol'jin as the vessel for that dream. 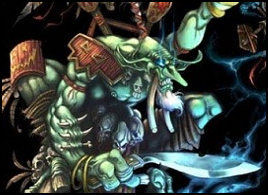 Champion of the Horde and the Darkspear Tribe, and described by former Warchief Thrall as the finest scout at the Horde's disposal, Rokhan was deployed to assist Rexxar in his quest across Durotar. In doing so, he and Rexxar became good friends, along with Chen Stormstout.

During Thrall's reign, Rokhan continued his service as an elite scout and spy; no one knows about any adventures he's been on, because he's good at his job. He later appeared in Northrend, commanding a contingent of Darkspear Dragon Hunters, hunting Frost Wyrms across the Dragonblight. Later, he serves as second-in-command of the player's Garrison in Draenor, and as the Darkspear leadership is in flux following Vol'jin's death, serves as a mouthpiece for his tribe. In Battle For Azeroth, he leads a covert mission into Stormwind to bust out the Zandalari aligned Princess Talanji and Prophet Zul, and later commands Horde troops alongside Eitrigg and Lady Liadrin in a warfront at Arathi.

A young Troll Shaman who fights at the Siege of Lordaeron. His father, named Hekazi, fought alongside High Overlord Saurfang during the Third War. Although he shows promise in the Shamanistic arts, this young troll is but a boy, and the Siege of Lordaeron is the first battle he's actually participated in.

Featured in the cinematic, ''Old Soldier''

When Saurfang is filled with despair and regret after the Burning of Teldrassil, a chance encounter with this young troll prevents him from committing suicide by combat. Zekhan sees Saurfang as a massive inspiration due to the stories told by his father, but the Alliance's approach has him nervous. When Saurfang abandons the ramparts, the young Shaman follows him. Saurfang insists he go back, but Zekhan refuses. He gives Saurfang a token that the Orc attempted to dispose of, reminding him that the Horde is all they have. This inspires Saurfang to return to the Horde.