"I never cover up the things I'm proud of. If the world was gonna split in half tomorrow, I’d buy the Dark Portal, slap a toll booth on it, and charge refugees the last of their pocket change, the rings off their fingers, a bite of their sandwiches, and a contractual obligation to build me a rocket palace in the skies of Nagrand. It's the goblin way! Supply and demand! Deal with it!"
— Trade Prince Jastor Gallywix, describing Goblin culture 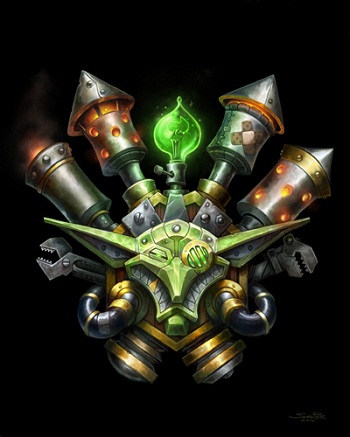 The goblins’ craftiness (coupled with undiminished natural greed) lifted the race to preeminence as masters of mercantilism. Prominent trade princes rose to power during the First War as the cleverest goblins took advantage of the strife. Great fortunes were amassed, and the Isle of Kezan became a hub for fleets of goblin trading ships. One of the more ambitious trade princes agreed to lend his cartel’s services to the Horde in the Second War. Following the Horde’s defeat, the goblins learned from that trade prince’s failed example, realizing that their profits could double if they weren’t stuck in a restrictive relationship. By the end of the Third War, goblins were providing weaponry, vehicles, and devious services to both the Horde and the Alliance. But the gravy train wouldn’t last forever... 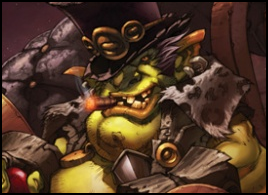 "Get outta my pool!"
"You might be wondering if I have any regrets. Sure, I exiled the love of my life within ten minutes of meeting her and arranged the later, thoroughly accidental death of my never-to-be father-in-law. Everyone I've ever known has tried to betray me. I am alone. HA! Right. Oh, no, my limitless wealth and power are all I have! How tragic! Send me sympathy money."

Trade Prince of the Bilgewater Cartel, Jastor Gallywix is the wealthiest, most powerful, meanest goblin on the isle of Kezan. Having backstabbed his way to the top of goblin society, he resided in a wealthy beachfront palace, where he spent the better part of his days extorting money from his subjects.

When Deathwing's emergence caused Mount Kajaro to erupt and rain fire on Kezan, Gallywix took the chance to pull the ultimate extortion: he charged an exorbitant fee to allow his followers to escape on his personal barge, but instead of letting them go afterwards, he captured them and planned to sell them into slavery. However, he came into a naval crossfire between the Alliance and the Horde, destroying his ship and causing the goblins to wash up on the shores of the Lost Isles.

Surviving, Gallywix continued to plot against his own people, brainwashing them and forcing them to work under his will. However, when his biggest rival (i.e. the Player Character) showed up with the aid of the orcs and their former Warchief Thrall, Gallywix’s plans were foiled once and for all. Instead of killing the corrupt Trade Prince, however, Thrall offered to spare Gallywix if he and the Bilgewater Cartel swore to serve under the banner of the Horde. Gallywix agreed, pledged his people to aiding the new orc Warchief, Garrosh Hellscream.

After joining the Horde, he seems to keep up with Garrosh's warmongering at first, however, his appearances out of the public eye shows him differently. He was actually secretly vying for peace between the factions. He says that his people need security and profit, and under Hellscream, they get a lot of neither.

When you start as a goblin, you're rich, popular, strong, and proactively involved in your growing business empire, as well as being an honest dealer (by goblin standards). You spend half of your introduction throwing an awesome party. As a result, Gallywix doesn't like you much. Part of the reason he wipes you out and busts you right back to battling monsters in the wild is because he's worried about you taking his place as the next Trade Prince - even though you're portrayed as being mildly loyal.
Gazlowe 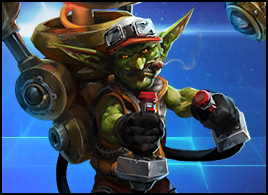 "You can get anything done for a price."

Monte Gazlowe is the official leader of Ratchet in the Horde-aligned territory of the Northern Barrens. He was formerly the Chief Engineer of the Horde engineering works in Durotar, and while keen to remain neutral towards the Alliance, he has no love for them and retains strong relations with the Horde. In Cataclysm and Battle For Azeroth, he's outright hostile to the Alliance, having the Horde player blow up a naval blockade in the former, and being a possible enemy member of island expedition teams to Alliance players in the latter.

Gazlowe enlisted the aid of Rexxar during Orgrimmar's construction to get rid of some kobolds that were preventing him from finding sources of water underground. After Warcraft III, he became neutral with his Cartel and became the Boss of Ratchet, offering quests to both factions. In The Shattering, Thrall contacts Gazlowe again after Orgrimmar was set ablaze by rogue elementals, and did his best to give his old friend a discount. He repeats this behavior towards Baine when he was trying to secure weaponry for the retaking of Thunder Bluff from Magatha, supplying Baine with weapons for a surprisingly low price. In Warlords of Draenor, he helps the Horde player build their Garrison.

After Gallywix is ousted from the Horde after Saurfang's Rebellion, Gazlowe is unanimously nominated by other Horde Leaders and the Bilgewater Cartel to become the new Trade Prince. Gazlowe hopes to lead the Goblins into a brighter future.
Druz 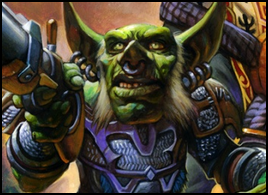 One pull of the trigger, and his hand'll rip right off.

Gallywix's chief enforcer and all around go-to guy. Despite the company he keeps, he's highly loyal to his trade prince and is a pretty amicable individual. 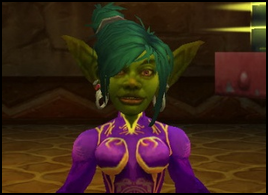 Emphasis on sassy.
"Okay, this'll work out just fine. We'll throw your party and by the time it's over I'm sure that the dragon will be long gone and the ground will stop shaking."

A Bilgewater Goblin secretary working at the Kajaro Trading Company in Kezan. When Deathwing attacked Kezan, Sassy, along with the goblin player character was able to get everyone off the island. Then on the Lost Isles, it was more or less Sassy's initial idea for the Bilgewater Goblins to rejoin the Horde. After the Catacylsm, she opened a trading post/souvenir stand in Stranglethorn.
Hobart Grapplehammer 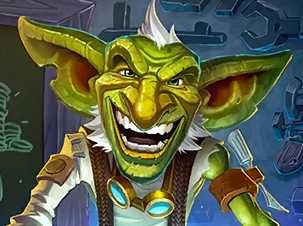 "Come here. I have a ... 'special project' requiring your assistance."

The Bilgewater Goblin Mad Scientist among Goblin Mad Scientists. Among other things, responsible for creating a race of sentient velociraptors, making Gilgoblins, and attempting to develop a series of laxitives for giants. After Kezan is blown up, he sets up shop in Azshara, where he ends up having to deal with constantly exploding laboratories and his gnomish rivals.
Grizzle Gearslip 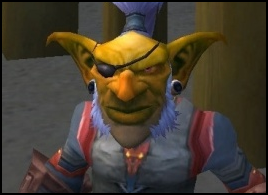 "Thank the laws of physics you're here!"
"I never thought the Warchief himself would come to bail me out!"

A goblin engineer introduced to the story in the first major patch of Mists of Pandaria. Foreman of several goblin projects in Pandaria and, apparently, indicative of the loyalties of the entire Bilgewater faction.