"We must put this misery behind us. We must enter a new chapter! And so I say to you that, as of this day, we are no longer high elves! In honor of the blood that was shed throughout this kingdom, in honor of the sacrifices of our brothers and sisters, our parents, and our children, in honor of Anasterian... as of this day we will take the name of our royal lineage! As of this day, we are sin'dorei! For Quel'Thalas!"
— Kael'thas Sunstrider, Former Lord of the Blood Elves

The Icon of Blood

The blood elves of Quel'Thalas are descendants of the Highborne of Kalimdor, who were exiled by the rest of the Night Elves to the Eastern Kingdoms, where they founded a great magical kingdom hidden in the northernmost forests of Lordaeron. There, they created the Sunwell, a mystical fountain of power that altered their appearance and empowered them from then onwards. They became known as the quel'dorei, or high elves, free to practice their arcane mastery and create a distinct, unique culture from their night elven forebears, centered on their sacred Sunwell. For nearly 7,000 years they prospered, overcoming every obstacle that threatened their kingdom, including the Amani Empire and the Old Horde. During the Second War, they briefly joined the Alliance of Lordaeron, their king, Anasterian, honor-bound to fulfil a blood debt to the Arathi line made centuries earlier, but seceded and went back into seclusion after the war was done.

Quel'Thalas was soon after attacked by the undead Scourge and their evil prince, Arthas Menethil, who had obliterated his own kingdom. While they put up a fight, the elves were also annihilated: 90% of the kingdom's population was slain, including their king, and their Sunwell was irrecoverably tainted. Prince Kael'thas Sunstrider rushed home to rally the survivors, and christened them the "blood elves" in honor of the fallen. The blood elves worked tirelessly to reclaim their home from the Scourge, also beset by the vengeful Amani remnants and weakened by a crippling addiction to magic; without the Sunwell to sate their hunger, they embraced the prince's teachings (in actuality, Illidan Stormrage's teachings) of draining magic from other sources. Reinvigorated, the blood elves succeeded in taking back much of Quel'Thalas, and rebuilt their great city of Silvermoon. Now without support from the Alliance, the blood elves turned to the reformed Horde.

While they've endured many tragedies over the years (including the eventual corruption and betrayal of their own prince to the Burning Legion), they remain a proud and driven race. Their long-term goals are to redeem the soul of their ancient civilization and protect their kingdom from any and all threats, as they move forward into a more prosperous future. 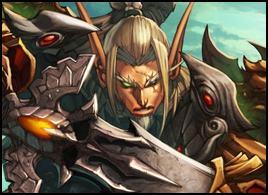 Who?
"All we can do is walk the road we are given with such dignity as we can muster, each to our own glory or demise, and pray that there yet remains something of our own hearts when all is said and done. By the Sunwell, I hope that there will remain something of mine."

The regent lord of Quel'Thalas and the blood elf racial leader. He was the former second-in-command to Ranger General Sylvanas, and following her downfall would probably have taken the spot had he not taken up the regency for the absent prince. Lor'themar was a war hero during the Second War, and survived the Scourge invasion during the third. He's been the blood elf racial leader since The Burning Crusade's launch, but received little development during the expansion despite the blood elves playing a central role throughout it.

Lor'themar's relentless underuse eventually turned him into a bizarre mix of an Ensemble Dark Horse and a running gag among the fandom, the regent lord's lack of plot relevance leading to a great deal of fanfiction centered around him (one of which won a global writing contest and was even canonized by Blizzard).

Lor'themar has gradually appeared more and more over the years, going from a largely writer-dependent character to a well-rounded leader combining aspects of all of his characterization thus far. His rise to power has been explored retroactively (In the Shadow of the Sun, Blood Of the Highborne) and his role in the overall narrative has been expanded considerably, taking him from a near-universal joke to one of the Horde's most popular characters.
Rommath 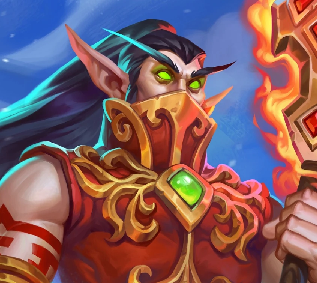 Grand Magister of Quel'Thalas and formerly a devout servant of Prince Kael'thas Sunstrider. He was initially sent from Outland back to Azeroth to teach the blood elves remaining in Quel'Thalas the ways of draining magic to sate their magical addiction, as well as to prepare its citizens for the exodus to Kael'thas' "promised land" of Outland. As Prince Kael'thas returned from Outland and betrayed his people, Rommath forsook his loyalty to the prince and instead chose to remain loyal to his people.

Despite the changes sweeping Quel'Thalas with the Sunwell restored, Rommath remains an ever-present reminder of darker days not too far gone. His will was severely tested by the betrayal of his twisted prince, and has motivated him to get proactive when it comes to the welfare of his people and country. 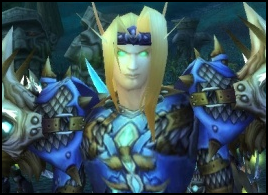 Are you kidding me? I run Sunwell a million times, and he gets Thori'dal!?

The Ranger-General of Silvermoon and the leader of the Farstriders, a blood elven group of rangers dedicated to defending their homeland against any and all threats to its safety and prosperity. A ranger of prodigious talent himself, Halduron was promoted after the fall of his predecessor, Ranger-General Sylvanas Windrunner during the Scourge invasion that saw Quel'Thalas nearly destroyed. Halduron was largely the Token Good Teammate for the blood elves prior to the end of their focal expansion, proving a more conservative and moderate voice in the affairs of people, contrasted by the more radical approaches of Rommath and his Magisters and Lady Liadrin and her Blood Knights. 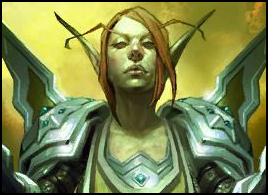 Matriarch of the Blood Knights? There's a period joke there somewhere.

The matriarch and supreme leader of the Blood Knight order, Lady Liadrin is an Iron Lady and Ice Queen whose hands were stained dark with evil by the climax of The Burning Crusade. After seeking forgiveness for her role in the downfall of the naaru M'uru (and learning that events were put into motion far beyond her control), Liadrin began her journey towards redemption, culminating in the restoration of the blood elves' sacred Sunwell. This monumental event has wrought on a new perspective for the Blood Knight matriarch, who has since embraced the positive teachings she had once disdained, and now seeks to break the magical addiction ravaging her people and restoring the sin'dorei to their greatness.

She was the main character in the long-awaited Blood of the Highborne, detailing her backstory and rise to power. She also made a long awaited return to World of Warcraft in Warlords of Draenor, being among the forces that cross the portal and helping the draenei defend Auchindoun from the Burning Legion, and then again in Legion, leading the blood elven side of the assault on Suramar City. She proceeds to be the main diplomat in recruiting the Nightborne elves into the Horde, and in Battle For Azeroth serves alongside Eitrigg and Rokhan in commanding the Arathi warfront. 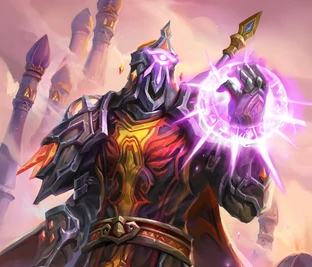 The leader of the Sunreavers, and a member of the Kirin Tor's Council of Six. He managed to get the Horde accepted into Dalaran, and even succeeded in the official readmittance of blood elves into the Kirin Tor. He remains deeply critical of the Horde's Warchief, Garrosh Hellscream, and is of the opinion that the Sin'dorei would do well to get as far away from his rule as possible.

Returns in Legion, on a quest to recover Felo'melorn and atone for his lapse of judgement in Mists. 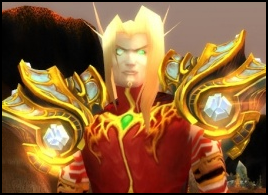 Why are Blood Elves interested in the Titans again?
"Greetings, my name is Tae'thelan Bloodwatcher. I have spent the better part of a lifetime training in the art of sorcery and gathering like-minded Blood Elves to form the Reliquary. You see, there are ancient, powerful relics found throughout this world that I plan to use to free my people from their addiction and unify them again as the proud, indomitable race we once were. Magic is something to be embraced and, I assure you, a force that can be utilized free of corruption with proper teaching. As it stands, the other races of the Alliance and even the Horde mock our kind for our half destroyed capital, still-standing statues of Sunstrider and blunder after blunder across the world. No more."

High Examiner Tae'thelan Bloodwatcher is the leader of the Reliquary. He's out to acquire powerful magical artifacts for his people's use, to free them from their addiction to magic through controlled means.