The Zandalar tribe is the progenitor tribe from which all other trolls arose. Most Zandalari were scholarly and valued knowledge; The Zandalari preserved troll history, and they worked to further the goals of troll society as a whole. Alarmed by the terrible losses of life among all trolls, the Zandalari tribe traveled around the world to reunite their race and rebuild their once-powerful empire. The Zandalari have begun to conduct bloody raids on territories that had once been theirs. The Cataclysm has been revealed to be the cause behind their sudden urges for conquest, for it's caused the Island of Zandalar to sink into the ocean.

However in Battle for Azeroth it is revealed that Zul exaggerated about the effects of the Cataclysm on Zandalar to further his own ends, and his actions in Pandaria and elsewhere were not at Rastakhan's order. After his failure to achieve his goal of conquest, Zul launched an insurrection against King Rastakhan, which prompted the ruler to seek aid from the Horde. 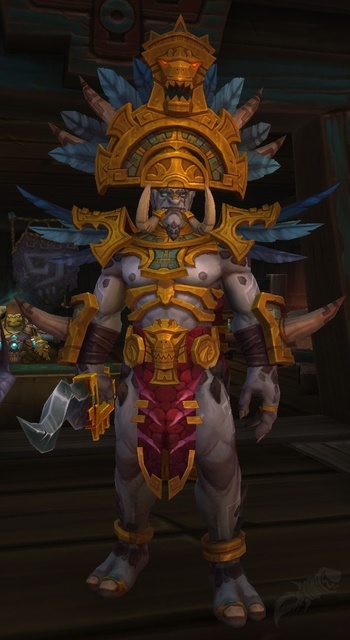 Rastakhan is king of all trolls on Azeroth, chosen by the ancient Loa of Kings, Rezan. He is an ancient and formidable Prelate and his word is law. He is ancient and hoary, but his wire-hard muscles speak to his strength. A string of Shrunken Heads hangs from his neck, and a humanoid skull is impaled on his spear. He rules from Zuldazar on the island of Zandalar. While he technically is the king of all trolls throughout the world, it is not an entirely accurate description. This is because trolls often have trouble working with each other, despite conferences on Zandalar. King Rastakhan is strong, wise, insightful, cunning and visionary. He is a big part of the reason that Zandalar’s influence is again felt in the world, as he is instrumental in organizing the 6-year troll conferences and in sending representatives to work against Hakkar. Most other trolls respect him as a powerful and wise leader, although some see him as indecisive and weak, bending to the manipulations of the Zanchuli Council that advise him.

He tries to be a good king, and holds meetings with concerned citizens often. Of course, this can take a while, and the line to be in the King's presence is long, but many wait for their turn to see him in his grandeur. Some Trolls see Zandalari as the highest and most righteous — Rastakhan is not one of these, and he insists on keeping Speakers from every tribe within the city, such that the most powerful tribe might aid them all. 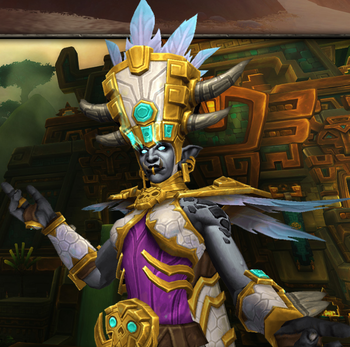 Talanji is the daughter of King Rastakhan and the Princess of the Zandalari Empire. As royalty, she is blessed by the Loa of Kings and Queens, Rezan, and is one of few people who can invoke direct council with him. Horde players first encounter her behind bars in a prison in Stormwind, alongside Zul, and you work with Rokhan and Thalyssra to break her free, which earns the Horde the King's gratitude and a place in Dazar'alor.

Talanji herself is known for being adventurous and outgoing, frequently taking time to walk the streets of her city and tour the lands of the Zandalari Empire. She is known to go exploring, seeing how outsiders run their own kingdoms and rule their own lands. Her abilities as a Priest are impressive, as Rezan is one of the most powerful Loa and grants her great magical power, although her power is diminished when Rezan perishes at the hands of Zul.

She eventually leads an expedition into Nazmir, alongside Rokhan, to root out the threat of the Blood Trolls bringing civil war into the empire. 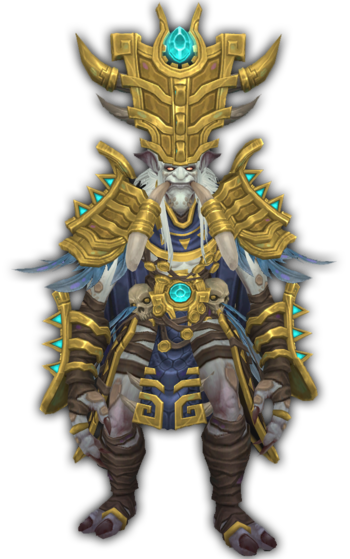 "From the wreckage of the Cataclysm, the Troll Empire will RISE AGAIN!"

Zul is the name of a mysterious troll prophet. After the Cataclysm devastated Zandalar, Zul took a group of Zandalari warriors, led them them across the globe, united the other troll tribes together, and began the assault on Pandaria to regain ties with the mogu. He later attempts a coup against King Rastakhan, leading to a disastrous civil war.

Among the Zanchuli Council are many Priests and Mages of incredible power and forbidden knowledge. One of the most respected of these is Zul. Even as a child his dark and terrible visions had come true down to the last horrifying detail. He commanded fear and respect as one of the dark prophets: seers capable of witnessing great tragedies before they come to pass. 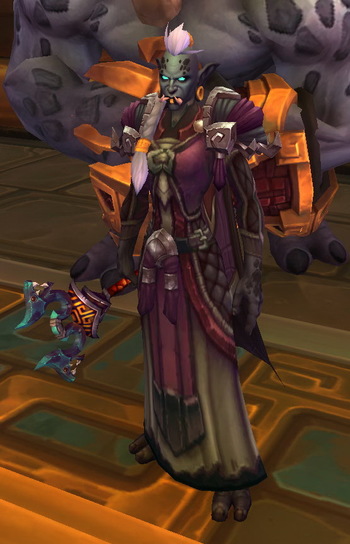 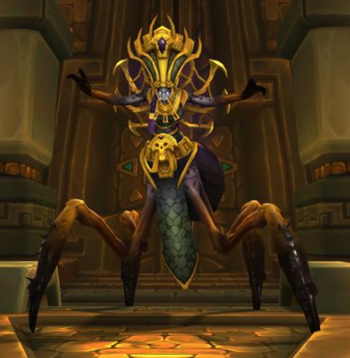 Yazma is a member of the Zanchuli Council advising King Rastakhan, and serves Shadra, the spider loa. She later betrays Rastakhan once Zul attempts his coup d'etat, kills her loa and absorbs her power. She serves as the final boss of the Atal'Dazar dungeon.

Hexlord Raal is a member of the Zanchuli Council advising King Rastakhan, and serves Pa'ku, the Pterrordax Loa. He loves flying, almost as much as he enjoys invoking his Loa's command over the winds to batter his enemies. He likes to laugh, and cracks snarky jokes, something that Loti comments as annoying.

Wardruid Loti is a member of the Zanchuli Council advising King Rastakhan, and serves Gonk, the Raptor Loa. You work longside her to root out Blood Magic corruption within Zanchul. She's fairly laid-back, in a casual sort of way, and finds Pa'ku and Hexlord Raal to be a bit annoying and uptight. It isn't until later you find out that Raal and Loti are actually married.

Unlike Zul, Yazma, and Vol'kaal, Loti is one of the few members of the Zanchuli Council with pure intentions, and remains loyal to Rastakhan.