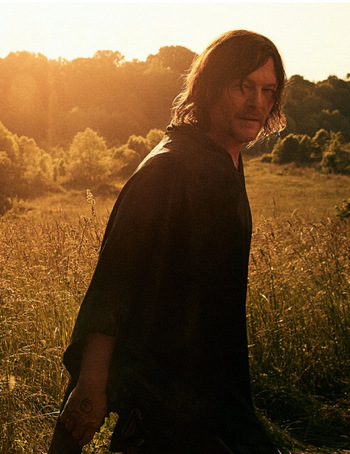 "I ain't ever gonna kneel."

"You want to know what I was before all this? I was nobody. Nothing."

An original character created for the show, Daryl Dixon is one of the main protagonists of The Walking Dead with enough examples of tropes to necessitate his own page.

Daryl is one of two redneck brothers who joined the Atlanta camp with the initial intent of robbing them, but Daryl grew away from the negative tendencies of his abrasive elder brother Merle when he went missing. Daryl proved himself to be a loyal, hard-working man who goes more than the extra mile to help the group when they're in trouble. Daryl took it upon himself to lead the search for Sophia, earning Carol's friendship in the process, and ultimately became the group's second-in-command after Shane's death.

After the group moves into the prison, Merle resurfaced as the tyrannical Governor's lieutenant. Daryl was reunited with his during a raid on Woodbury, and decided to strike out with his brother when the group refused to accept him even after The Governor exiled him. Daryl realized where his true place was, and Merle was forced to accompany him to the prison anyway. Daryl tried his best to keep tabs on his reckless brother, and was forced to put him down when he sacrificed his life to attack The Governor's militia and reanimated.

After Rick stood down as leader, Daryl joined the governing council of the prison group, but returned from a supply run to find The Governor on their doorstep with an army. Daryl and Beth fled the destroyed prison together, and grew close until she was abducted by Grady Memorial Hospital. Daryl reunited with Rick and the group at Terminus, and also found Carol again after they escaped. However, a standoff with Grady Memorial ended with Beth dead, devastating Daryl for weeks.

After the group moved to Alexandria, Daryl found himself forming a murderous rivalry with Dwight, a lieutenant of the Saviors. As the two groups went to war, Daryl became embittered by his accidental part in the death of Glenn and a period of incarceration and torture at the Sanctuary. After Rick and Michonne decided to spare Negan upon defeating him at the end of the Savior War, Daryl plotted with Maggie to take vengeance on their own terms. However, nothing prepared Daryl for the apparent loss of Rick a year and a half later. Daryl resigned himself to living alone in the woods with his new companion Dog for six years, but ended up finding himself pulled back into the communities as a leader and warrior yet again when the threat of the Whisperers raised its head.

Daryl and Merle are also the protagonists of The Walking Dead: Survival Instinct, a First-Person Shooter by Activision that tells the story of the brothers before they arrived at the Atlanta camp.