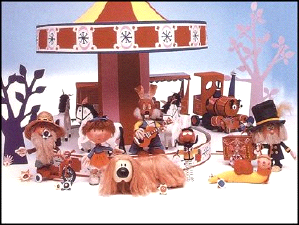 The Magic Roundabout is an English dub for a French stop-motion show, Le Manège Enchanté. When it was translated into English by Eric Thompson (father of actresses Emma and Sophie), rather than voice act the characters, he chose to narrate the whole thing himself. Because Thompson despised the original writing, he dubbed the show based purely on the animation, including many gags that appealed to parents. It subsequently became a Cult Classic in the United Kingdom and was adapted into two feature films. Many viewers of the French show, unaware of the redub, were baffled by the show's English popularity.

In the early 1990s, after Thompson's death, Channel 4 acquired some episodes that had not been translated and hired Nigel Planer to adapt them in a pastiche of Thompson's style.

Dougal and the Blue Cat (1970/1972), the first movie, was itself a cult classic. It contained a satirical parody of racism (Blue is beautiful! Blue is best! I'm blue! I'm beautiful! I'm best!) as well as the first (and only?) songs to appear in a Magic Roundabout setting. The other film, a CGI version titled simply The Magic Roundabout (2005), had a much more epic plot and was later released in the US (with all but two of the original British voices re-dubbed) as Doogal [sic]. Despite its promise, the American release failed to capture the spirit of the original series and fell into obscurity.

The 2005 film was decently successful in Europe, which led to a 2007 CGI reboot of the show being produced. The series directly follows the film's events and was produced by the same animation studio. This version of the series ran from 2007 to 2010.

This English localization provides examples of:

Dougal Goes To The Moon

When Dougal does the third astronaut test, he grows a small bone to be gigantic and learns that he should only do that once on the moon.

Example of:
Now You Tell Me

Dougal Goes To The Moon

When Dougal does the third astronaut test, he grows a small bone to be gigantic and learns that he should only do that once on the moon.