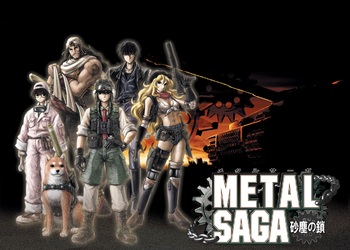 A console RPG series developed by Crea-tech and published by Data East, taking place in a Mad Max style post-apocalyptic world, with a healthy dose of Cattle Punk thrown in for good measure. The player takes on the role of a young bounty hunter, cleaning up criminals and monsters and learning about the world.

The overall premise is that it's about 100 years or so after the Great Destruction, and the wasteland is an okay place to-oh wait, wrong game. While its post-apocalyptic adventure setting does share some similarities to the Fallout series, namely turn-based combat, open world and open-ended gameplay, and the Cattle Punk themes, this series actually precedes that by about 6 years, the first iteration coming out on the NES, and brings in the element of locating and acquiring tanks that you can then upgrade with equipment such as main cannons, engines, sub guns, and armor to battle tougher enemies.

The backstory of the series focuses around an apocalyptic event called the "Great Destruction." Details are unclear, but what is known is that the Great Destruction was started by a massive supercomputer named Noah who was originally built by humanity to save the world from environmental catastrophes. Noah, after running countless simulations and attaining sentience, decided that the best way to save the planet was to destroy the ones responsible for causing said environmental catastrophes...which happened to be humanity so one can guess where it went from there. A century later, after Noah's defeat, civilization has rebuilt itself in the ruins of the world, which, in the wake of the apocalypse, has changed into a new, and dangerous, frontier with threats such as murderous robots, homicidal military equipment left over from before the Great Destruction, psychopathic bandits, and...giant knife-wielding fruit. Yeah, it's that kind of game. At the forefront of humanity's survival efforts are bounty hunters (simply called "Hunters") who confront these threats head-on in hopes of collecting the lofty bounties posted on the more powerful and dangerous threats. Thankfully, there's plenty of tanks and other forms of heavy firepower left over from the Old World to make use of.

In all the games, the player takes the role of a young Hunter who ventures out into the world to take down various bounties, though the overall plot can differ depending on the game. All of them are open world RPG's however, with very nonlinear plots that aren't completely mandatory to follow through (and, in some cases, may be completely missed unless you know what you're doing) though each game has at least one main plot that leads to a canon ending. As mentioned above, another major trait of the series is the use of tanks and other vehicles to battle your enemies, which can be obtained by buying them, completing quests for them, obtaining them from defeated enemies, or by simply finding them with a metal detector and digging them out of the desert.

As of right now, the only games that have left Japan are Metal Saga in 2005 and Metal Max Xeno in 2018, with every other title being a case of No Export for You.

The games in the series thus far: