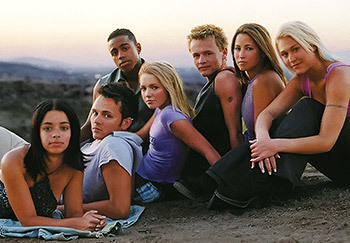 S Club 7 was a pop band that formed at the end of the 90s, following in the footsteps of mixed gender groups like Steps, and went on to achieve worldwide success. Their first single "Bring It All Back" brought them instant popularity and they were heavily marketed as "the next big thing" for kids with a TV show (similar in style to The Monkees) as well as various TV specials.

As the name suggests, there were seven members to the band:

After losing Paul at the beginning of Viva S Club, the band continued on with six members for about another year and one more album (Seeing Double) before disbanding. However, in 2014, all seven members reunited for a song medley for the British charity telethon Children in Need, and announced a short reunion tour in the summer of 2015.