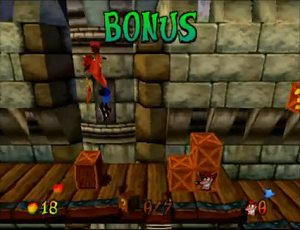 The friendly Bonus Stage (not to be confused with the less friendly Bonus Dungeon and Brutal Bonus Level) is a level or area in a video game that has all or many of the following traits:

This is also not to be confused with the web animation of the same name, or Bonus Round, which is for game shows and tends to function similarly. See also Secret Level.