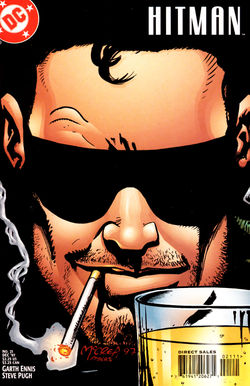 "I'm interested in Hitman as a character in the larger DCU, and 'the area of Gotham so bad that Batman doesn't go there,' because Batman is a dude that has paid multiple visits to a planet literally called Apokolips."
— Comics Alliance on

Question: What would happen if you crossed over Sergio Leone, John Woo, Sam Peckinpah, The DCU, and The Boondock Saints?

Experienced tropers would say "A New Old Western Heroic Bloodshed Fantastic Noir taking the piss out of superheroes with an Irish accent."

Then you'd wonder if someone was actually crazy enough to make something this Troperiffic.

Aaannd then you'd find out the real answer is: Hitman.

Hitman is a Cult Classic comic book series written by popular and controversial writer Garth Ennis of Preacher and The Punisher fame and drawn by frequent Ennis collaborator John McCrea, starring Tommy Monaghan. It had its origins in the 1990s Dark Age-tastic Bloodlines Crisis Crossover, where aliens invaded Earth to murder human beings and drain their spinal fluids, which somehow gave the few survivors superpowers in the process. It was easily forgettable, and the cast of '90s Anti-Heroes equally so. Bloodlines was meant to profit off the Dark Age phenomenon by creating a new batch of "heroes" for the era, because, after all, Darker and Edgier sells, doesn't it?

A former Marine and professional hitman, Tommy hangs out in the Cauldron, the poor Irish district of Gotham City. He frequents a bar with his buddies and father figure. During the Bloodlines crossover, in The Demon Annual vol. 3 #2 (1993), Tommy survived an encounter with one of the invading Alien knockoffs and gained two abilities: X-Ray Vision and Telepathy. Both powers prove to be rather handy to a man of his profession.

With these, a lot of guns, and a loyal band of friends, Tommy's contracts will always set him off on insane adventures one can expect in a colourful world like The DCU, but this being a Garth Ennis book, there's always a darkly humourous and satirical bent. What other comic can you read about hitmen fighting zombie baby seals, two-headed mafiosos, Ricean vampire pansies, gun-demons, dinosaurs, Eldritch Abominations, the Justice League, Batman and Lobo?

The Hitman solo series lasted for 61 issues, running from April, 1996 to April, 2001, with a 2007 two-issue series, JLA/Hitman, which serves as a follow-up. This series is chock full of Ennis' signature trademarks, yet it also emanates his signature subtle compassion. In a series that mostly exists to thrive on the Rule of Cool, it can be surprisingly humane, compassionate, tragic and heartwrenching, with a finale that will reduce you to tears. This is primarily because Hitman (like most Ennis series) is a victim of Cerebus Syndrome, but it never lost its sense of humour or fun, even past the turning point of the syndrome.

In 2015, a spin-off series called All-Star Section Eight, concerning Six-Pack trying to put together a new team after these years, debuted.

Do not confuse it with the Hitman franchise that started with the eponymous video games; for its comic book series go to Agent 47: Birth of the Hitman.