The Butterfly Law Firm is one among the many law firms that specializes in defending persons accused of using magic before the courts. 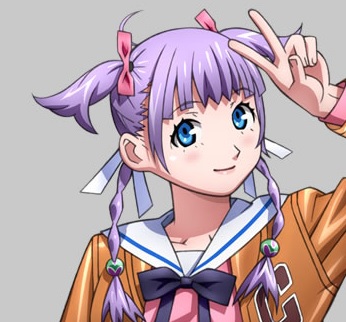 The main protagonist of Wizard Barristers. A rookie Benmashi who believes the best in her clients. Due to her mother being incarcerated for something she may not have done, Cecil hates people who are prejudice against Wuds. She was originally from Ontario, Canada before she permanently relocated to Taito, Japan to work for Butterly in their Ueno office. 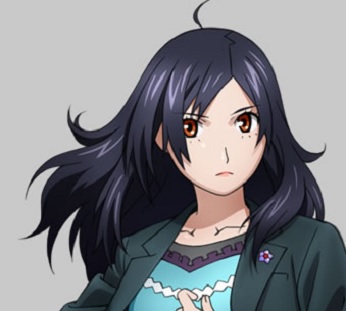 A rookie wizard barrister joining Butterfly the same time as Cecil. She is a lot more inexperienced than Cecil and is jealous of her for having more attention, given that she's a child prodigy. 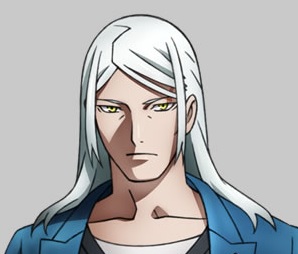 A very quiet and reserved member of Butterfly. Mitsuhisa used to be a public prosecutor in the magic courts before he became a wud, which forced him to leave government service to work as a wizard barrister due to the discrimination against wuds under the Magic Prohibition Law. He's known as "The Courtroom Terminator" among his peers. 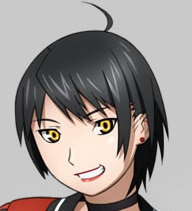 A young woman in Butterfly, she tries to be the big sister figure to Cecil after she was recruited to work for the law firm. Moyo specializes in paralegal matters on behalf of Butterfly in court cases. 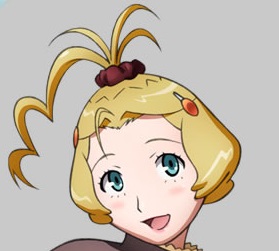 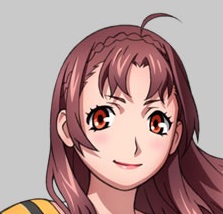 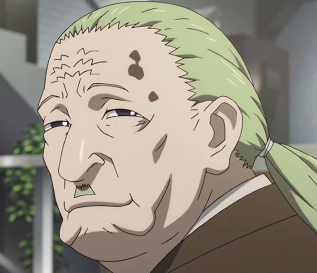 An old veteran of the law firm, he gives the younger barristers advice and suggestions based from his experience with regards to the wuds and their presence in the modern world. 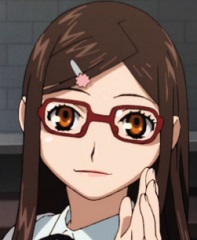 The secretary of the Butterly law firm. Aside from taking and answering calls, she usually helps out her colleagues by acquiring information for their cases when it's needed. 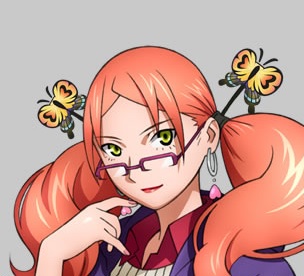 One of the two senior partners of Butterfly alongside her younger brother, Seseri. Ageha is also a senior wizard barrister. She also tries to accommodate the actions of her associates as much as she can. In addition, she's much cool and collected than Seseri. Her brother calls her "Agehappi". 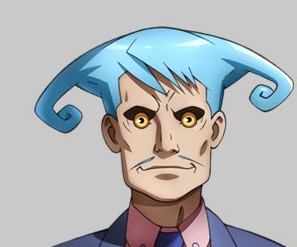 The second senior partner of Butterfly alongside his older sister, Ageha. He's known to be loud and angry when things don't go too well.

The various Wizard Barrister works alongside these familiars summoned to the real world. 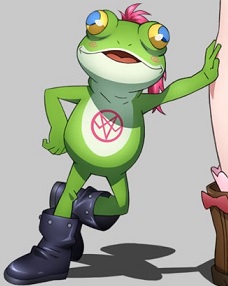 Cecil's familiar while she's living in Japan, he takes on the form of a frog. Unfortunately for her, Nanagenie is a pervert who tries to take advantage of her by trying to grope her at every turn. Despite this, he's also a skilled cook during her stay in Tokyo. 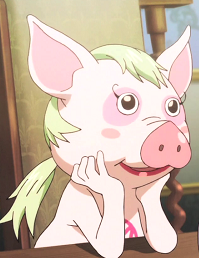 Mitsuhiya's familiar, who was summoned after his hydrokinesis powers were awakened prior to the start of the show. Unfortunately for him, she happens to be a Covert Pervert who wants to sleep at his side. 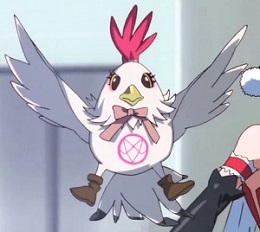 The personal familiar of Tsunomi, she unfortunately tries to be the voice of reason when Tsunomi goes to Cloud Cuckoo Lander territory and tries to stop her before something goes wrong.

Another law firm that specializes in defending persons accused of using magic before the courts, they are a known rival of Butterfly. 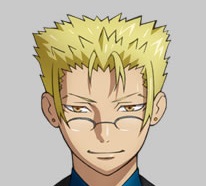 A known senior partner of the Shark Knight law firm, he first shows up in the series trying to recruit Cecil to work for them after hearing of her first successful wizard barrister case. 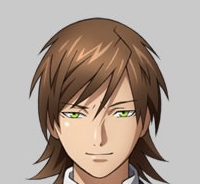 A known associate in the Shark Knight law firm, he is usually seen alongside Kiba. It does appear that he has some shady ties to an unknown group trying to observe Cecil's awakening of her more... latent skills.

The Metropolitan Police Department in Japan are tasked by the National Police Agency to apprehend wizard criminals and terrorists operating in the country. 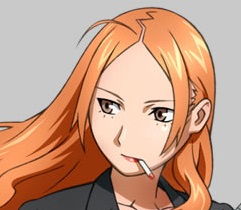 A career police officer with the Tokyo Metropolitan Police Department, she's a plainclothes officer with the MPD's Section 1. Usually partnered up with Shizumu Ekuso, Quinn is always seen with a cigarette in her mouth. Due to the nature of her job, she discriminates somewhat against wud criminals and terrorists and the barrister who defend them in the courts. 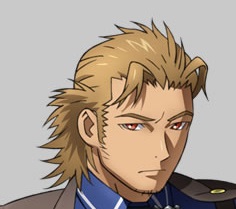 Another career police officer with the Tokyo Metropolitan Police, he's a plainclothes officer with the MPD's Section 1. Usually partnered up with Quinn. Like her, Shizumu does not lie about his discrimination with wud criminals and terrorists and the barristers who defend them in the courts.

The various clients the Butterfly law firm takes on. 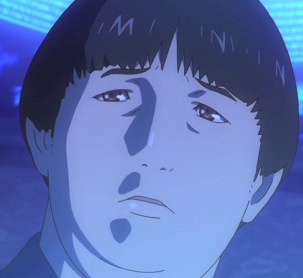 A former bank employee, he was harrassed by his co-workers for being a wud. He left the bank despite being treated well by Keiko Endo, one of his co-workers who treated him well. When Souta tried to make a visit, he was confronted by a No Face gangster who threatened to kill her. Due to use his magic to kill him, he was arrested by the police and treated as a suspect. He was the first client for Cecil on behalf of Butterfly. 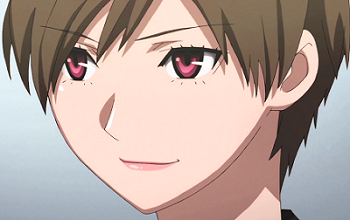 The girlfriend of Masato Namase, a local stuntman, whose life changed when he was killed in the magic courtroom. She was taken as a client after she was arrested for killing Oizumi, Masato's former manager. The police and prosecutors believe that Mayu killed Oizumi as an act of retaliation for the trial two years ago. 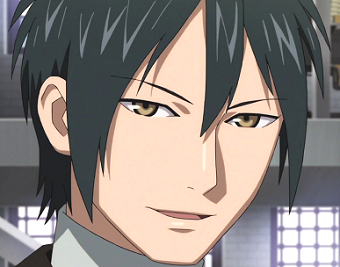 A young man who comes to Butterfly in order for them to be the defense lawyers of his older twin brother Tsukuji, who had become notorious in the wud community for being a serial killer. He is convinced that his serial killer condition was due to the abusive upbringing the two had before and after they were placed under custody of the state in an orphanage. Rei believes that his brother has a psychopatic personality due to dissociative identity disorder.

A rogue's gallery in the Wizard Barrister universe. 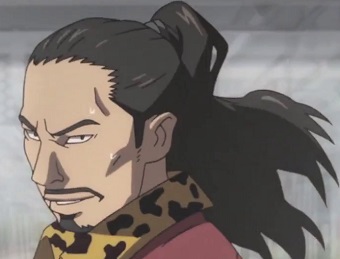 A wud criminal who was being pursued by the Special Assault Team to a deserted subway train at the start of "Swords and Scales". He specializes in using fire magic. 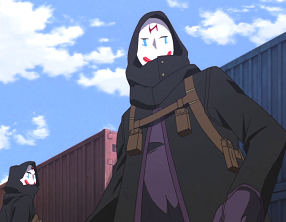 A wud gang that specializes in hit and run robbery attacks on financial institutions. They appear in "Swords and Scales" and in "Hard Case". 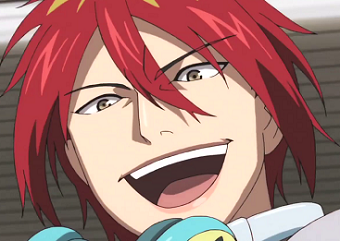 A notorious wud known by the police for killing 15 people, all of them being wud users. It is said that he became a serial killer due to dissociative identity disorder, which came about to the abuses he and his younger brother Rei had endured after being placed in a state-managed orphanage in their teenager years. 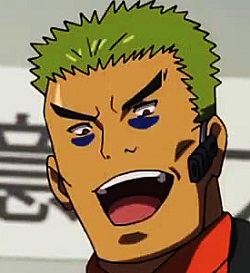 A wud terrorist group responsible for taking Cecil and some young kids and a cram school teacher hostage, they wish to achieve "world domination" with wuds being the one in charge. Unfortunately, they appear to be Terrorists Without a Cause in their latest mission since they were helping Shizumu try to awaken Cecil's dormant magic powers with everyone in the group summarily executed to make sure they won't tell the public about his wud powers. 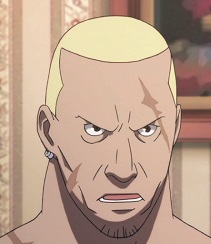