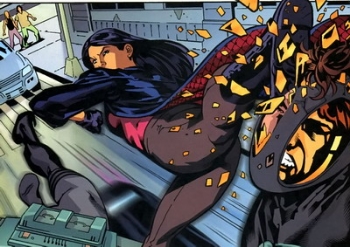 Is this beating for business or the buzz?
Both!

"...I respect courage. Even foolish courage like yours. From such foolishness is born the soul of a warrior. We will meet again when you are grown, little bird. And that day will be the last on Earth—for one of us."
— Lady Shiva, to Tim Drake

Lady Shiva is best known for her reputation as the single greatest martial artist in the DC Universe, in terms of pure skill. Other masters, such as Batman, Nightwing, Black Canary, and others, are usually depicted as being inferior to her or just barely on equal terms. But while Shiva craves a fair fight against a Worthy Opponent, most crimefighters encounter her as an obstacle hired by the current Arc Villain, whereupon they have to figure out a way to deal with her without being lured into a fair duel. Despite her abilities, she has been defeated on several occasions by numerous characters, but almost always with some kind of Hand Wave to explain it.

Though she began as the Arch-Nemesis of the aforementioned Richard Dragon, she is FAR more famous than he ever became, and thus is more known as the antagonist of Batman, Tim Drake, Cassandra Cain, and the Birds of Prey. She's developed into something of a Noble Demon, showing Villain Respect to characters whose warrior prowess she respects, especially those she thinks may be able to succeed her as the top fighter in the DCU. She's usually willing to train anyone (hero and villain alike) on the condition that a year or so later, they hone their skills and face her in a fair Duel to the Death.