Video Game / Berserk and the Band of the Hawk
aka: Berserk 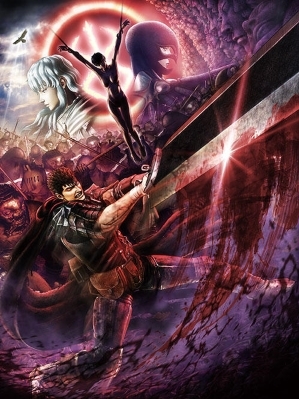 As with the main Dynasty Warriors series, players can choose one of eight characters and fight against waves of enemies in Hack and Slash combat while completing mission objectives on a large battlefield. The gameplay is similar to One Piece: Pirate Warriors: The basic controls are normal attack, charge attack, quick step, and guard. Normal and charge attacks can be chained for combo attacks. Attacking enemies builds up a Frenzy guage until you can enter Frenzy mode, in which your attacks are more powerful and you take no damage. Enemies you kill in Frenzy mode release Lost Souls, which fill up a gauge to perform a Death Blow attack that inflicts massive damage. Characters can also undergo a Transformation that changes their form and attacks.

The game spans the Golden Age, Black Swordsman, Conviction, and Millennium Falcon arcs from the manga. Both in-engine cutscenes and clips from the anime movie trilogy Berserk: The Golden Age Arc are used to help tell the story. Watch the story trailer here

, and find out more about the game on its European and American websites here

Warning: All spoilers up to volume 32 are unmarked