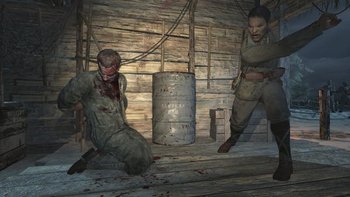 And this is just the tip of the iceberg.
"The real war will never get in the books."
— Walt Whitman
Advertisement:

A form of Kick the Dog in war movies, where the heroes (or more often, someone else on the same side as the heroes) or villains commit a war crime of some sort, most often mistreatment of enemy prisoners of war or civilians. Done to illustrate that most wars aren't instances of Black-and-White Morality, as well as the mix of good and bad in most armies and how wartime can change a person's personality. Sometimes, these crimes will be reprisals for earlier ones against the heroes' side. May sometimes overlap with Token Evil Teammate if the one performing the crime is on the "heroic side" or Token Good Teammate if it's someone on the opposing side refusing to perform such a deed. In a heroic portrayal, these crimes are justified for the principles of Pay Evil unto Evil or a Roaring Rampage of Revenge.

In a villainous portrayal, it's often shown to establish just how vile the antagonist faction is. Usually, these are done as reprisals against attacks by La Résistance, or civilians found to have been sympathizing with such groups. Sometimes, mooks witnessing but not partaking in these war crimes will speak out against such actions, and for good reasons. Often, this can result in higher-ranking soldiers or officers forcing their subordinates to commit questionable acts themselves, lest they be made an example of.

A fairly young trope that emerged from the previously-hidden Truth in Television of The Vietnam War. Often used to show that War Is Hell and/or to avert Do Not Do This Cool Thing. Compare Shoot the Medic First, Sink the Lifeboats, Leave No Survivors. Contrast The Women Are Safe with Us, Would Not Shoot a Civilian.

It is important to note that this scene, whether in real life or in a work, does not mean the entire army Rapes, Pillages, and Burns. Unless the work in question is an Author Tract about how Armies Are Evil, in which case it might be included for this purpose.

See also The Laws and Customs of War.