This page lists the "creatures" of Nirn. For an index of all races, see here.

Note: Elder Scrolls lore is generally not clear-cut. Reasons for this range from biased in-universe sources intentionally only giving you only one side of a story, to sources lacking critical information or working from false information, to the implication that All Myths Are True, despite the contradictions, or that at least all myths are Metaphorically True. Out-of-game developer supplemental texts (frequently referred to as "Obscure Texts" by the lore community) are more trustworthy, but are frequently left unofficial and sometimes later contradicted. Because of this, it is entirely possible for two contradictory statements in the below examples to both be true. (And due to frequent events in-universe that alter the timeline, both may literally be true in-universe.)

Alit
A predatory species native to Morrowind.
Ash/Corprus Creatures
Ash and Corprus creatures are a variety of humanoid enemies associated with the Dunmeri Physical God, Dagoth Ur, and the "divine" Corprus Disease he channeled through the Heart of Lorkhan in the 3rd Era.
Ash Hopper 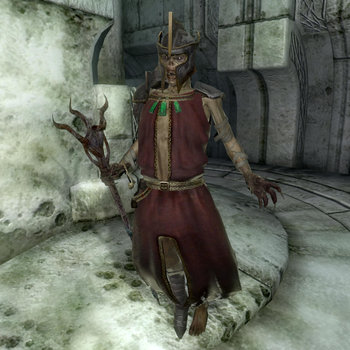 "Like a spider in his web, he sucked all their power into himself,
Mannimarco, Worm King, world's first of the undying liches.
Corruption on corruption, 'til the rot sunk to his very core,
Though he kept the name Mannimarco, his body and his mind
Were but a living, moving corpse as he left humanity behind."
— Mannimarco, King of Worms

Liches are powerful undead wizards, having sacrificed their very lives and humanity in exchange for extreme magical power. They can be found throughout Tamriel where they can often be found using their gifts in the school of Necromancy to create legions of undead followers. As with many of Tamriel's supernatural creatures, there are regional variants when it comes to the specific powers and abilities of liches. Additionally, there are several rumored means to become a lich, most involving the consumption of a potion made up of powerful magical ingredients. The most famous lich in Tamriellic history is Mannimarco, the "King of Worms", who is said to be the first mortal to successfully become a lich. 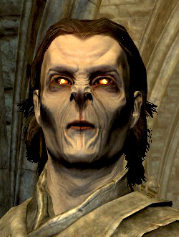 A stage 4 vampire from Skyrim.
"Know first that we are no simple tribe of savages, tearing throats with the orgiastic abandon of our scattered, tribal brethren. Ours is a civil fraternity, to which we are bound — every one — by our dual hunger for flesh and influence."
"To Kin-father Molag Bal, who brought forth the Bloodmatron Lamae to spite Arkay, we owe our existence, as do all vampires, though not all honor Him."
— Manifesto Cyrodiil Vampyrum

Tamriellic Vampires are preternatural beings, typically considered a type of undead, who are feared and loathed as abominations throughout Tamriel. Vampirism is technically a form of disease, generally starting off innocuous before developing into full Vampirism, after which it is nearly impossible to cure. The diseases which cause Vampirism can be transmitted through any wound inflicted by a Vampire. There are numerous regional bloodlines of Vampires (with over 100 known, according to some sources) with many differing features and abilities. These bloodlines generally have a few traits in common, however, such as the presence of fangs, pale skin, agelessness, immunity to other diseases, enhanced night vision, sensitivity to sunlight (ranging from irritation to outright burns upon exposure), and the need to consume humanoid blood (or another vital substance).

Vampirism is a creation of Molag Bal, the Daedric Prince of Domination and Corruption. Mortals who obtain their Vampirism directly from Molag Bal are known as "Pure-blood" Vampires and typically have greater powers as a result. These Pure-bloods hold those who become Vampires via disease ("half-breeds") in low regard. All non-Pure-blood Vampires can trace their lineage back to Lamae Beolfag, known as the "Blood Mother", who became the first to suffer the disease following being raped by Molag Bal. Molag Bal created the disease to upset the balance of life and death maintained by one of his fiercest enemies, the Aedric Divine Arkay.

For the specifics of vampire clans as factions, see the factions subpage.

Were-creatures
"Werewolves are sturdy hybrids with powerful jaws and claws on both hands and feet. They stand three hands taller than an Orc and exhibit severe bloodlust. If you encounter one, attempt to flee at all costs unless you feel supremely confident in your arms and armor. If possible, thrust the indigenous population into the path of the lycanthrope, so it sates its appetite on them while you retreat to cover or your mount. If you must fight a werewolf, arm yourself with any silver weapon, as these have proven extremely effective. However, prepare for severe gash wounds and the possibility of becoming infected."
— Dealing with Werewolves

The Were-creatures of Nirn, also known as Lycanthropesnote Though this should technically only refer to werewolves, as "lycan" comes from the Greek word for "wolf", it is frequently used to refer to all were-creatures, are supernatural beings made up of a cross between a beast and their original species. Like Vampirism, Lycanthropy is technically a disease and can be spread through any wound inflicted by an infected individual. It is easily cured within the first few days of being contracted, but once it fully progresses, it becomes far more difficult to cure. There are also rare instances of the disease being hereditary. There are numerous variations of were-creatures found through Tamriel, with many appearing only in certain regions. Werewolves are by far the most common, and can be found across the entire continent with higher concentrations in the northern regions. The exact effects of the disease vary greatly between individuals and regions. The most common effect is an involuntary transformation into a humanoid beast form at night, with the frequency of the transformation varying from nightly to monthly. Other individuals have the ability to transform voluntarily. For those who transform involuntarily, they must commonly kill a sentient being during the night or risk returning to their mortal form in an extremely weakened state.

Lycanthropy is a creation of Hircine, the Daedric Prince of the Hunt, who bestows it as a blessing. He considers were-creatures to be the epitome of the nature of a hunt. During the night, they are vicious beasts who hunt their prey. During the day, they become the hunted to the very same prey. Were-creatures also have a spiritual connection to Hircine, as he claims their souls upon death to forever serve in his realm of Oblivion, known as the Hunting Grounds.