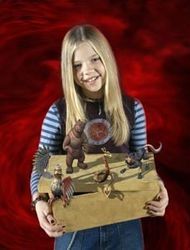 An eleven-year old Scottish-American girl who lost her mother to cancer, before moving to Edinburgh with her father Ross. On her eleventh birthday, she receives the Shoebox Zoo from a mysterious shopkeeper, and can magically bring them to life. She is actually The Chosen One of a prophecy to find Michael Scot's prized Book of Forbidden Knowledge. However, she refuses the call, unwilling to take on such responsibility. Mostly moody and angsty throughout the series, but with good reason.
Michael Scot

The grouchy Great Wizard of Scotland, Michael Scot is an 1100-year old mathematician, scientist, alchemist and wizard who created the Book of Forbidden Knowledge. His pride and arrogance led to turning his four students into toys after they stole the Book, and he follows a prophecy that one day a Chosen One will find the Book.

Michael's manservant. Eleven-hundred years ago, he stole the Book of Forbidden Knowledge from his master to protect him from its evil, and shortly after it disappeared. As punishment, he was made immortal until the Book was found. By the time of the series' beginning, McTaggart works as a mole for Michael, acting as a servant for Toledo.
Ross Mc Bride

Marnie's father. Ross works as a librarian at Edinburgh University Library, and struggles to care for Marnie after the loss of his wife. He remains unaware of the magical goings on around Marnie, believing her strange behaviour is due to her age or grief.
Kyle Stone

Marnie's best friend from America, Kyle quickly becomes her Secret Keeper and ally in the second season. Pragmatic and honest, Kyle comes from a long line of magical Native Americans but is reluctant to embrace his magical inheritance.
Nathaniel Stone

Kyle's grandfather. He is the Medicine Man of the Lakota people, and a descendant of Chief Stonebear. Nathaniel acts as a guide for Marnie in place of Michael, but advises her through words rather than action.

The titular characters of the series. The Shoebox Zoo were the four students of Michael Scot, who stole the Book of Forbidden Knowledge to prevent it from corrupting their master, and they ultimately lost it. As revenge, Michael transformed them into living toys and placed in a form of sleep until the prophesized Chosen One awakens them. Only when the Book is found can they become human again.
The Shoebox Zoo As A Whole

Tropes shared by the characters include:

A pompous, glory-seeking silver eagle dressed like a knight, who acts as the self-appointed leader of the group.
Bruno

A kind-hearted, friendly, but dim-witted bear made of stone.
Ailsa

The sole woman of the group, Ailsa is a cynical golden adder with a distrustful nature about her.

A blue-and-gold painted wooden wolf, Wolfgang is a deceptive character with a shady past and even shadier motives. Has long-standing hatred towards Michael, and eventually acts as a mole for Toledo just to spite him and Marnie.
Hunter

A Native American spirit who can materialise as a horse-shaped dancing stick. Introduced in the second season. He is a friend to Kyle and Nathaniel, wild and excitable, but also honest and one for justice. Able to shapeshift into an actual horse.

The series' central antagonist. A mysterious, evil shapeshifter with a passion for white-coloured clothes and Spanish culture, Juan Roberto Montoya de Toledo is as old as Michael and seeks to obtain the Book to cover the world in eternal darkness and prove his superiority to the wizard. During the first half of season one, he disguises himself as an Evil Brit student named John Roberts.
Los Contrarios

The evil twins of the Shoebox Zoo created by Toledo to spite Michael's own students. Dark, blind and driven by evil thoughts, they spend most of their time growing in crystalline eggs until awakened by the opening of the Book. Their time on screen is short.
Aurora Dexter / The Dawn Queen

An television medium from Valentine, Nebraska, who communicates with the dead for viewers, but is considered a Phony Psychic. Mother of Marnie's childhood rival Becky. She shares the same birthday as Marnie, and is actually a prophesized Dark Messiah who will destroy the world by gaining the Book of Forbidden Knowledge and become the Dawn Queen. Toledo possesses her to fulfil this prophecy.

The series' Narrator. Does what is expected of a narrator, but brings a sense of wonder to his exposition.
Rosemary Mc Bride

Marnie's late mother. Her death led to Ross taking Marnie to Scotland. She has quite the history with the Shoebox Zoo.