This page is for characters appearing primarily in Evil Food Eater Conchita for the Evillious Chronicles.

Click here to see her as the Master of the Graveyard. 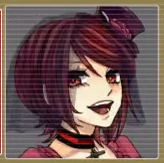 The Villain Protagonist for the "Gluttony" arc of the series, a Duke of Beelzenia that has a very… strange taste for her food. At first only ate the most delicious and exquisite food before she became gravely ill from overeating. After making a deal with the Demon of Gluttony, she became able to eat anything and her taste devolved into cannibalism.

The female of a pair of twin servants that are so twisted that they serve Conchita's bizarre appetite with delight, the smarter but more violent tempered of the two. She is a reincarnation of Gretel, and with her brother Pollo she has been serving Conchita since she was a child.

The male of a pair of twin servants that are so twisted that they serve Conchita's bizarre appetite with delight, the dumber but more mild-mannered of the two. He is a reincarnation of Hansel, and with his sister Arte he has been serving Conchita since he was a child.

"Before long might I be able to take a vacation?"

Banica Conchita's fifteenth chef, whom is later eaten by Banica. In reality he's the third Prince of Marlon, Carlos, who used to be engaged to her. After being captured and held as a political prisoner, he overhears AB-CIR and Platonic discussing Banica, and offers to infiltrate her mansion for them. He has his own song, "Drug of Gold," in answer to Banica's.

"The problem is this mysterious disease afflicting my house."

Banica Conchita’s father and the previous duke of their territory. He accidentally infects himself and the rest of his household with the Gula disease for ten years by serving up a forbidden Baemu pig; eventually, he himself suffers heart failure and dies, though not before being succeeded by his daughter.

Banica Conchita’s mother and a member of the Glassred family. She is cursed along with the rest of the household when she eats the forbidden Baemu and her husband is later forced to kill her.

The Conchita family's head chamberlain and one of the few to survive the mess that was Banica's childhood.

Conchita's fourteenth chef; after serving her for a time, he became disgusted with her appetite and tried to quit, although Banica decided to kill him instead.

A noble from Merigod who escaped from her life of luxury to be a free thief. Employed by AB-CIR to steal the vessels of Gluttony and Envy.

The Empress of Beelzenia, who gives Banica the title of Duke after having stripped it from Muzuri. She later hires Elluka to investigate Banica's apostasy and cannibalism.

The reigning lord of Castle Hedgehog in Lioness during the "Gluttony" arc, AB-CIR works for him. He captures prince Carlos Marlon, unwittingly giving the man the opportunity to make a deal with AB-CIR.

A minstrel who encounters Elluka Clockworker and Platonic on their journey to Banica’s mansion. He later recounts the story of Banica Conchita to many, including his grandson Will.

"Welcome to the Graveyard Restaurant."

The unnamed narrator of the Evil Food Eater Conchita novel, who finally makes her appearance in Judgment of Corruption, a waiter serving at the Graveyard restaurant in the Union State of Evillious. All, or at least most, of Banica's story is her recounting it to an unknown patron as part of the restaurant's gimmick.