This page is for characters appearing primarily in Gift From the Princess Who Brought Sleep and Fifth, Pierrot for the Evillious Chronicles.

The main antagonist for the "Sloth" arc of the series; she's the daughter of the Felix family, her father a doctor. She was arranged to be married to her childhood friend Kaspar Blankenheim, who turns out to be a Gold Digger. Unhappy to be in such condition she tries to escape by sending everyone in the town (and after there’s no one left, herself) into a "deep sleep".

Margarita's father and Toragay's local doctor; although doting on his daughter, he uses her marriage to Caspar as a means to retake the status of the Felix family and is the second victim of her poisoning.

The proprietor of the La Bula Pharmacy in Toragay.

A former midwife and the director of the Charity Institute in Toragay who takes care of the orphans living there, as well as a friend of Margarita's, who often visits the Institute.

The innkeeper of the local inn in Toragay, she’s also the mother of a resident coachman. She regularly allows Hanne to stay at her inn during her investigation.

The son of Toragay's innkeeper, a coachman who often carries Hanne in her many treks between Aceid, Calgaround, and Toragay.

"This isn't the end of this case"
Also see Elluka Clockworker

An investigative reporter for the Shuburke newspaper, she's the protagonist of the Gift from the Princess who Brought Sleep novel. Trying to get a story on the Flower of the Plateau in Merrigod leads her down a path into Toragay's black market, Père Noël, and Margarita's homicidal "Gift-giving." She and her younger sister are the great-granddaughters of Shaw Freezis.

A close friend of Hanne Lorre and the grandson of Shaw Freezis, who is killed in the Lioness Burning Incident.

Shaw Freezis' close aide in the Freezis Foundation and a representative for the organization; he often comes into contact with Hanne Lorre as she makes use of the Foundation's resources.

Hanne Lorre's younger sister and the Investigative Chief of the Yustea International Work Department of the World Police Marlon Headquarters. Initially gets involved while tracking down the kidnapper of her idol, Rin Chan. She and her older sister are the great-granddaughters of Shaw Freezis.

A constable working for the World Police helping to investigate the death of Marquis Blankenheim, as well as the other deaths soon to follow in Toragay. Following the events of the Gift novel, he's promoted to an investigator in the World Police international task-force, Justea, and investigates the Rolled Murders perpetrated by Fifth Pierrot.

Ayn Anchor's grandfather, also named Ein. He was a Netsuma abandoned in the monastery and raised by Clarith. Eventually he became the first Chief of the World Police.

Heidemarie's superior in the International Works Department, who grows exasperated with her questionable crime-solving methods.

An investigator for the international World Police task force, Justea. In the Fifth Pierrot novel he's partnered with Ayn Anchor and helps investigate the Rolled Murders perpetrated by Fifth Pierrot.

The leader of Père Noël and a major character in the Sloth Arc. Also known as "First Santa Claus" by her subordinates and is Lemy Abelard's adoptive mother, enticing him to become Fifth Pierrot after his first murder.

A young boy who was adopted by Julia Abelard (AKA Irina) and the Villain Protagonist of the first half of the Fifth Pierrot novel. Eventually after his adoption he becomes a member of the criminal organization Père Noël as "Fifth Pierrot," serving as the organization's personal assassin. Not too bright and has a penchant for mischief; he is also a reincarnation of Hansel.

The Marquis of Toragay and Margarita's childhood-friend turned husband, although by the time they married he was only using her for her money. A lecherous playboy who frequently cheated on Margarita, he was the first victim of her poison. He was also Second, Dealer in Pere Noel. 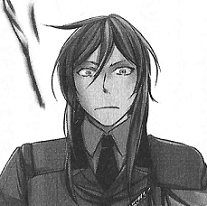 "There are necessary evils one must undertake to right this world."

A lieutenant general of Asmodean and subordinate of Julia Abelard. He's also secretly Sixth Venom, a member of Père Noël who serves as an assassin and clean-up crew for their illicit activities.

Known by her Père Noël codename "Fourth Shadow", she is Julia's faithful apprentice, and an antagonist of the Gift From the Princess Who Brought Sleep novel.

"So, what business do you have here today?"

One of the members of Père Noël as "Seventh Magician," she publicly works as a fortune teller while, secretly, doing "magic tricks" and miracles for her shady clientele by using one of the vessels of sin. First appearing in the bonus story e-mailed to registered users with Gift from the Princess who Brought Sleep, she later shows up in the Fifth Pierrot novel.

Julia Abelard's personal and only servant, also aware of Père Noël and her master's role in the organization. She serves as a maid, assistant, and caregiver for Lemy Abelard while his mother is away on business.

An earl of Calgaround in the Merrigod Plateau; he marries the resident flower girl the "Flower of the Plateau", and lives happily with her, although eventually dies of a mysterious disease; his fate is expanded upon in the Gift from the Princess who Brought Sleep novel.

Mikulia's handler while she worked as a prostitute; eventually, he tracks his former employee down and tells everyone what a lustful woman she was. This ends about as well as expected. 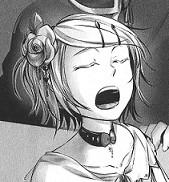 "At first, I was happy. I got a more beautiful face than before and became more and more famous—But it gradually became painful."

A singer in Evillious whose concerts are most popular in Lucifenia, her trademark being to begin concerts with "Now, kneel to me!"; she's kidnapped by Lemy Abelard and held for a time in Calgaround.

A merchant in Lucifenia who's Rin Chan's manager and the manager of the circus Cirque du Lune, adopting Rin Chan out of the orphanage to become a "diva" in Lucifenia. In the Gift from the Princess Who Brought Sleep novel, he's murdered by Lemy while the boy is in the process of kidnapping Rin Chan. The sequel novel revealed, however, that he may have deserved it more than initially thought.

"For example, if I were to put a single drop in that coffee you're drinking now, it would be possible to poison you."

An authority on pharmaceuticals, particularly poisons, residing in Lucifenia. A doctor who examined Marquis Kaspar Blankenheim at his death, he continually lends his expertise to Hanne's investigation into Toragay.

A dim-witted thug who attempts, with his brother, to kidnap Lemy Abelard in the Fifth Pierrot novel and is seemingly thwarted by the previous Fifth Pierrot. He's a descendant of Yarera of the Daughter of Evil series and doesn't differ from his ancestor in any respect.

A dim-witted thug who attempts, with his brother, to kidnap Lemy Abelard in the Fifth Pierrot novel and is seemingly thwarted by the previous Fifth Pierrot. He's a descendant of Yarera of the Daughter of Evil series and takes after his grand-uncle to an alarming extreme.