Characters / The Greed And Wrath Arc

This page is for characters appearing primarily in The Muzzle of Nemesis and Judgment of Corruption for the Evillious Chronicles.

"Now, it's time for the trial"

The Villain Protagonist for the "Greed" arc of the series, a young judge who lost his wife and daughter in accident, but believes his daughter is the Clockworker's Doll. Striving to collect the Sins so he could help his daughter, he makes a Demonic Contract and ends up accepting bribes and struggling over the other Sin Vessels with many oppositions. Serves as the "frontman" for PN, grounding it as a legitimate police force and hiding its darker purpose of espionage.

The chief aide to Gallerian Marlon and secretly the overseer for the PN Espionage Task Force. He originally started out as a slave born in Maistia and bought by the Freezis Foundation, before being freed into the position of Loki Freezis' butler. After a little while though he ended up working for Gallerian.

No. 2 in PN, Hel was a clerk for the USE Dark Star Bureau while also doing the domestic work for the espionage force PN. Her father, Heaven Jakko, was a historian whose research was indirectly responsible for the Witch Hunts carried out in Gallerian's lifetime.

The commander of officers in PN, codenamed No. 3. Through some bizarre circumstance, he's a human who was born in the shape of a golden tiger, although he does not appreciate people thinking he acts like one.

A Netsuma sniper who fled idolization by the Sisters of Clarith, she helps join in Gallerian's efforts to take down the Freezis Conglomerate and is a member of PN, the sniper codenamed No.1. Ends up later being the one to teach Nemesis how to shoot.

Codenamed No.4, Postman is a mysterious member of PN with an affiliation to Ma. They handle all deliveries of the organization, whether it's objects, letters, or people. For some reason they never speak, never demonstrate a will of their own, and don't even appear to age, only following others' orders.

Codenamed No.6, Lich is a "death god" who works for the Demon of Gluttony alongside Eater Sabella, being a former forest spirit that was banished by Held. After Gallerian shuts down the Graveyard Restaurant that he was managing and steals the Glass of Conchita, Lich leads Eater and a horde of undead to come take it back. In the end, the demon of Gluttony partners with Gallerian and Lich is made to work for PN, doing some of its more unsavory work.

Codenamed No.7, Eater is a "death god" who works for the Demon of Gluttony alongside Lich Arklow, being a former forest spirit that followed Lich out when he was banished by Held. After Gallerian shuts down the Graveyard Restaurant that he was working as a chef at and steals the Glass of Conchita, Eater accompanies Lich and a horde of undead to come take it back. In the end, the demon of Gluttony partners with Gallerian and Eater is made to work for PN, doing some of its more unsavory work.

"As long as there's game, you can 'hunt' anywhere."

Gallerian's childhood friend, Mira's boyfriend when the three were younger, and a member of the Freezis family, he initially also seeks to be the top judge in the Dark Star courthouse. Ultimately he ends up losing both his coveted position and his girlfriend to Gallerian.

Gallerian's daughter, who is killed in a freak incident where an enlarged ziz tiama attacks her and her mother's ship.

At the beginning of the story known as Mira Yarera, part of the prominent Yarera Zusco Conglomerate. She is a friend of Gallerian and Loki's girlfriend, but she would end up marrying the former and having a daughter with him.

"Money is the best lawyer in hell."

The original head of the Dark Star Courthouse, a former friend of Gallerian's father Gandalf and the one who sentenced Elluka to death in her witch trial. His allegiances are uncertain, but one thing is clear—his judgment is decided by money.

Mira's older brother, and the co (later only) head of the Yarera Zusco Conglomerate. He first crosses paths with Gallerian in order to aid him with bribing Hanma for a trial, and later becomes instrumental in the construction of PN. A dubious ally who never does his own dirty work but is certainly not averse to having it carried out for him.

"I was saved thanks to you"

A criminal from the "Judgment of Corruption Side Story" manga, a wealthy socialite who pays Gallerian to exonerate him after assaulting a woman. Despite being warned off women for the future, he can't help himself and continues to cause trouble.

Scherzer's financial manager, appearing in the "Judgment of Corruption Side Story" manga. Following Scherzer's acquittal, he meets with Gallerian over some new evidence of his crimes. 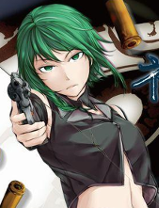 The Villain Protagonist of the "Wrath" arc. Raised by her mother in relative isolation, she later became a ruthless assassin for her master, First Santa Claus/Mr. Père Noël. She becomes wracked with grief after killing her lover by said master's orders. Failing to commit suicide, she instead decides to seek out her revenge. 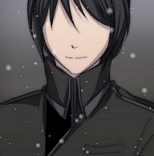 Gammon Octo's brother and a second lieutenant in the Union State of Evillious army. He's also Nemesis' lover of over a year; after being convicted of murder by Gallerian, he escapes from his imprisonment but is then killed by his love on the orders of her master.

A boy who was sealed in Lunaca Labora long ago. Nemesis revives him and, based on his powers, creates the Fantastic Nuke Punishment.

Alternative Title(s): The Muzzle Of Nemesis, Judgment Of Corruption