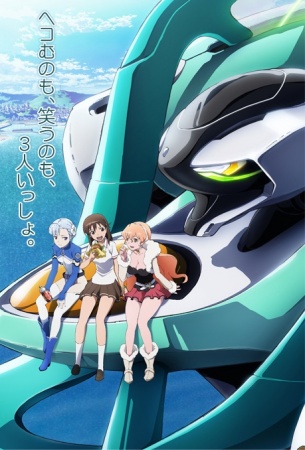 Madoka Kyouno is the sole member of the Jersey Club and always ready to help others out. One day, she is approached by an alien from their home planet Le Graite named Lan who asks her to pilot a robotic aircraft (called a Vox Unit) to defend mankind against an evil force. Eventually, they meet a third girl, Muginami, who also joins the club. Together, they work with the organization of Nuvomundos to battle against the invaders known as Kiss, led by Lord Villagulio from the planet De Metrio, who aims to capture the Vox Units so that he can destroy the Polyhedron Federation and their planet Le Garite. Thus begins a surprisingly morally ambiguous story despite having a highly idealistic protagonist and an overall lighthearted tone.

Lagrange: The Flower of Rin-ne (輪廻のラグランジェ Flower declaration of your heart, Rinne no Raguranje) is an anime that started airing in January 2012. The Second season began airing in July 2012. The anime is being produced by Xebec and directed by Toshimasa Suzuki. The anime has been licensed for streaming in North America by Viz Media.

In addition to a manga adaptation, there is also a Prequel manga entitled Lagrange: The Flower of Rin-ne ~Dawn of Memoria~(輪廻のラグランジェ 〜暁月のメモリア〜, Rinne no Raguranje ~Akatsuki no Memoria~). Oddly, it was released before the original anime premiered.

Not to be confused with (Kyoukai no) RIN-NE.