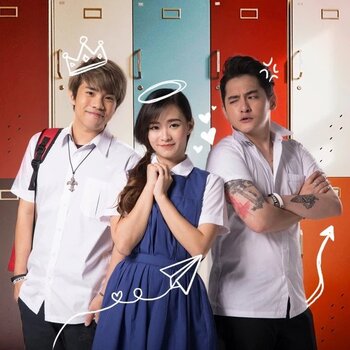 Class T1T5 (alternatively called The Titan Academy), is an ongoing web series made in 2018 by Singaporean YouTuber JianHao Tan, who started as a normal YouTuber in 2010 until he exploded in popularity and managed to create his own company called Titan Digital Media, using this series to become the top content creator of Singapore.

The premise is pretty simple: JianHao would describe the types of people that could be found during certain times at school within Singapore, in which several students would act as those stereotypes, often to hilarious effects. However, since he's using a more consistent group of friends, a recurring cast of characters began to form and the series evolved from a plot-less slice of life story into a slice of life story with a more consistent continuity.

The series takes place in the fictional school of Titan Academy in Singapore, where JianHao Tan's character, also named JianHao Tan, is the rebellious rich kid enrolled in the school and a student of the titular Class T1T5, dubbed as "the worst class in existence" that seems to get worse and worse... with the sole exception of the star student, the overly studious genius Denise. The series follows the misadventures of JianHao with his group of friends, consistently consisting of the aforementioned Denise, self-proclaimed "cool kid" Vincent, nerdy bookworm Ren Yi Xiang, chubby emotional Kevin, awkward and nerdy girl Debbie, his (possibly twin) sister Nicole and many more; as they encounter various school hijinks, archetypical characters, varying types of teachers, daily life of teenagers and most importantly and the most dreaded...exams (everyone is worried as heck to just pass, while Denise is concerned on getting perfect scores).

Eventually, Class T1T5 also got a junior class enrolling, dubbed as Class N4T1, with its own cast of characters and varying personalities. There's also a short film titled I Am A Teacher, which chronicled the tales of the former Class T1T5 Sadist Teacher Madam Soot Beng after a certain difficulty affected her career.

JianHao Tan's channel, and consequently, most of Class T1T5 can be found here