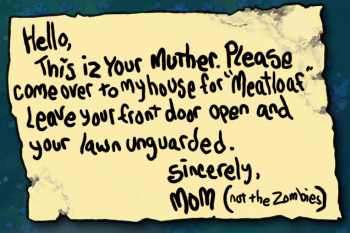 Seems legit.
This is what happens when a character tricks another character by writing a letter and signing it under a different name. Sometimes, the real writer's own handwriting was recognized, making the letter a big lie to the reader.
Advertisement:

In more recent media, it may take the form of an e-mail or text message.

These can be used in a Batman Gambit, as they are usually written with the expectation that the recipient will react in a certain way. Quite often they can be used to lure someone into a trap. Other times they may be used to arrange meetings between people by a third party. They may also be used by well-meaning people in a Feud Episode to end a fight between others by sending a letter of apology on their behalf. How successful this can be varies.

Alternatively, this can be Played for Laughs with a message faked so ineptly that only a complete idiot would fall for it (though it may succeed if the recipient is indeed a complete idiot).

This can overlap with Impeded Communication.