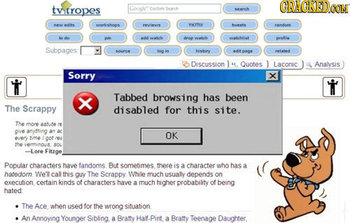 Browser Narcotic websites are any one that results in you opening a dozen tabs in a single session and using up hours of your time. An example of such is This Very Wiki. Ending up on a Wiki Walk is common at such sites, but not universal. The trope name comes courtesy of xkcd's alt-text on this comic.

Compare Archive Binge, which is linear in nature and does not require opening dozens of tabs.