Literature / The Silence of the Lambs
aka: Silence Of The Lambs 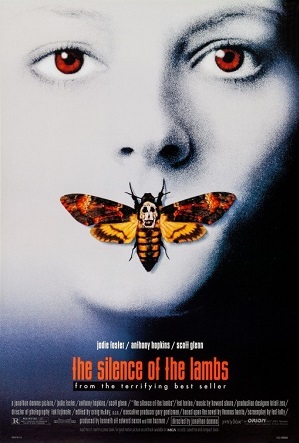 To enter the mind of a killer, she must challenge the mind of a madman.
Dr. Lecter: What does he do, this man you seek?
Agent Starling: He kills women.
Dr. Lecter: No. That is incidental. What is the first and principal thing he does, what needs does he serve by killing?
Advertisement:

The Silence of the Lambs is a 1988 novel by Thomas Harris (Black Sunday), and the second after Red Dragon in the Hannibal Lecter series. Notably, unlike later sequels in the series, this book is somewhat self-contained (for one, Will Graham doesn't reappear and is only briefly mentioned in an expository narration), and the reader does not need to be familiar with the events of Red Dragon in order to understand this novel.

There's a serial killer on the loose, "Buffalo Bill," who abducts women, kills and skins them, and shoves chrysalitic moths down their throats. Behavioral Sciences, the section of the FBI that deals with violent crime, is stuck; section chief Jack Crawford has no idea how to stop this guy. The game-changer comes in the form of ambitious young trainee Clarice Starling. Pulled into the investigation almost by accident, she is sent to interview another serial killer, incarcerated psychiatrist Hannibal Lecter— "Hannibal the Cannibal"— for insight into Buffalo Bill's psychosis. Having previously aided longtime adversary Will Graham in hunting down serial killer Francis Dolarhyde, Lecter agrees to fulfill a similar purpose for Clarice in exchange for her most traumatic memories, and the two develop a strange symbiotic relationship. And the clock is ticking, because Buffalo Bill's latest victim is the daughter of a US Senator, and if they can't get him now, all hell will break loose...

The book was adapted into a 1991 film directed by Jonathan Demme, starring Jodie Foster as Clarice and Anthony Hopkins as Lecter, followed by a sequel Hannibal (1999) and a prequel Hannibal Rising (2006). Like the book, the film adaptation of The Silence of the Lambs is self-contained, and features even less references to both Red Dragon and its 1986 film adaptation, Manhunter (though a number of visual motifs from that movie carry over here), to say nothing of this movie recasting every role that had previously appeared in its predecessor (in part because Brian Cox wasn't available to return as Lecter, with the rest of the Manhunter cast never being approached afterwards). A sequel series to the film, titled Clarice, premiered in February 2021 on CBS.

The tropes, Clarice, tell me about the tropes...