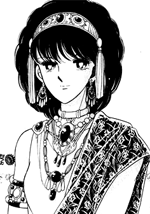 Yuri was a Japanese highschool student and led a normal life, until she began to notice the strange phenomenon of water attempting to suck her into a whirlpool. She does her best to avoid being in contact with water anymore than necessary, but ends up pulled through a puddle and finds herself in the Hittite Empire of ancient Turkey.

She learns that she was summoned by Queen Nakia, the current queen and Tawannana of the Empire, who plans to make her a human sacrifice to place a curse on most of the princes, so she can place her own son as the next ruling king. Fortunately, her plan ended up thwarted by Yuri coming into contact with Kail, who ends up promising to protect her from the queen and get her home.

Kail claims Yuri to have been sent by the gods, calling her an incarnation of the Goddess of Love and War, Ishtar, to ensure that she'll be permitted to join him during battles. Yuri does prove to bring fortune to the Hittites on the battlefield, and becomes a symbol and worshipped by the citizens of the Empire, leading to her being called Yuri Ishtar.

The Royal Family of Hattusa

First Chief of Archers, then promoted to be Yuri's Deputy Commander-in-Chief.
Kash