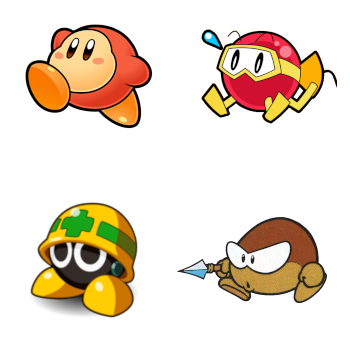 Clockwise from top left:
A Waddle Dee, a Pooka, a Pirate Goom, and a Met/Metool/Mettall/Mettaur.
First you draw a circle
Then you dot the eyes
Add a great big smile
And presto! It's Kirby!
— Kirby's Adventure intro
Advertisement:

There are a large number of video game enemies and creatures which physically resemble giant heads with eyes and feet. These bizarre creatures are commonly The Goomba in their respective games and may become associated with their franchise if they appear in multiple installments.

Where or what these strange creatures' internal organs are is a mystery. The most they have with regards to other limbs are stretchy, stubby stumps or flippers in place of arms or hands. Otherwise, expect them to lift and manipulate objects, if they must, with Invisible Anatomy. Occasionally they lack any arms or legs at all having to bounce or roll to get from place to place.

The reason for this is partly because it's cute but mostly because of practicality; back in the 8-bit era, most video game sprites had to fit in 16 x 16 squares. The easiest way to design a recognizable yet harmless-looking character with that many pixels is to just draw a big-eyed face, and put feet on the bottom to justify its ability to walk.

Although most commonly associated with enemy creatures Player Character examples are certainly not unheard of; again, due to system constraints an easy way to design a recognizable character in low resolution is to make their head as big as possible with this trope being the logical conclusion.

A subtrope of Cephalothorax, Cartoon Creature, and Our Monsters Are Weird. See also Super-Deformed. The exact opposite is Tiny-Headed Behemoth.