The Plan
aka: Plan 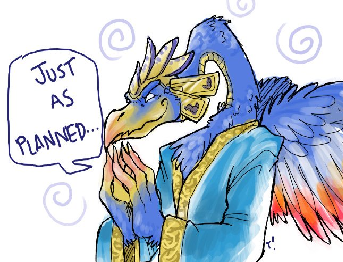 It doesn't matter what he's referring to, it's still true. Until it isn't.
Count Geoffry: Well, what is it? Spit it out!
Evil Knight #3: Well, that was only the end of a plan...
Evil Knight #1: What about the middle bits?
Evil Knight #2: You know, where you tell us how we're going to win the tournament.
Count Geoffry: [eye twitch]
— Blazing Dragons episode 3, Tournament Day
Advertisement:

In nearly every work, you have a Plot. Frequently, a plan will guide the plot, often an Evil Plan, hatched by the villain. Some plans are complex, with so many unforeseen events acting in concert, making it a Gambit Roulette. Other characters try to stick with A Simple Plan, which always gets more complicated. If the character doesn't plan ahead, it's an Indy Ploy. If you can't figure out what subtrope a character's plan belongs to, just Pot Hole it here.

This is a subtrope of Battle of Wits. Also, Gambit Index covers everything about The Plan, such as who plans and who foils the plan, how the plan is revealed, and what is done after it works. This index covers only the plans themselves, and is divided into two categories— Types of Plans; how the scheme will work, and Specific Plans; what the scheme will accomplish. If it would fit in both, it goes in Specific Plans.