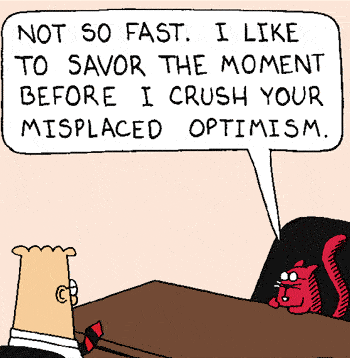 "I needed someone who acts like a friend but secretly delights in the misery of all people."
"I've adopted a strategy of pleasantness. It turns out that one can perpetrate all manner of heinous villainy under a cloak of courtesy and good cheer. It seems a man will forfeit all sensible self-interest if he finds you affable enough to share your company over a flagon of ale."
— Edmund, Fool
Advertisement:

A villain whose politeness is an act that only serves to enhance their evil. Unlike Affably Evil characters, whose niceness is genuine despite their malice, these villains adopt this pleasant persona and are genuinely mean people. They lack a villainous demeanor, yet they are truly, wholly, and unrepentantly evil regardless. This kind of villain maintains a friendly, courteous mask even as they commit incredibly heinous and horrific acts. An Affably Evil villain will treat The Hero like a friend, genuinely regret having to fight them, and seriously try to win them over. A Faux Affably Evil villain will say, "You know, I always look forward to our little meetings" while gruesomely torturing them for fun.

At heart, they're utterly soulless, but they mask it with a pleasant, polite, "normal" attitude, perhaps because they have social standards to live up to or because their pleasantness reflects their sheer enjoyment of evil. Maybe it's a sign of their severely warped morality, or a form of deception or psychological warfare. Or maybe they're just unbearably full of themselves. It's anyone's guess what this kind of villain will do if they suffer a Villainous Breakdown; maybe they will drop all pretenses and find that they are Not so Above It All or maybe they will fall into a state of Dissonant Serenity, blabbering off-kilter pseudo-mannerisms as they lapse into their final and greatest puppy-murdering spree.

Do not confuse with Laughably Evil, which is a villain who is funny rather than polite. While many Faux Affably Evil villains are also Laughably Evil, many other villains are one but not the other. Compare and contrast Affably Evil (whose niceness is sincere) and this Trope's opposite, Noble Demon (whose demeanor is evil in contrast to their actions). For the Evulz is a common motivation, though using this trope as a form of Obfuscating Stupidity is also possible. Also see its (possibly) downplayed counterpart Bitch in Sheep's Clothing, where a Jerkass at the best of times, is hiding behind a Nice Guy facade in order to trick people and doesn't necessarily keep it after showing his real face, and Stepford Smiler, when a miserable and/or mentally unstable person is hiding behind a cheery and sweet facade. May also overlap with Bantering Baddie Buddies, Soft-Spoken Sadist, Sugary Malice, Wise Old Folk Façade. This trope may also be a fan of Confound Them with Kindness.

Contrast with Good Is Not Nice, which is a good character that just isn't polite. Not to be confused with Wicked Cultured, where a cultured façade hides unpleasant behavior. This trope is also one of the defining traits of a sociopath.

Nigel, the main antagonist of the movie Rio fits this trope very well. He rarely outright insults someone, and tends to talk in a calm, friendly manner...while relishing in his villainy and ''convincing'' Mauro and his Marmoset minions to help him find Blu and Jewel by dropping him from several hundred feet as show in this video.

Nigel, the main antagonist of the movie Rio fits this trope very well. He rarely outright insults someone, and tends to talk in a calm, friendly manner...while relishing in his villainy and ''convincing'' Mauro and his Marmoset minions to help him find Blu and Jewel by dropping him from several hundred feet as show in this video.