Always Someone Better
aka: The Minnesota Fats 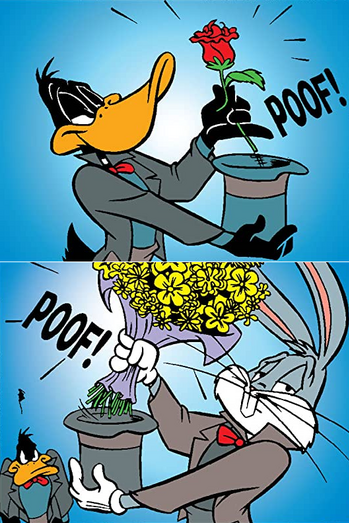 "Smile like you've got nothing to prove
No matter what you might do
There's always someone out there cooler than you"
— Ben Folds, "There's Always Someone Cooler Than You"
Advertisement:

The character who is the best-of-the-best comes across someone even better than them; someone more powerful than the Super Hero, or more skilled than the Ninja, or smarter than The Professor, or richer and more important than the rich important guy, or a better banjo player than the master banjo player, etc.

It's not uncommon for the characters to be siblings, not unlike the Aloof Big Brother — e.g. Sam Malone's brother was more popular than him, Adrian Monk's brother was better at deduction. Sometimes one will be wealthier than the other. The classic better sibling is, of course, Mycroft Holmes, better known as "Sherlock Holmes' smarter older brother".

By the end of the story, one of three things has usually happened: the regular character has been totally humiliated trying to beat the other character; they have grown up and realized that they just don't need to be the best, and become happy being second best; or have bested their superior. The most common ways for besting them in action shows is by outwitting or tricking them, finding their Achilles' Heel, using a Forgotten Superweapon, getting into an Unstoppable Rage, or just a good old-fashioned David Versus Goliath confrontation. Sometimes, the character just has to get over their mental block/self-esteem issue, which was the problem all along.

This is generally just a one-shot character, but in continuing, action-oriented shows, this character can sometimes turn into a recurring villain or Big Bad with whom the Hero develops a rivalry. In many cases, the rivalry is entirely one-sided — either the rival doesn't know that their challenger exists or (much to the mortification and fury of the Hero) likes the Hero and considers them a friend, and thus doesn't enjoy competing with them; there may even be something the Hero possesses which the rival character envies.

In other situations, the better character is a Jerkass who just loves to lord their superiority over the Hero. In more cynical works, they will generally get away with their gloating, often to show life isn't always fair and not all success stories are karmic ones, though in other cases their Smug Snake qualities will lead to the Hero one-upping them for a change. Generally these will only be small time victories however, otherwise it will be hard to remain this trope as the status quo without a lot of Offscreen Villainy.

Sometimes overlaps with The Ace. In a Monster Protection Racket, a character can seem this way before they're revealed. See also Anything You Can Do, I Can Do Better, Always Second Best, Overshadowed by Awesome, Second Place Is for Losers, The B Grade, That One Player, and Always a Bigger Fish.

After so many years, Darth Vader faces Obi-Wan Kenobi again... and gets easily defeated by him.

After so many years, Darth Vader faces Obi-Wan Kenobi again... and gets easily defeated by him.