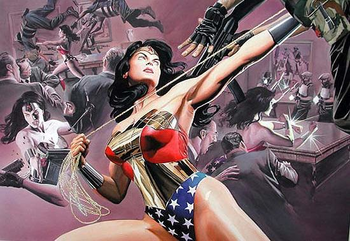 "Of all people, you know who I am… Who the world needs me to be. I’m Wonder Woman."
"Not even girls want to be girls so long as our feminine archetype lacks force, strength, and power. Not wanting to be girls, they don't want to be tender, submissive, peace-loving as good women are. Women's strong qualities have become despised because of their weakness. The obvious remedy is to create a feminine character with all the strength of Superman plus all the allure of a good and beautiful woman."
— William Moulton Marston, 1943

The Amazing Amazon. The Spirit of Truth. The Princess and Diplomat of Paradise Island/Themyscira.

The Heart of The DCU.

The first prominent female superhero in the history of comic books, and generally considered the greatest of the superheroines, was created in the 1940s. Wonder Woman is distinguished by her indestructible bracelets, which deflect bullets, and her enchanted lasso, which compels men to tell the truth and puts animals to sleep.

She was created in 1941 by psychologist William Moulton Marston (then an educational consultant to DC Comics) along with his wife Elizabeth Holloway Marston, as a deliberate counterpoint to the all-male stable of "Übermenschen" published by DC at the time. Marston was remarkably free of the era's usual prejudices about and disdain for women, and intentionally designed the character to embody his image of an idealized strong, unconventional and independent woman. The character first appeared in All-Star Comics #8 (December, 1941).

. Marston's writing is still hotly debated in fandom spaces; some people criticize his work as appealing to fetishes, others characterize this as a gross oversimplification.

He also had very unconventional views on how the world should be run for the time he lived in, believing a Matriarchy would be superior to the male-dominated world of the 1940s. This was the basis for Paradise Island.

Due to the deal Marston struck with DC, for a long time (at least through 1986), DC had to publish at least four issues of Wonder Woman each year or lose the rights to the character. This may have been one of the reasons that she was one of the few superheroes who continued publishing during The Interregnum, along with Superman, Batman and a handful of others. Her longevity is certainly one reason that contributed to her being one of DC's "Big Three" — as Frank Miller described it — Wonder Woman, Superman and Batman, are all the "gods" of the DC Universe, and the rest are all "just" heroes (something that is taken to its logical extreme in the Kurt Busiek/Mark Bagley year-long series Trinity). Also playing a big role: her 1970s TV series with Lynda Carter and her visibility in the Super Friends cartoon, as noted below.

Originally, Wonder Woman's powers were relatively limited, compared with her contemporaries. She was strong, but not as strong as Superman. She was fast, but not as fast as The Flash. She couldn't fly, but she could "glide on air currents". Most of her powers were gadget-based; the bullet-deflecting bracelets, the Lasso of Truth, the invisible jet. The Silver Age version of the character was stated as having the Strength of Hercules and the Speed of Hermes, deities who were shown to be a match for Superman and Flash, respectively, in other series. Wonder Woman herself battled Superman to a standstill in the tabloid-sized special comic "Superman versus Wonder Woman".

The bosomy note like Power Girl, exactly how bosomy depended on the artist - by the 1990s she became positively Stripperific, raven-haired Amazon heroine was never as well-known by the general public as the other "big heroes" until the 1970s, thanks to Shannon Farnon, her voice actress on Super Friends, and Lynda Carter, who portrayed her in prime time. In addition, feminists loved her, as evidenced by her being on the cover of the premiere issue of the movement's flagship magazine, Ms.

At the same time, however, Wonder Woman was undergoing a Retool; with the popularity of shows like The Avengers, and its visions of strong Action Girls, she lost her powers, took up martial arts under inscrutable old Oriental guy I Ching, and became Undercover Agent Diana Prince. Ironically, this period was mostly ended by the above feminists, such as Gloria Steinem, who protested the depowering of a strong female character (the aforementioned Ms. cover was the vanguard of this). Plus, the stories themselves were generally considered below-par and no longer relevant with The Avengers having ended. As a result, Diana was repowered and rejoined the Justice League, and the whole episode is considered a Dork Age, though it is referenced from time to time.

Later, she was revamped for Crisis on Infinite Earths by the comics legend George Pérez. She was powered-up, giving her flight, and tying her much more to Greek mythology and a mission as a messenger of peace to "Patriarch's World". Furthermore, she considered a Secret Identity obviously counterproductive in that role, so she stayed with her new friends, Julia Kapatelis, a classical Greek scholar, and her daughter Vanessa. Furthermore, Steve Trevor was revised to be old enough to be Diana's father, thus precluding the cliché romance; instead, he romanced Etta Candy. However, it turns out that he is indirectly linked to Diana's home since his mother, Diana Trevor, crash landed there and died helping the Amazons defeat a monster, making her a deeply honored hero to them.note It was also Perez's way of explaining why Wonder Woman's outfit was an American motif - they assumed Diana's insignia was her standard, and emulated them.

In addition, she was simultaneously made much more naïve and tougher. The naïveté is such that Wonder Woman could not conceive of a woman being an enemy, which made the time when the Cheetah tried to con her out of her lasso an extremely upsetting moment. The toughness comes from being a classically trained warrior who is ready to kill as necessary and with no regrets, such as when she decapitated the villainous god Deimos. At the same time, her supervillain enemies became much more credible threats as in how the Cheetah was changed from a normal woman in a silly cheetah suit to a villain who became a powerful and deadly were-cheetah who is a real challenge to Diana in battle.

A popular (and therefore cheapened) way to escalate the drama in Wonder Woman stories (or Crisis Crossovers) recently has been to threaten Paradise Island... and then make good on the threat. The Amazons have been all-but-destroyed by Darkseid, themselves (in two civil wars), Imperiex, Hera, OMACs, Granny Goodness in the wake of Amazons Attack!, and in Alternate Universe by the removal of the gods' protection.

In the mid-2000s run written by Greg Rucka, she suffered from a negative reaction in-universe, between escalating her role as emissary, leading to accusations of forcing her beliefs on people, and snapping the neck of a villain who had telepathic control of Superman because she felt it was the only way to stop him. In the middle of all this, she fought shadowy corporate schemers, resurrected Gorgons, participated in the hostile takeover of Olympus by her patron, Pallas Athena, and faced the destruction of her home by OMACs (the whole OMAC's storyline, as well as much of the universe-changing crises that ultimately led to the "New 52" continuity reboot, can be seen as indirectly resulting from the killing). There was some delight at Wondy's appearance in Manhunter, when she enlisted Kate Spencer's services as a lawyer during her trial for the killing which occurred during Rucka's run.

After Rucka's run and the OMAC crossover event, Wonder Woman regained (or rather gained for the first time in this continuity) her Diana Prince: Secret Agent identity in order to connect with people. Many fans were not pleased, although others noted that it was very much a shout out to the Lynda Carter series which cast Diana as a spy. Soon after, she reluctantly got involved in a war between the Amazons (along with her newly resurrected mother) and Patriarch's World.

In the late 2000s, Wonder Woman's series was in the hands of Gail Simone. Her supporting cast was revisited and she went up against a series of monsters including the ultrapowerful Genocide, her mother's former bodyguards, a grief-stricken Green Lantern, her own pantheon, and some long-lost family members who were abducted by a vicious alien race. The tales were epic, twisty and generally well received, and Gail's deep love for the character is evident.

However, she was not the first woman to write the comic, as has sometimes been claimed. That distinction goes to William Moulton Marston's assistant, Joye Hummel Murchison Kelly, who became increasingly involved in the plotting and writing of scripts during the 1940s as Marston's health declined. Ultimately she scripted many Wonder Woman stories on her own under the "Charles Moulton" pseudonym. Other women to write on the comic have included Dann Thomas (who cowrote Wonder Woman #300 in 1983, making her the title's first credited female writer), Mindy Newell in the 80s and 90s, and Jodi Picoult in 2007.

Sales on the book continued to drop, so when Wondy's 600th overall issue (and a renumbering of the current series to reflect that) came around, J. Michael Straczynski shook things up.

In his year-long storyline "The Odyssey" (completed by Phil Hester), the gods went back in time to remove their protection from the Amazons. As a result, Paradise Island fell when Diana was a little girl, and a handful of Amazons smuggled her out and raised her on the streets of Man's World. During the story, Diana struggles to regain her powers and understand why the world seems disastrously wrong around her.

After "The Odyssey" ended, Brian Azzarello and Cliff Chiang took over the title and relaunched as part of DC's New 52 reboot. Their run on the book shoots for a much darker and more horror-influenced tone than previous runs. Wonder Woman once again sports a new costume, though it is much closer to the original than the suit from the JMS run. Azzarello and Chiang's ongoing work has met with both critical acclaim and controversy for their handling of the mythical and gender themes of Wonder Woman's world. Like Greg Rucka's run, Azzarello and Chiang approach Wonder Woman's world through the myths of the Greek gods, though the difference between the two approaches is quite clear. Additionally, in 2014, she started headlining a relaunch of Sensation Comics, meaning that, alongside Action Comics and Detective Comics, each member of DC's Trinity had their own "X Comics" series running alongside their solo book until Sensation was cancelled with issue #17.

As part of the DC Rebirth initiative, Greg Rucka returned to write Wonder Woman (Rebirth). His run attracted notice for being the first in the main DC continuity to depict Diana as in a relationship with another woman.note This writing decision was partly the result of Rucka seeing the character as representative of universal love for all humanity, regardless of gender, and partly because he thought it was the most logical explanation for how Diana could seemingly know all about love, sex, relationships, and marriage despite growing up on an island populated entirely by women. Also, for the first time in three decades, Diana and Steve Trevor are officially a couple in mainstream continuity again.

In 2016, Grant Morrison released a Graphic Novel centered around Wonder Woman set in the Earth One continuity, naturally titled as Wonder Woman: Earth One.

The 2017 biopic Professor Marston and the Wonder Women is based on the lives of William Moulton Marston, his wife Elizabeth Holloway Marston, and their domestic partner Olive Byrne, the people who created and inspired her.

Needless to say, the cheesy 1973 grindhouse film Wonder Women has nothing to do with the superheroine, but we wish it did.

Tropes associated with Wonder Woman include: