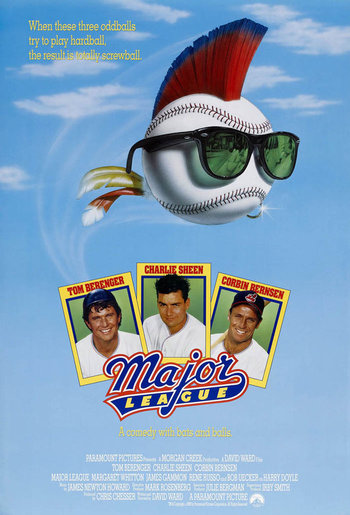 Lou Brown: She put this team together because she thought we'd be bad enough to finish dead last, knocking attendance down to the point she could move the team to Miami and get rid of all of us for better personnel.[...] After this season, you'll be sent back to the minors or given your outright release.
Jake Taylor: Well, I guess there's only one thing left to do.
Roger Dorn: What's that?
Jake Taylor: Win the whole. Fucking. Thing.
Advertisement:

A 1989 comedy, written and directed by David S. Ward, about a Ragtag Bunch of Misfits.

In this case, the misfits in question are the Cleveland Indians, a baseball team that hadn't made a playoff appearance in over 30 years and is arguably the most moribund franchise in the majors (which at the time was Truth in Television). After the sudden death of the team's elderly owner, ownership of the team has passed to his much younger wife, Rachel Phelps (Margaret Whitton), a Rich Bitch and Corrupt Corporate Executive. Despising both the dreary city of Cleveland and the terrible reputation of the team, Phelps dreams of moving the team to a sunnier, more glamorous location... and it turns out that she can make this dream come true, as a clause in team's contract with the city states that if attendance falls low enough she will have the right to unilaterally move the team.

To accomplish this goal, she assembles the sorriest bunch of ballplayers she can find. This includes aging, past their best veterans like catcher Jake Taylor (Tom Berenger) whose knees and career are hanging by a thread, former star Roger Dorn (Corbin Bernsen), who now pays much more attention to managing his investments than to baseball, and Eddie Harris (Chelcie Ross), a pitcher who doesn't have much life left in his arm but makes up for it with a combination of cunning and various thoroughly illegal tricks and substances that he uses to give a little extra juice to his pitches. The veterans are joined by off-the-street rookies with no experience or reputation like hot-headed, ex-con pitcher Rick Vaughn (Charlie Sheen), who has serious control issues with both his pitches and his personal life, and the voodoo-practicing slugger Pedro Cerrano (Dennis Haysbert), who can't hit a curveball to save his life. Lastly there's the brash and fast Willie Mays Hayes (Wesley Snipes), who just sort of shows up at the team's training camp despite not being invited and wows the staff enough to earn a spot. All of the above players wind up under the gruff but caring guidance of manager Lou Brown (James Gammon), a coach who has spent his entire career in the minor league system and has never coached a game at the major league level.

With the local fans in Cleveland disgusted by the inept team who they don't know and have no connection to, Phelps seems to be well on her way to succeeding her plan. However, as the team spends the season navigating personal issues, in-house rivalries, and the glaring holes in their game, they begin to slowly come together and start outperforming expectations. And when the team finds out about Rachel Phelps's scheme, they can think of no better way to spite their boss than to do the unthinkable and win the pennant no matter how many obstacles she throws in their way.

The film was a critical and commercial success, with many of its memorable quotes worming its way into the baseball lexicon ("Juuuust a bit outside!"). Longtime baseball man Bob Uecker, an announcer for the Milwaukee Brewers who was also an actor and played the Indians' snarky play-by-play man Harry Doyle, became a truly iconic, humorous figure within the sport in large part to this movie. The Indians' fanbase (along with the rest of Major League Baseball) embraced it as the best thing to happen to the franchise in decades, and was a precursor to their winning ways in the 1990s, while the film popularized Rick Vaughn's climactic Power Walk out of the bullpen to a now-common practice in MLB.

The success spawned a Lighter and Softer sequel in 1994, Major League II, which brought back most of the cast in one capacity or another, sans now-a-superstar Snipes, with Omar Epps replacing him in the role. Several new characters — naive farmboy Rube Baker, Japanese import Isuro "Taka" Tanaka, and arrogant superstar Jack Parkman (who is briefly a teammate but is swiftly traded and becomes a bitter rival to the team) — entered the fold, while the plot deals with the team letting the success of the previous year go to their heads and having to find their way back to their winning ways once more and take care of unfinished business.

Major League II faltered with critics and at the box office, but another sequel, Major League: Back to the Minors, was released in 1998. Minors switches the franchise from the Indians to the Minnesota Twins and follows their (fictional) AAA team, the Buzz. The main character of the film is player-turned-manager Gus Cantrell (Scott Bakula), who tries to fix the various issues within his team while settling an old score with the manager of the Twins, Leonard Huff (Ted McGinley, signifying that the series was Jumping the Shark). Some old faces also returned in Cerrano, Baker, Taka, Dorn (now the Twins owner), and Harry Doyle, but the movie was a massive bomb, setting a then-record for the worst opening weekend ever for a film opening in over 2,000 screens. A fourth film has languished in Development Hell ever since, but the original film is still regarded in most circles as a sports-film classic.

Tropes found in the first film: