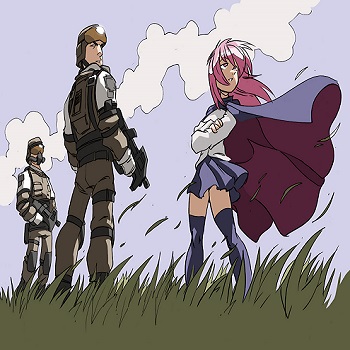 Zulu Squad: final solution to any and all problems of the Damned 33rd...or Tristain.
"A man cannot become a hero until he can see the root of his own downfall."
-Aristotle
Advertisement:

So what would happen if you took an enemy Mook from a military TPS, and put him in an anime world full of Fanservice, cute witches, Tsundere and Squee? You get a Spec Ops: The Line/The Familiar of Zero crossover!

Sgt. Crosby, leader of Zulu Squad, was trying to stop the two deranged Delta Force soldiers from killing the last remnants of the Damned 33rd at The Bridge in Dubai, when suddenly he is summoned to a bizarre world of magic and familiars. With the help of a supernatural mentor he embarks on a Redemption Quest to become the hero. And deal with bratty teenagers who possess magical abilities.

A prequel called 'Of Princesses, Privates, and Dragons' (read it here.

) was released shortly after ZSNT was completed in December of 2019. Tropes concerning OPPD will be outlined here in a separate section.