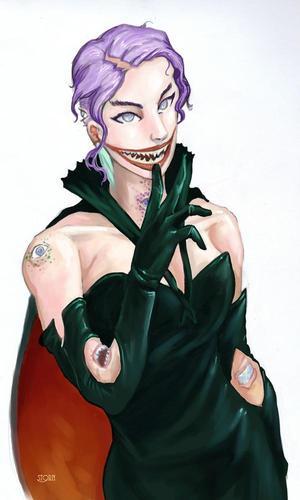 Freakshow, as drawn by Storn Cook, commissioned by Cheiromancer.

is a crossover fanfic between the crapsack superhero world of Worm and a Dungeons & Dragons character dropped in the mix.

. In short, a summoner of eldritch abominations, who is something of an eldritch abomination herself, and whose summons (along with being terrifyingly weird and distorted monsters) have their own rather useful spells (like walls of stone/ice/wind, fly, wind walk, true seeing, obscuring mist, major creation, etc), all day, forever. Up to four summons at a time, each lasting 84 seconds, summoned every 24 seconds. A constantly rotating menagerie of Trump-rated aberrations.

She immediately falls in with the Merchants and starts producing drugs.

It goes downhill from there.