Tooth and Tail has four main characters that serve as commanders of their respective armies. Although each character has a distinct theme and background music, each one plays identically, and can recruit any animal to their cause when doing multiplayer games. In the campaign however, they have distinct armies and hubs, and as such have more personality to go off of. 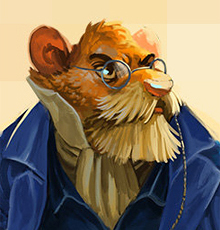 "Who decides the fate of animals?"

"Nothing stops determined capital!"
The aristocratic leader of the Longcoats, his blue-clad forces seek to overthrow the Harvest system and replace it with a capitalist meritocracy. 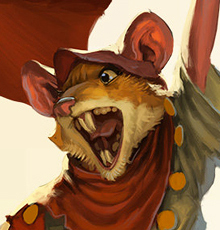 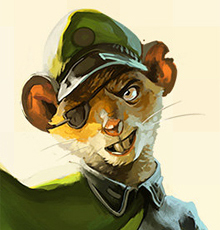 "Rule #1: Conflict is inevitable."
"Battles are not won by chance."
The iron-fisted leader of the KSR who in the power-vacuum left by the death of the Czarina opted to continue fighting for order. 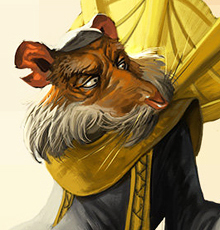 "What delicacies await?"
"We will be in ascendance again..."
Charismatic preacher of the Civilized, who ran the lottery systems for the Harvest before the War.

The worker unit that tends the farms, and then becomes the food that feeds the army.

Nomads of the North (Lizards)

Tier 1 tank unit, bashes down fortifications with their hammers.

Tier 2 melee unit, stealthily sneaks up to their foes before bashing them with their clubs.

Tier 2 ranged unit. Flies around with a machine gun.

Tier 3 ranged unit. Lugs a powerful minigun that can mow down an army after a short rev-up time.

Tier 3 melee unit, sets the battlefield alight with his flamethrower.

Tier 3 buffer unit. Exhorts his comrades to attack faster and to speed up friendly unit creation.