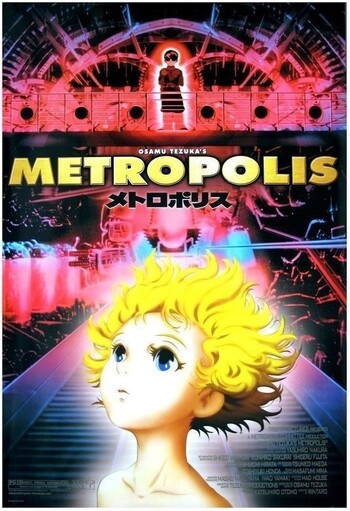 I can't stop loving you...
Advertisement:

The 2001 Animated film by Tristar Pictures, directed by Rintaro, and animated by Madhouse. It draws as much from the classic German film Metropolis as it does from Osamu Tezuka's 1949 manga of the same name, and does not attempt to be faithful to either. However, it was rated on one film site's all-time best animated films

In a Zeerust future, an elderly Japanese detective and his young nephew arrive in Metropolis, the most advanced and wealthiest city in the world, on the trail of a wanted Mad Scientist and organ trafficker. Assigned a robot detective as a guide, they track the man down to a lab in the undercity just to see it destroyed by a Knight Templar with an anti-robot agenda. Out of the wreckage crawls the doctor's greatest achievement, a naked and inhumanly beautiful young girl with apparently no idea who she is, what she is, how she got there or what clothes are. The nephew and the girl then get separated from his uncle when the floor gives way.

As the film unfolds, the detective attempts to find his nephew, the nephew attempts to find out both the nature of the girl and how to escape from the undercity, the city politics take a turn for the worse, and the city's most powerful man seeks the girl as a prop in a somewhat messianic agenda.

This move provides examples of the following: